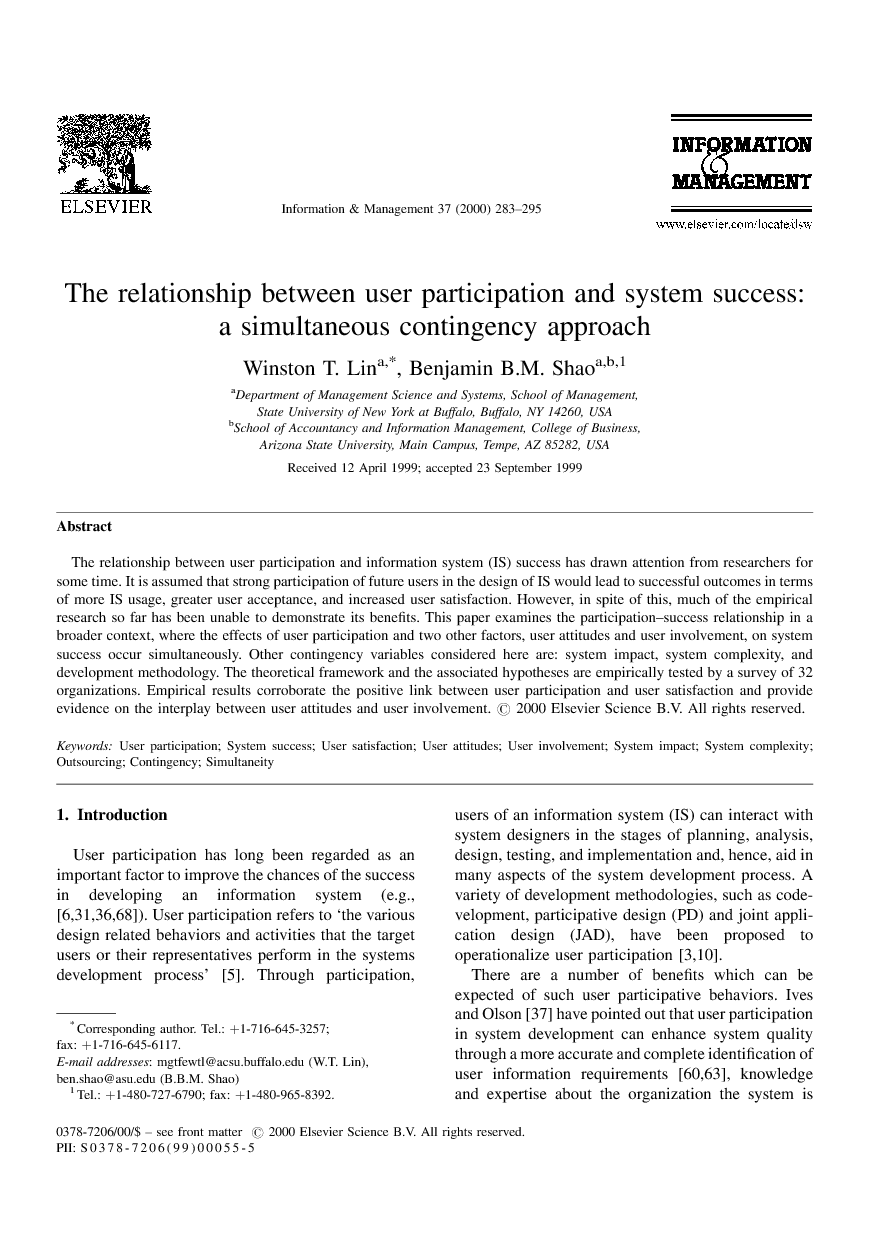 The relationship between user participation and information system (IS) success has drawn attention from researchers for some time. It is assumed that strong participation of future users in the design of IS would lead to successful outcomes in terms of more IS usage, greater user acceptance, and increased user satisfaction. However, in spite of this, much of the empirical research so far has been unable to demonstrate its benefits. This paper examines the participation–success relationship in a broader context, where the effects of user participation and two other factors, user attitudes and user involvement, on system success occur simultaneously. Other contingency variables considered here are: system impact, system complexity, and development methodology. The theoretical framework and the associated hypotheses are empirically tested by a survey of 32 organizations. Empirical results corroborate the positive link between user participation and user satisfaction and provide evidence on the interplay between user attitudes and user involvement.

User participation has long been regarded as an important factor to improve the chances of the success in developing an information system (e.g., [6], [31], [36] and [68]). User participation refers to ‘the various design related behaviors and activities that the target users or their representatives perform in the systems development process’ [5]. Through participation, users of an information system (IS) can interact with system designers in the stages of planning, analysis, design, testing, and implementation and, hence, aid in many aspects of the system development process. A variety of development methodologies, such as codevelopment, participative design (PD) and joint application design (JAD), have been proposed to operationalize user participation [3] and [10]. There are a number of benefits which can be expected of such user participative behaviors. Ives and Olson [37] have pointed out that user participation in system development can enhance system quality through a more accurate and complete identification of user information requirements [60] and [63], knowledge and expertise about the organization the system is intended to support [49], avoidance of unacceptable or unimportant system features, and a better user understanding about the system. User participation is also believed to increase user acceptance of the system with a more realistic expectation about system capabilities [27], an opportunity for users and designers to resolve conflicts about design issues [41], users’ feelings of ownership toward the system, a decrease in user resistance to possible changes incurred by the system, and greater commitment from users [51]. In consequence, user participation has been extensively sought and encouraged by practitioners in developing IS [32]. In the meantime, researchers also have made great efforts to find the empirical evidence of efficacy of user participation in improving system success. However, the reported results have been mixed and fragmented. In an earlier comprehensive review of 22 empirical studies conducted from 1959 to 1981, Ives and Olson were able to identify only eight (36%) that show a positive link between user participation and some measure of system success, including system quality [9] and [24], system usage [68], user behavior/attitudes [1] and [35], and information satisfaction [22], [30] and [38]. The results from other studies are either inconclusive or contrary to expectations. Cavaye [11] has reviewed 19 more recent studies published from 1982 to 1992, but also found only seven (37%) of them can substantiate a positive participation–success relationship [2], [7], [14], [16], [23], [40] and [42]. Despite the fact that 10 more years of research have lapsed, the progress seems to be limited and slow. The findings are still mixed and fragmented. Researchers have identified several possible causes of the ambiguity and contradiction. Poor research methods and the omission of important contextual factors are possible causes [53]. Also a simple direct causal relationship between user participation and system success may not be sufficient. DeBrabander and Edstrom [13] suggested that the context in which the system is being developed has to be considered. Hence, the contingency approach has been widely utilized to address this issue (e.g., [17], [43], [48], [50], [54], [64], [65] and [69]). This is helpful in identifying factors that may alter the consequences of a process. However, most of these models are sequential, with assumed direct causal relationships. Furthermore, it is suggested that several confounding constructs have to be carefully defined to reduce the possibility of confusing results (e.g., [6] and [44]). Hwang and Thorn [34] meta-analyzed 25 studies and found ‘both user involvement and user participation are beneficial, but the magnitude of these benefits much depend on how involvement and its effects are defined’. The purpose of this paper is to explore the relationship between user participation and system success in a broader context where all major effects on system success are simultaneously and jointly determined. Due to the complexity of this scenario, we believe it is beneficial and appropriate to study the relationship by means of a simultaneity and contingency approach.

In the design and development process of a new IS, the effect of user participation on system outcome is supposedly positive but should not be taken for granted. Such an effect must be scrutinized by considering the contextual environment. It is necessary to include the relevant contingency factors that may affect user participation and system success both directly and indirectly. However, it is equally important to notice that the scenario may not be as sequential. A research model based on the contingency approach and the simultaneity analysis was proposed and empirically tested to investigate the proposition that the relationships among the contingent factors are determined simultaneously, rather than sequentially. The estimation results affirm the positive link between user participation and system success, and suggest that user participation, user attitudes, and user involvement form a circular relationship. It implies that getting users involved in the development process may improve their attitudes toward the system and enhance the importance and relevance users perceive about the system. Furthermore, the empirical results show that system complexity has a significant effect on user participation. We conclude by indicating that the simultaneity or interdependence methodology is in sharp contrast with the sequential causality methodology and that the former may be superior in applied MIS research. This research may answer the call of methodological rigor in IS empirical studies. We hope that more answers to this call are forthcoming.