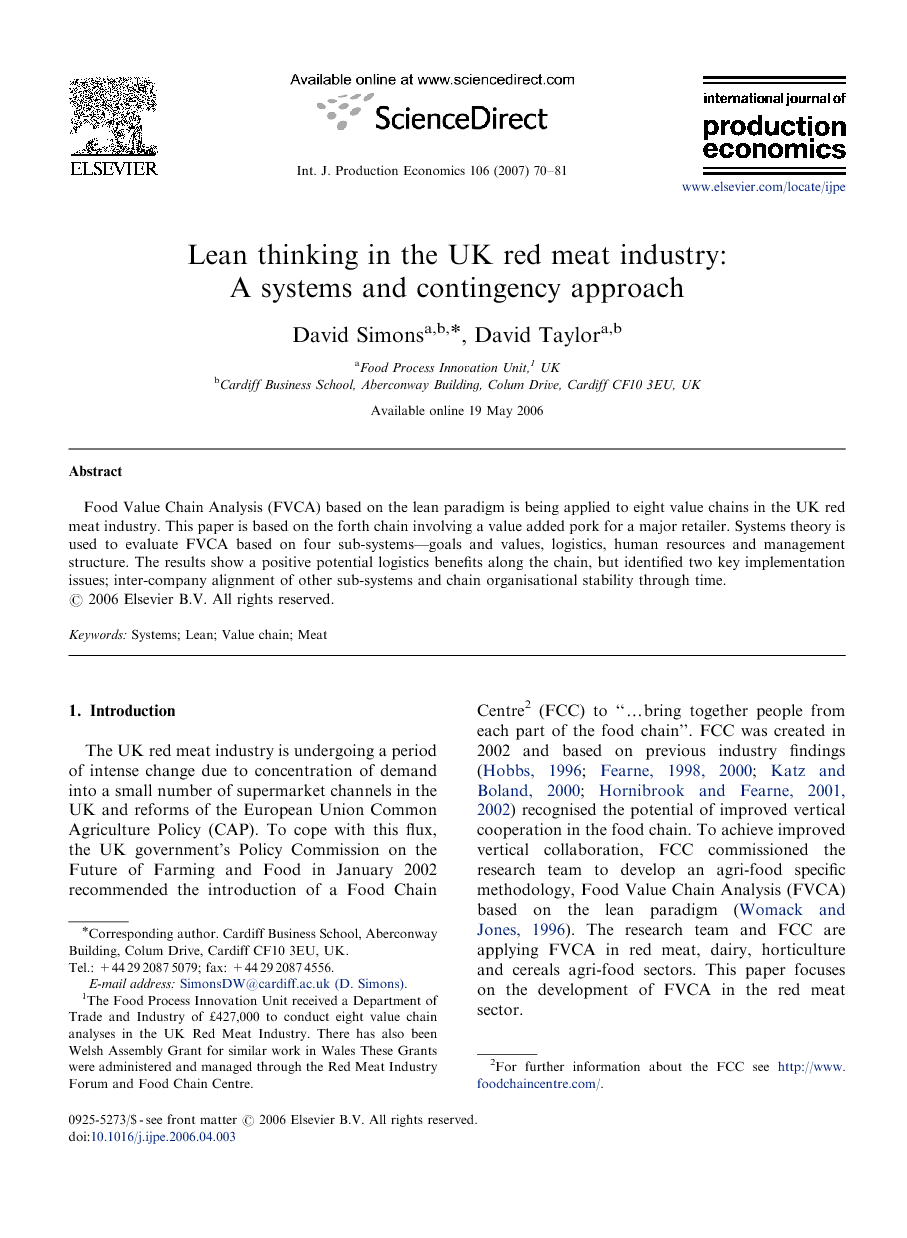 Food Value Chain Analysis (FVCA) based on the lean paradigm is being applied to eight value chains in the UK red meat industry. This paper is based on the forth chain involving a value added pork for a major retailer. Systems theory is used to evaluate FVCA based on four sub-systems—goals and values, logistics, human resources and management structure. The results show a positive potential logistics benefits along the chain, but identified two key implementation issues; inter-company alignment of other sub-systems and chain organisational stability through time.

The UK red meat industry is undergoing a period of intense change due to concentration of demand into a small number of supermarket channels in the UK and reforms of the European Union Common Agriculture Policy (CAP). To cope with this flux, the UK government's Policy Commission on the Future of Farming and Food in January 2002 recommended the introduction of a Food Chain Centre2 (FCC) to “…bring together people from each part of the food chain”. FCC was created in 2002 and based on previous industry findings (Hobbs, 1996; Fearne, 1998 and Fearne, 2000; Katz and Boland, 2000; Hornibrook and Fearne, 2001 and Hornibrook and Fearne, 2002) recognised the potential of improved vertical cooperation in the food chain. To achieve improved vertical collaboration, FCC commissioned the research team to develop an agri-food specific methodology, Food Value Chain Analysis (FVCA) based on the lean paradigm (Womack and Jones, 1996). The research team and FCC are applying FVCA in red meat, dairy, horticulture and cereals agri-food sectors. This paper focuses on the development of FVCA in the red meat sector. FCC linked with the Red Meat Industry Forum3 (RMIF), which was set up in June 2001, with the primary objective of improving the performance and profitability of the UK red meat industry. RMIF have a ten-point action plan, which includes initiatives on benchmarking, process improvement, business relationships and dissemination. FVCA is a key component of this ten-point plan and commenced as a 3-year programme in April 2002, covering eight pilot chains.4 The eight chains were selected to cover the three species (beef, lamb and pork), market channels (supermarkets, foodservice, public services) and products (fresh, organic, value added). The fourth chain selected in the Red Meat Industry Value Chain Analysis project focused on sausages as an example of a value-added pork product. The companies involved were John Easey, a commercial farmer who controls a variety of pig units; Porcofram Marketing—a pig marketing company and a division of BOCM Pauls, Flagship Fresh Meats—operating the abattoir and meat processing plant and part of the Flagship Foods group, Walkers Midshire Food—a sausage producer and a division of Samworth Brothers, and Tesco the retailer. The FVCA methodology is evolving as each chain progresses and the findings are summarised for Chain 1–3 Summary by Simons et al. (2004). Specific methodological issues have also been reported for each chain. Chain 1 (Simons et al., 2003) identified dedicated project representatives from each company to form an effective trusting inter-company team. Chain 2 (Taylor, 2003 and Taylor, 2005); Chain 3 contributed improved data collection process through video techniques (Francis, 2004) and the opportunity for a more effective future state mapping system. The objectives of this paper are as follows: • to outline FVCA methodological developments stemming from Chain 4 particularly in terms of benefits sharing, and identification of supply chain issues for value added pork products; • to discuss the methodological developments in the context of systems and contingency theory; • to report the case method and results; • the final section gives conclusions and suggestions for further research.

This case has further developed FVCA to apply lean principles across the whole supply chain. It has improved FVCA in the areas of adaptation of the tools to participants’ previous experience and benefits sharing. A systematic approach to the development of the ‘Future State Vision’ was shown to output projects aligned to consumer value. These were quantified and subsequently agreed at a cross-company presentation to board level sponsors. The improvements suggested were primarily logistics in nature, but the study demonstrated the importance of aligning the other managerial sub-systems to create trust and confidence in the team. The work in this case study was completed against a backdrop of consistent company ownership and personnel. However since completion of the project there have been some organisational changes in the companies, which underlines the importance of the short 10-day framework. However, following successful value chain analysis, it raises important issues regarding the sustainability of projects, and Fig. 3 shows planned enhancements in future chains including the development of an “organisation and communication map”. More generally it is suggested that this work has contributed in two areas to the understanding of the conditions necessary for successful multi-echelon supply chain improvement subject to contingencies in other sectors. Firstly the proposal that a systems context helps the understanding of supply chain improvement; with tentative evidence from a developing lean based value chain analysis methodology. Managers responsible for supply chain improvement need to be aware of the potential, or indeed likelihood, for misalignment of subsystems between companies. Not only misalignment of logistics subsystems, which has hitherto been the primary focus of many supply chain improvement initiatives, but also, and importantly, of other organisational subsystems including managerial, human resources, goals and values. It is suggested that the real challenge in developing integrated supply chains lies in aligning these other subsystems as much as in proposing efficient logistical processes in terms of physical product flows, information flows or supply chain structural changes. Clear and explicit identification of conflicts in these other subsystems is important in creating an inter-company environment that is conducive to the development and implementation of operational improvements to the logistical sub system. The case study described in this paper has gone some way to addressing these issues particularly in terms of defining whole chain goals and benefit share strategies. However more research is needed to develop methodologies and approaches that can further assist partners in creating an organisational context in which inter-company process improvement can flourish. These issues will be addressed in subsequent case studies within the red meat research project. A second important conclusion arising from the work is the need to take account of time in the supply chain improvement process. Normally when we think of time in the supply chain context it is in terms of time compression either for product innovation, product conversion or order-to-delivery responsiveness. Although these are all important operational objectives, it is suggested that time should be considered in a further dimension, that of the time to undertake the supply chain analysis and improvement programme itself. The 10-day methodology has been developed in response to two issues. Firstly, the need to minimise the use of scarce senior management resource. This is important when it is remembered that each project team is likely to have at least two senior managers from each organisation along the chain, each of whom are involved in the full programme of activities. Consistent commitment of senior management throughout the project is a critical success factor in FVCA and it is therefore necessary to create a framework that participants can be reasonably expected to achieve given their other responsibilities. Secondly, the aim is to complete FCVA within a three-month period. This is particularly important in sectors where there is volatility in supply chain relationships due to industry restructuring as is the case in the UK agri-foods sector. Furthermore the potential for volatility underlines the need for any supply chain improvement approach to be cognisant of the impact of the external environmental supra-system at both during and subsequent to the project.