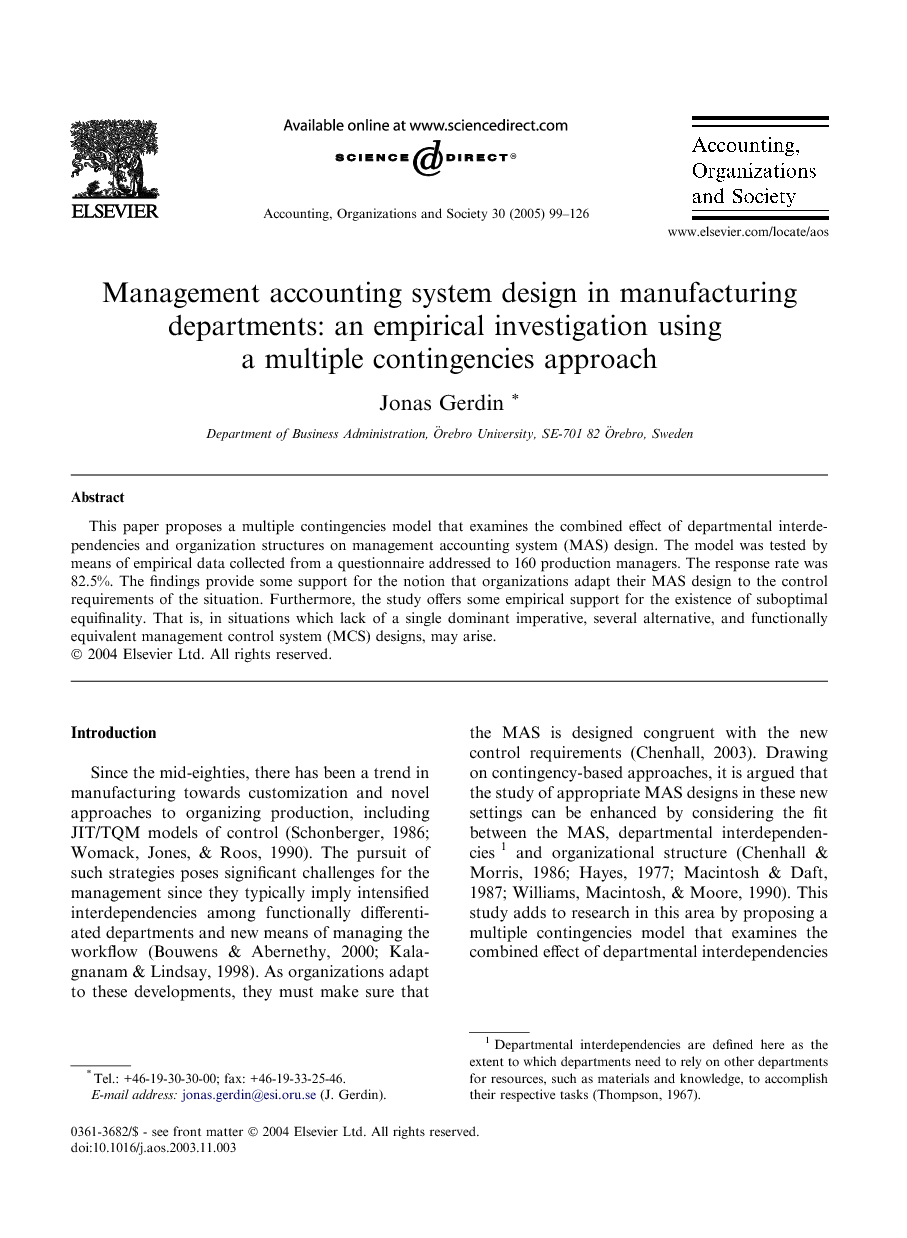 This paper proposes a multiple contingencies model that examines the combined effect of departmental interdependencies and organization structures on management accounting system (MAS) design. The model was tested by means of empirical data collected from a questionnaire addressed to 160 production managers. The response rate was 82.5%. The findings provide some support for the notion that organizations adapt their MAS design to the control requirements of the situation. Furthermore, the study offers some empirical support for the existence of suboptimal equifinality. That is, in situations which lack of a single dominant imperative, several alternative, and functionally equivalent management control system (MCS) designs, may arise.

Since the mid-eighties, there has been a trend in manufacturing towards customization and novel approaches to organizing production, including JIT/TQM models of control (Schonberger, 1986; Womack, Jones, & Roos, 1990). The pursuit of such strategies poses significant challenges for the management since they typically imply intensified interdependencies among functionally differentiated departments and new means of managing the workflow (Bouwens & Abernethy, 2000; Kalagnanam & Lindsay, 1998). As organizations adapt to these developments, they must make sure that the MAS is designed congruent with the new control requirements (Chenhall, 2003). Drawing on contingency-based approaches, it is argued that the study of appropriate MAS designs in these new settings can be enhanced by considering the fit between the MAS, departmental interdependencies1 and organizational structure (Chenhall & Morris, 1986; Hayes, 1977; Macintosh & Daft, 1987; Williams, Macintosh, & Moore, 1990). This study adds to research in this area by proposing a multiple contingencies model that examines the combined effect of departmental interdependencies and organization structure on MAS design. Fig. 1 outlines the proposed model.The multiple contingencies model stems from recognition that the demands placed on MAS design by multiple contingencies may conflict (Fisher, 1995), i.e., attempts to satisfy one demand may mean that other demands cannot be satisfied. It is also explicitly assumed that the need for coordination and control can be met by several alternative, and equifinal, management control system design strategies. The assumption is justified by the long-held view that management control subsystems may not only complement each other but also substitute for each other (Fisher, 1995; Galbraith, 1973; Mintzberg, 1983). Finally, the current study contributes to the management control literature by adopting a more holistic approach than has typically been the case. It is true that a so-called systems approach has been used for some time in the organization design literature (see e.g., Drazin & Van de Ven, 1985; Miller & Friesen, 1984; Mintzberg, 1983). However, very few researchers have looked on the MAS as a system with internal consistency among multiple structural characteristics (see e.g., Chenhall & Langfield-Smith, 1998a; Greve, 1999). The remainder of the paper is structured as follows. The following two sections define the constructs, develop the theoretical model, and conclude with a number of exploratory propositions. The process of data collection and data analysis is then detailed in the fourth section. The results of the study are presented and discussed in the fifth and sixth sections, respectively. The last section contains concluding comments and some suggestions regarding future research.

As a first step, the manufacturing departments were divided into homogeneous groups based on their values for the three variables. The division into sequential and reciprocal interdependence was based on their score on the departmental interdependence instrument, while cluster analysis was used to develop categories of organizational structure and MAS. Fig. 2 shows the dendograms that resulted from the hierarchical cluster procedures.A critical issue in cluster analysis is the determination of the appropriate number of clusters. Unfortunately, no generally accepted criterion exists. Researchers are therefore reduced to using existing theory to identify a natural number of clusters that are interpretable in terms of the research question. However, as a complement, more formal “rules of thumb” can be used. One such method is to examine how the distance between objects within clusters changes (the vertical axes in Fig. 2) as the number of clusters decreases. The idea is to identify the points where within-cluster distance makes a sudden jump. In Fig. 2a two “jumps” were identified––between two and three clusters, and between three and four clusters. Both solutions were examined. The three-cluster solution was chosen because it provided clusters that were consistent with previous research in the area (see also section Definition of constructs above). On the same grounds, the three-cluster solution in Fig. 2b was considered the most interesting (see also section Theory development). The results from the hierarchical clustering procedure were used as cluster seeds in the nonhierarchical clustering. Table 7 shows the results from the K-means clustering. Bold numbers denote the highest scores on each design element while underlined numbers represent the lowest. Since data were standardized (with a mean of 0 and a standard deviation of 1), negative signs mean that the centroid values of the objects contained in the cluster are below average while positive signs denote the opposite.As a second step, the 132 manufacturing departments were categorized with respect to their values on the interdependence variable and the organizational structure variable. For each of the six dependence/structure combinations, it was then examined the extent to which the three MASs identified were used. Table 8 exhibits the observed MAS proportions and the observed frequencies and expected frequencies (inserted in parentheses) within each context. The MASs that are expected to be significantly over-represented in each context are marked with bold numbers while MASs expected to be significantly under-represented are underlined.Several hypotheses were supported.6 For Lateral units experiencing sequential dependence, Broad scope MASs were significantly over-represented (H2b), while Rudimentary MASs were significantly under-represented (H2a). Furthermore, Rudimentary MASs were significantly over-represented among Simple units under conditions of reciprocal interdependence (H6a). In addition, in Simple units facing reciprocal interdependence, the proportion of Broad scope MASs was, as expected, lower than the proportion across the overall sample (H6b). Also for Simple units experiencing sequential interdependence, the proportions of Rudimentary MASs (62%) and Broad scope MASs (19%) differ from their proportions in the overall sample (46% and 33%, respectively) in the proposed direction (H3a and H3b). However, these differences were not statistically significant. Interestingly, none of the three MASs in Functional units facing reciprocal interdependence was significantly over- or under-represented. This corresponds well with the general expectation expressed in H4a–H4c, i.e., that a situation of misfit between interdependence and organization structure and, furthermore, conflicting implications of these variables on MAS design, is likely to lead to design variation rather than similarity. A number of findings in Table 8 did not support the hypotheses set out in section Theory development. Firstly, neither of the expected associations between Functional units experiencing sequential interdependence and Broad scope and Traditional MASs, respectively, was confirmed (cf. H1b and H1c). In fact, the proportion of Traditional MASs (10%) was, in this particular context, below the proportion across all units (21%). Contrary to all expectations, however, Rudimentary MASs were over-represented among these units (cf. H1a). However, the difference was not statistically significant. Secondly, no support was found for the expectation that Traditional MASs should be under-represented among Simple units experiencing sequential or reciprocal interdependence (H3c and H6c). Thirdly, no support was found for the expectation that Rudimentary MASs should be over-represented among Lateral units facing reciprocal interdependence (H5a). In fact, their proportion was lower than would be expected. Interestingly however, the proportion of Traditional MASs was significantly higher in this context compared with its proportion across all cells (cf. H5c). Furthermore, Broad scope MASs were not significantly under-represented in this context, which is contrary to the expectation suggested in H5b.