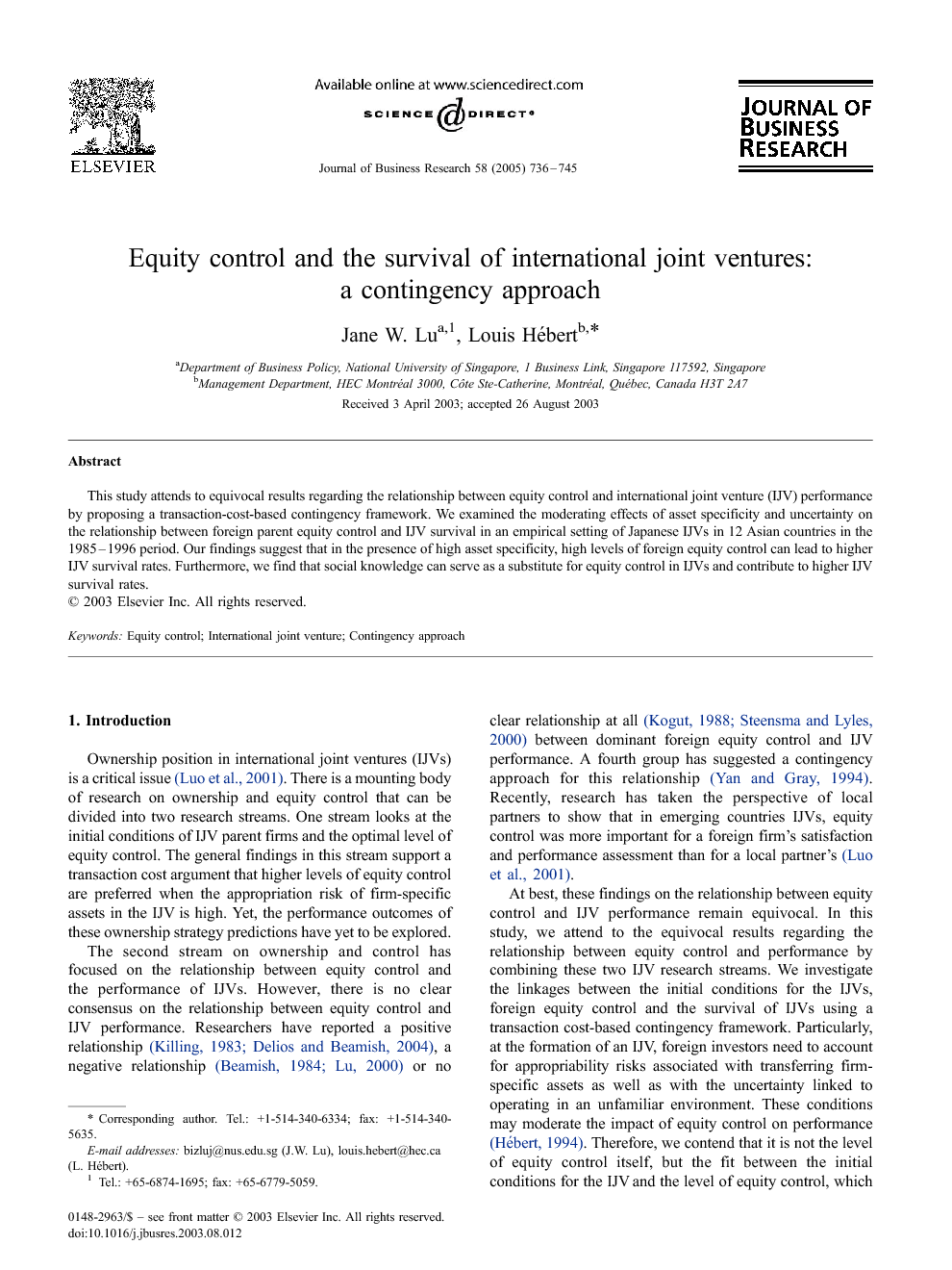 This study attends to equivocal results regarding the relationship between equity control and international joint venture (IJV) performance by proposing a transaction-cost-based contingency framework. We examined the moderating effects of asset specificity and uncertainty on the relationship between foreign parent equity control and IJV survival in an empirical setting of Japanese IJVs in 12 Asian countries in the 1985–1996 period. Our findings suggest that in the presence of high asset specificity, high levels of foreign equity control can lead to higher IJV survival rates. Furthermore, we find that social knowledge can serve as a substitute for equity control in IJVs and contribute to higher IJV survival rates.

This study extends our understanding of the nature of the equity control–IJV performance relationship in IJVs by applying a contingency framework approach to this relationship. We examined whether and how the equity control and IJV performance relationship was contingent on asset specificity and uncertainty factors, as associated with transaction cost theory. We found that the payoffs of control emerged more clearly in the presence of technology-intensive assets where increases in foreign equity control tended to stabilize IJVs. In contrast, when foreign parents had high industry experience, increases in foreign control added to termination risks. This study's analytical framework has important implications for both academics and managers. For the academic literature, our study advanced our understanding and awareness of the importance of contingency factors in the equity control and IJV performance relationship. Our findings exemplify the proposition by Geringer and Hébert (1989) that IJV performance is mainly a function of the fit between a parent firm's strategy and its control structures in its IJVs, rather than solely the direct outcome of the extent of control exercised. This type of contingency framework represents a useful stepping stone for future research in this area. To further our understanding of the relationship between equity control, and other aspects of an IJVs design, and IJV performance, we suggest it will similarly be necessary to look for other contingent factors derived from the application of other theoretical lenses. Turning to the managerial implications, for firms currently involved in, or contemplating involvement in, an IJV, this study highlights some of the key elements in the design of an efficient governance structure in IJVs. One such key element is the need to account for concerns about appropriability hazards, particularly in the presence of technological assets. There are two ways to address this concern. One is to rely on the appropriability regime of the host country to provide protection for the rents from technological assets. The other is to design and negotiate an appropriate governance structure to guard against such hazards. Consistent with recent studies by Oxley, 1997 and Oxley, 1999, our findings suggest that a higher control governance structure would be the most efficient way to combat the appropriability hazards in IJVs involving technological elements and in host countries with weak appropriability regimes. On the other hand, one also needs to consider the costs, such as the constraints on resources, the lack of flexibility and the lack of motivation of local partners to contribute to IJVs that are associated with high levels of equity control by foreign parents. Our results show that higher control structures may not be efficient when there are alternative ways to monitor the behavior of one's IJV partners. Specifically, firms can use social knowledge accumulated through experience as a substitute for equity control. In this way, firms can economize on the costs from high levels of equity ownership and achieve better performance.