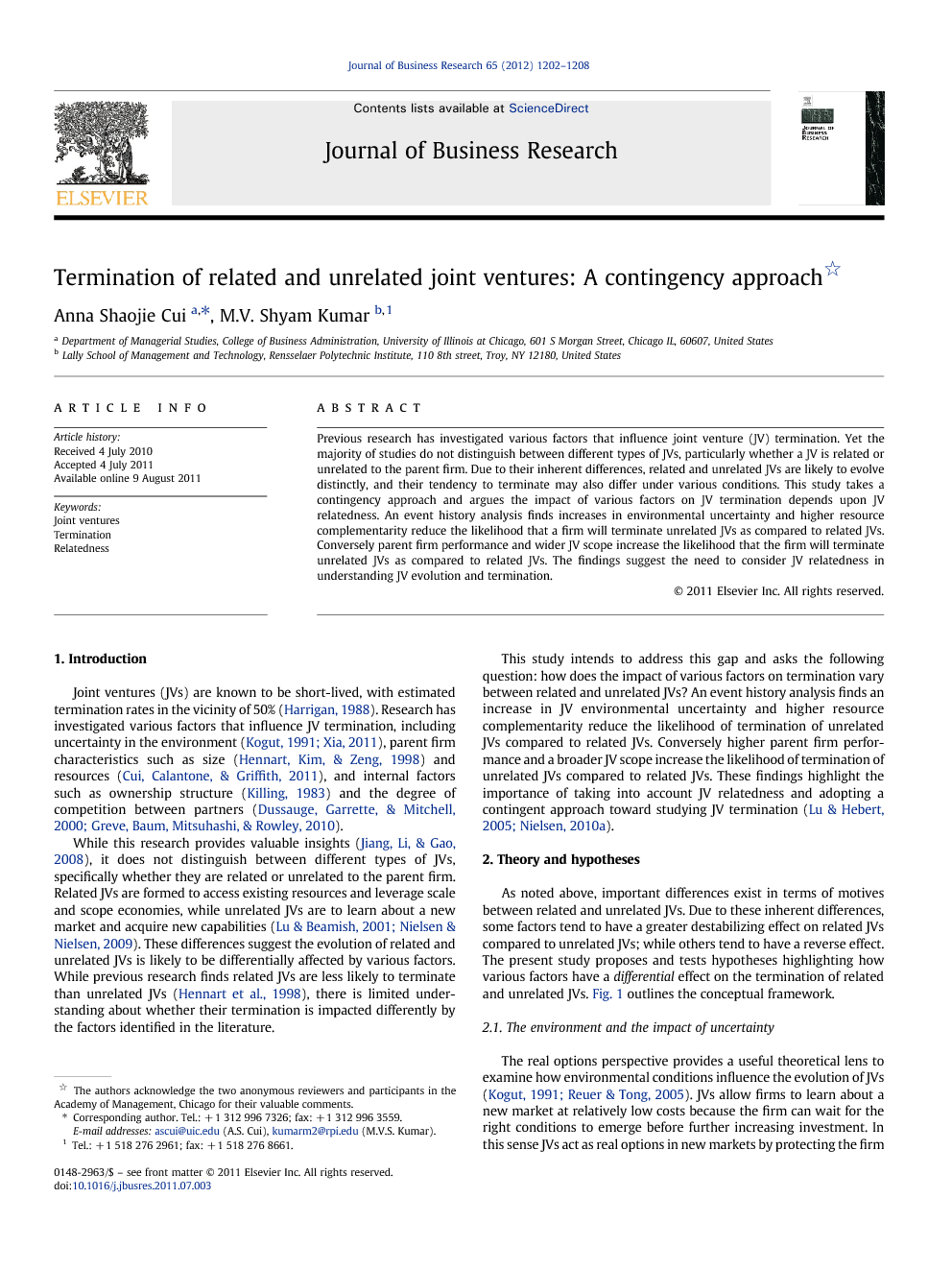 Previous research has investigated various factors that influence joint venture (JV) termination. Yet the majority of studies do not distinguish between different types of JVs, particularly whether a JV is related or unrelated to the parent firm. Due to their inherent differences, related and unrelated JVs are likely to evolve distinctly, and their tendency to terminate may also differ under various conditions. This study takes a contingency approach and argues the impact of various factors on JV termination depends upon JV relatedness. An event history analysis finds increases in environmental uncertainty and higher resource complementarity reduce the likelihood that a firm will terminate unrelated JVs as compared to related JVs. Conversely parent firm performance and wider JV scope increase the likelihood that the firm will terminate unrelated JVs as compared to related JVs. The findings suggest the need to consider JV relatedness in understanding JV evolution and termination.

Joint ventures (JVs) are known to be short-lived, with estimated termination rates in the vicinity of 50% (Harrigan, 1988). Research has investigated various factors that influence JV termination, including uncertainty in the environment (Kogut, 1991 and Xia, 2011), parent firm characteristics such as size (Hennart, Kim, & Zeng, 1998) and resources (Cui, Calantone, & Griffith, 2011), and internal factors such as ownership structure (Killing, 1983) and the degree of competition between partners (Dussauge et al., 2000 and Greve et al., 2010). While this research provides valuable insights (Jiang, Li, & Gao, 2008), it does not distinguish between different types of JVs, specifically whether they are related or unrelated to the parent firm. Related JVs are formed to access existing resources and leverage scale and scope economies, while unrelated JVs are to learn about a new market and acquire new capabilities (Lu and Beamish, 2001 and Nielsen and Nielsen, 2009). These differences suggest the evolution of related and unrelated JVs is likely to be differentially affected by various factors. While previous research finds related JVs are less likely to terminate than unrelated JVs (Hennart et al., 1998), there is limited understanding about whether their termination is impacted differently by the factors identified in the literature. This study intends to address this gap and asks the following question: how does the impact of various factors on termination vary between related and unrelated JVs? An event history analysis finds an increase in JV environmental uncertainty and higher resource complementarity reduce the likelihood of termination of unrelated JVs compared to related JVs. Conversely higher parent firm performance and a broader JV scope increase the likelihood of termination of unrelated JVs compared to related JVs. These findings highlight the importance of taking into account JV relatedness and adopting a contingent approach toward studying JV termination (Lu and Hebert, 2005 and Nielsen, 2010a).

The findings suggest that the effect of various factors on JV termination is contingent upon the JV's relatedness with a parent firm. Previous research on JV termination does not systematically take into account relatedness. The study identifies a range of contingent factors, including environmental uncertainty, parent firm performance, and JV characteristics such as scope and resource complementarity. Hence a failure to take into consideration relatedness may potentially confound important theoretical relationships and lead to an incomplete understanding of JV evolution and termination. The added value of the contingent approach is particularly highlighted when the impact of environmental uncertainty is considered. The findings suggest that the option value embedded in JVs is contingent upon its degree of relatedness (O'Brien & Folta, 2009), and the real option prediction is more applicable to unrelated JVs than related JVs (cf. Cuypers & Martin, 2010). Recently various scholars have called for research identifying the boundary conditions of the real options view (Adner & Levinthal, 2004). The findings support this argument and contribute to the identification of boundary conditions for the real options perspective. Further, the findings shed light on how firms reallocate resources between related and unrelated JVs in response to performance. This study suggests that although performance may create slack resources which facilitate exploration, these effects are outweighed by the incentives to exploit resources in related markets. The findings also suggest that performance can be an antecedent in determining the division of resources between exploration and exploitation, and not just an outcome. Thus the relationship between performance and exploration/exploitation may be more complex than that has been proposed and tested in previous studies. In addition, the findings suggest that JV characteristics such as scope and resource complementarity influence termination differentially based on the JV's relatedness. This study thus provides important insights into what type of conditions and design characteristics are needed to support the stability of related and unrelated JVs. There is a necessity to consider these design characteristics at the formation stage (Mitsuhashi and Greve, 2009 and Shi and Iriyama, 2010). One of the limitations of the study is that only one parent firm is considered. While this is largely due to limited data availability, examining JV termination from the perspective of one parent firm is an approach consistent with previous studies in the literature (Villalonga & McGahan, 2005). Further, the present study employs an aggregate measure of JV relatedness based on SIC codes. While this measure is well accepted in the strategy literature, the measure is an industry level proxy for firm level capabilities. Refinement of the measure of JV relatedness may help more accurately capture the strategic purpose of a JV. In addition to these aspects, other modeling approaches could also be adopted to enhance understanding of JV termination. In particular, multi level modeling enables simultaneous consideration of JV and firm level resources as well as industry level characteristics while accounting for the correlation of error terms at different levels. This study is constrained to a non-nested approach due to the use of event history models. In general however using a nested approach allows for integrating theories at multiple levels more meaningfully (Nielsen, 2010b). Finally, the study shares a common limitation of empirical research on firm strategic decisions. In testing the hypotheses the assumption is that firms make rational and well-informed decisions, while the observed data may not necessarily represent optimal decision making. Thus the observed outcome of JV termination may include firm mistakes of decision making, therefore weakening the test of the hypotheses. Future research could build on the present study by further highlighting the impact of relatedness. For example, an examination can be conducted into how governance structures (for example JV boards) and contracts differ across related and unrelated JVs. Second, future research could also examine other antecedents that influence the degree to which a firm adopts unrelated or related JVs. For example, R&D intensive firms or firms that have a wide portfolio of patents may tend to engage in more unrelated rather than related JVs. In sum, this research demonstrates the importance of a contingent view of JV evolution and termination based on the relatedness of the JV suggesting future efforts to investigate this important area of research.