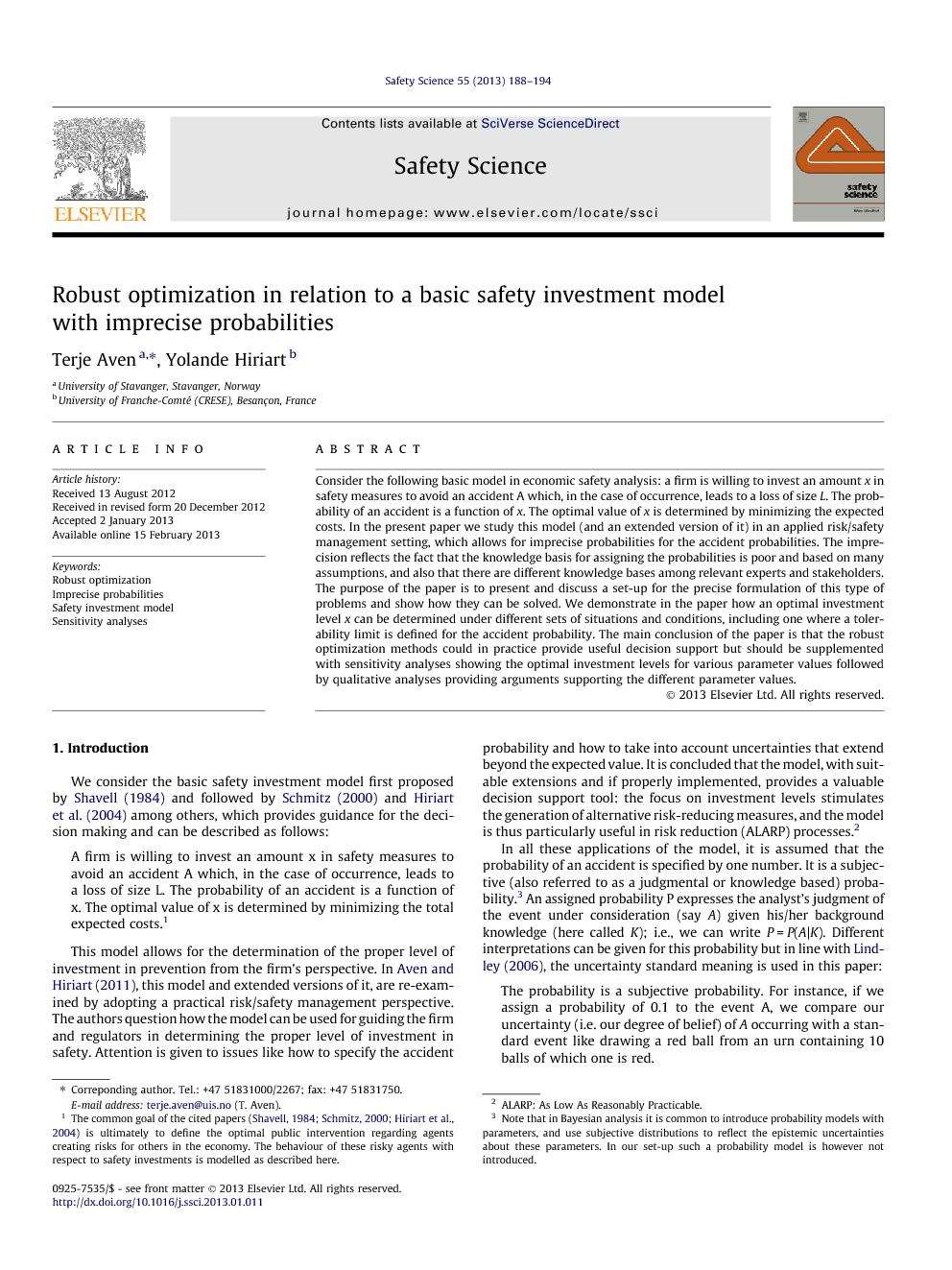 Consider the following basic model in economic safety analysis: a firm is willing to invest an amount x in safety measures to avoid an accident A which, in the case of occurrence, leads to a loss of size L. The probability of an accident is a function of x. The optimal value of x is determined by minimizing the expected costs. In the present paper we study this model (and an extended version of it) in an applied risk/safety management setting, which allows for imprecise probabilities for the accident probabilities. The imprecision reflects the fact that the knowledge basis for assigning the probabilities is poor and based on many assumptions, and also that there are different knowledge bases among relevant experts and stakeholders. The purpose of the paper is to present and discuss a set-up for the precise formulation of this type of problems and show how they can be solved. We demonstrate in the paper how an optimal investment level x can be determined under different sets of situations and conditions, including one where a tolerability limit is defined for the accident probability. The main conclusion of the paper is that the robust optimization methods could in practice provide useful decision support but should be supplemented with sensitivity analyses showing the optimal investment levels for various parameter values followed by qualitative analyses providing arguments supporting the different parameter values.

We consider the basic safety investment model first proposed by Shavell (1984) and followed by Schmitz (2000) and Hiriart et al. (2004) among others, which provides guidance for the decision making and can be described as follows: A firm is willing to invest an amount x in safety measures to avoid an accident A which, in the case of occurrence, leads to a loss of size L. The probability of an accident is a function of x. The optimal value of x is determined by minimizing the total expected costs.1 This model allows for the determination of the proper level of investment in prevention from the firm’s perspective. In Aven and Hiriart (2011), this model and extended versions of it, are re-examined by adopting a practical risk/safety management perspective. The authors question how the model can be used for guiding the firm and regulators in determining the proper level of investment in safety. Attention is given to issues like how to specify the accident probability and how to take into account uncertainties that extend beyond the expected value. It is concluded that the model, with suitable extensions and if properly implemented, provides a valuable decision support tool: the focus on investment levels stimulates the generation of alternative risk-reducing measures, and the model is thus particularly useful in risk reduction (ALARP) processes.2 In all these applications of the model, it is assumed that the probability of an accident is specified by one number. It is a subjective (also referred to as a judgmental or knowledge based) probability.3 An assigned probability P expresses the analyst’s judgment of the event under consideration (say A) given his/her background knowledge (here called K); i.e., we can write P = P(A|K). Different interpretations can be given for this probability but in line with Lindley (2006), the uncertainty standard meaning is used in this paper: The probability is a subjective probability. For instance, if we assign a probability of 0.1 to the event A, we compare our uncertainty (i.e. our degree of belief) of A occurring with a standard event like drawing a red ball from an urn containing 10 balls of which one is red. However, in many situations the basis for assigning the probabilities could be weak, for example concerning the accident probability for a specific investment in our case. A specific number can of course always be assigned, but the rationale for it can be questioned – strong assumptions may be needed to justify a concrete number. The assigned probability is precise, but may be considered rather arbitrary. Other analysts could have produced very different numbers. This type of considerations has led to the use of interval probabilities or imprecise probabilities. This theory generalizes probabilities by using an interval View the MathML source[P̲(A),P¯(A)] to represent uncertainty (degree of belief) about an event A, with lower probability P(A) and upper probability View the MathML sourceP¯(A), where View the MathML source0⩽P̲(A)⩽P¯(A)⩽1. The imprecision in the representation of the event A is defined by View the MathML sourceΔP(A)=P¯(A)-P̲(A). In line with the uncertainty standard interpretation of a subjective probability, we interpret an imprecision interval, say [0.1, 0.5] for the probability P(A) in this way ( Lindley, 2006 and Aven, 2011): the analyst states that his/her assigned degree of belief is greater than the urn chance of 0.10 (the degree of belief of drawing one particular ball out of an urn comprising 10 balls) and less than the urn chance of 0.5. The analyst is not willing to make any further judgments. The use of the imprecision interval is a debated topic in the applied probability literature (see Aven, 2011, for example). This discussion is, however, outside the scope of the present paper. Here we simply assume that an imprecise probability set-up is considered appropriate for reflecting the aspects mentioned above concerning the problems of supporting a specific probability number when the background knowledge is weak. In the paper we re-examine the basic safety investment model and some related extended versions of this model, when allowing for imprecise probabilities. The search for an optimal investment x then becomes a robust optimization problem, and we can apply theory and methods from this area to solve it. This we will do in Section 3 after a brief presentation of the basic investment model with extensions. Section 4 discusses the results as well as the total set-up and approach taken to deal with this type of problem, and the final Section 5 provides some conclusions. The robust optimization field is rather technical, and, to avoid too many details, the examples introduced in Section 3 are rather simple. However, for the purpose of the present paper – which highlights the main ideas – the examples are considered sufficiently informative. Through the examples we are able to conclude on the suitability of the robust optimization methods, and compare this approach with others, in particular one using a sensitivity analysis showing the optimal investment levels for various parameter values, followed by qualitative analyses providing arguments supporting the different parameter values. Extending the models beyond the model set-up defined in Section 3 would not have given us notable new insights on these issues, nor allowed us to present all analytical steps of the analysis. It is a main goal of the present paper to show the safety community what the robust optimization theory and methods can in fact do. It is thus essential that the reader is able to follow each step of the methods. From the set-up and the examples, the analysts get a foundation for the proper formulation of their problems, and a basis for selecting a suitable analysis approach. These issues are highlighted in this paper, not the technicalities linked to various extensions of the basic model. The examples we are using are detailed enough to demonstrate the points we would like to make concerning the suitability of the robust optimization methods in the case studied.

In this paper we have studied a basic economic model (and extended version of it) in an applied risk/safety management setting, which allows for imprecise probabilities for the accident probabilities, reflecting the fact that the knowledge basis for assigning the probabilities is poor and based on many assumptions, and also that there are different knowledge bases among relevant experts and stakeholders. We have formulated a model for this type of problem and, using a simple example, we have shown how different approaches can be used to determine optimal robust solutions. We conclude that the set-up presented for the precise formulation of this type of problem provides a useful platform for getting insights into the need for safety investments. As there are many ways of defining a robust solution, alternative approaches should be applied to inform the decision maker. Also sensitivity analysis showing the optimal investment levels for different parameter values should be presented, followed by a qualitative analysis of the arguments supporting the different parameter values.