عنوان انگلیسی
Overt behavior and ultrasonic vocalization in a fear conditioning paradigm: A dose–response study in the rat
دانلود فوری مقاله + سفارش ترجمه 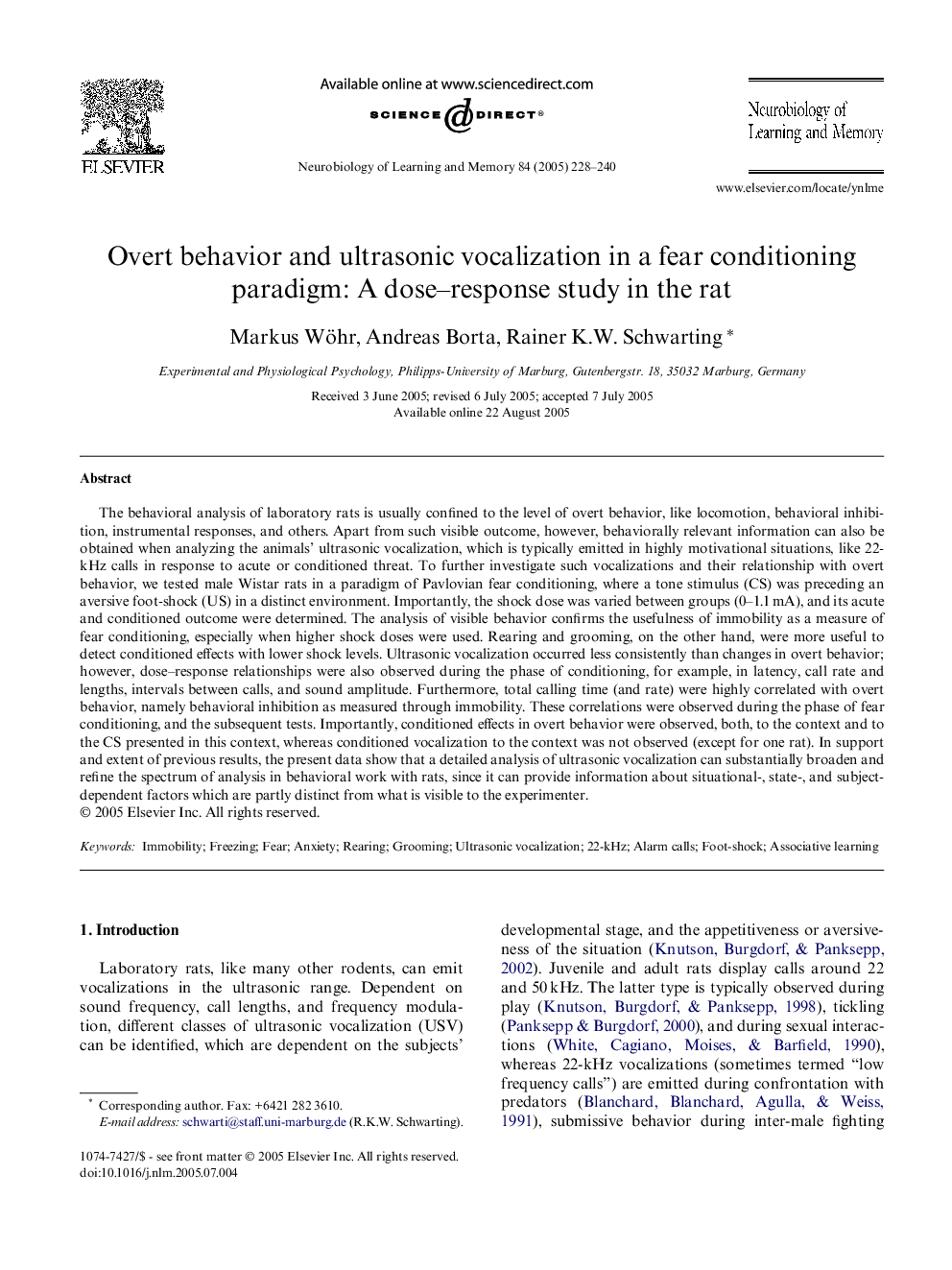 The behavioral analysis of laboratory rats is usually confined to the level of overt behavior, like locomotion, behavioral inhibition, instrumental responses, and others. Apart from such visible outcome, however, behaviorally relevant information can also be obtained when analyzing the animals’ ultrasonic vocalization, which is typically emitted in highly motivational situations, like 22-kHz calls in response to acute or conditioned threat. To further investigate such vocalizations and their relationship with overt behavior, we tested male Wistar rats in a paradigm of Pavlovian fear conditioning, where a tone stimulus (CS) was preceding an aversive foot-shock (US) in a distinct environment. Importantly, the shock dose was varied between groups (0–1.1 mA), and its acute and conditioned outcome were determined. The analysis of visible behavior confirms the usefulness of immobility as a measure of fear conditioning, especially when higher shock doses were used. Rearing and grooming, on the other hand, were more useful to detect conditioned effects with lower shock levels. Ultrasonic vocalization occurred less consistently than changes in overt behavior; however, dose–response relationships were also observed during the phase of conditioning, for example, in latency, call rate and lengths, intervals between calls, and sound amplitude. Furthermore, total calling time (and rate) were highly correlated with overt behavior, namely behavioral inhibition as measured through immobility. These correlations were observed during the phase of fear conditioning, and the subsequent tests. Importantly, conditioned effects in overt behavior were observed, both, to the context and to the CS presented in this context, whereas conditioned vocalization to the context was not observed (except for one rat). In support and extent of previous results, the present data show that a detailed analysis of ultrasonic vocalization can substantially broaden and refine the spectrum of analysis in behavioral work with rats, since it can provide information about situational-, state-, and subject-dependent factors which are partly distinct from what is visible to the experimenter.