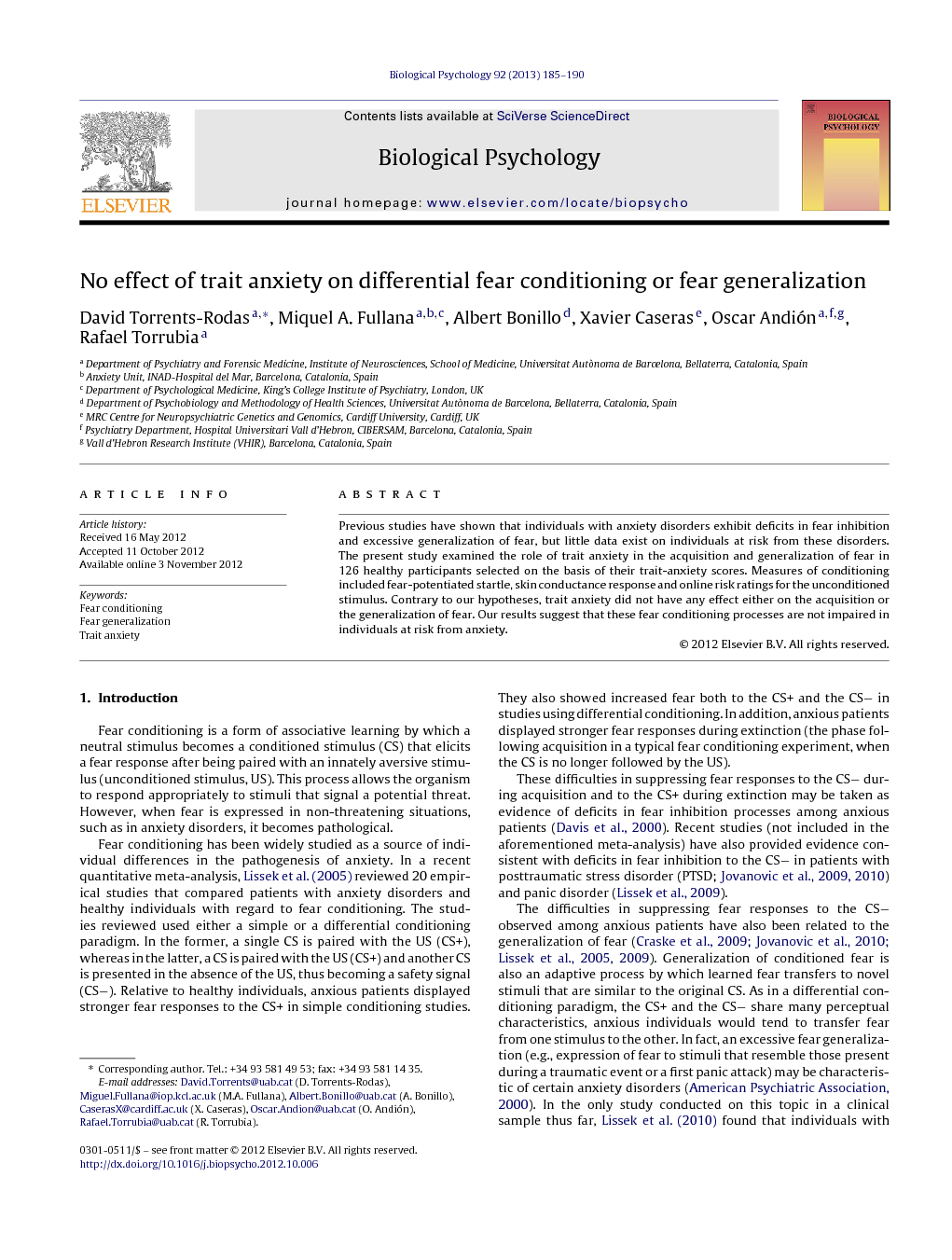 Previous studies have shown that individuals with anxiety disorders exhibit deficits in fear inhibition and excessive generalization of fear, but little data exist on individuals at risk from these disorders. The present study examined the role of trait anxiety in the acquisition and generalization of fear in 126 healthy participants selected on the basis of their trait-anxiety scores. Measures of conditioning included fear-potentiated startle, skin conductance response and online risk ratings for the unconditioned stimulus. Contrary to our hypotheses, trait anxiety did not have any effect either on the acquisition or the generalization of fear. Our results suggest that these fear conditioning processes are not impaired in individuals at risk from anxiety.

Fear conditioning is a form of associative learning by which a neutral stimulus becomes a conditioned stimulus (CS) that elicits a fear response after being paired with an innately aversive stimulus (unconditioned stimulus, US). This process allows the organism to respond appropriately to stimuli that signal a potential threat. However, when fear is expressed in non-threatening situations, such as in anxiety disorders, it becomes pathological. Fear conditioning has been widely studied as a source of individual differences in the pathogenesis of anxiety. In a recent quantitative meta-analysis, Lissek et al. (2005) reviewed 20 empirical studies that compared patients with anxiety disorders and healthy individuals with regard to fear conditioning. The studies reviewed used either a simple or a differential conditioning paradigm. In the former, a single CS is paired with the US (CS+), whereas in the latter, a CS is paired with the US (CS+) and another CS is presented in the absence of the US, thus becoming a safety signal (CS−). Relative to healthy individuals, anxious patients displayed stronger fear responses to the CS+ in simple conditioning studies. They also showed increased fear both to the CS+ and the CS− in studies using differential conditioning. In addition, anxious patients displayed stronger fear responses during extinction (the phase following acquisition in a typical fear conditioning experiment, when the CS is no longer followed by the US). These difficulties in suppressing fear responses to the CS− during acquisition and to the CS+ during extinction may be taken as evidence of deficits in fear inhibition processes among anxious patients (Davis et al., 2000). Recent studies (not included in the aforementioned meta-analysis) have also provided evidence consistent with deficits in fear inhibition to the CS− in patients with posttraumatic stress disorder (PTSD; Jovanovic et al., 2009 and Jovanovic et al., 2010) and panic disorder (Lissek et al., 2009). The difficulties in suppressing fear responses to the CS− observed among anxious patients have also been related to the generalization of fear (Craske et al., 2009, Jovanovic et al., 2010, Lissek et al., 2005 and Lissek et al., 2009). Generalization of conditioned fear is also an adaptive process by which learned fear transfers to novel stimuli that are similar to the original CS. As in a differential conditioning paradigm, the CS+ and the CS− share many perceptual characteristics, anxious individuals would tend to transfer fear from one stimulus to the other. In fact, an excessive fear generalization (e.g., expression of fear to stimuli that resemble those present during a traumatic event or a first panic attack) may be characteristic of certain anxiety disorders (American Psychiatric Association, 2000). In the only study conducted on this topic in a clinical sample thus far, Lissek et al. (2010) found that individuals with panic disorder displayed greater fear generalization than healthy controls. Most studies on individual differences in fear conditioning have been conducted in clinical samples. However, this research strategy has some limitations. First, results may be contaminated by the frequent comorbidity of different anxiety disorders, and of anxiety disorders and other psychiatric conditions (Merikangas & Swanson, 2010). Second, patients with anxiety disorders often follow pharmacological treatments that may interfere with measures of fear conditioning (e.g., Grillon & Baas, 2003) or with the conditioning process itself (Kindt et al., 2009). An alternative to circumvent these limitations is to study fear conditioning in individuals who are at risk from anxiety but do not suffer from a clinically defined anxiety disorder. Elevated trait anxiety is an important risk factor for anxiety disorders (Chambers et al., 2004 and Hettema et al., 2006). However, few studies have aimed to examine individual differences in fear conditioning as a function of trait anxiety. Consistent with the above-mentioned studies in clinical samples, Grillon and Ameli (2001) found deficits in fear inhibition in the presence of safety signals among individuals with high trait anxiety, although the goal of this study was to develop a paradigm to study conditioned inhibition, and the sample size was rather small (only 18 participants were highly anxious individuals). In addition, two recent neuroimaging studies found a significant positive association between trait anxiety and the activation of brain areas that mediated the expression of conditioned fear (Dunsmoor et al., 2011 and Indovina et al., 2011). In the present study, we examined the role of trait anxiety in the acquisition and generalization of fear. Based on previous research, we predicted that individuals with high trait anxiety would show deficits in fear inhibition (i.e., inability to suppress fear responses to CS− in a differential conditioning paradigm). We also predicted that individuals with high trait anxiety would generalize conditioned fear to a greater extent than non-anxious individuals (i.e., would show a more gradual decline in conditioned fear when stimuli ranging in perceptual similarity to the CS+ were presented). We used fear-potentiated startle (FPS), skin conductance response (SCR), and online ratings of risk for US, as measures of fear conditioning.