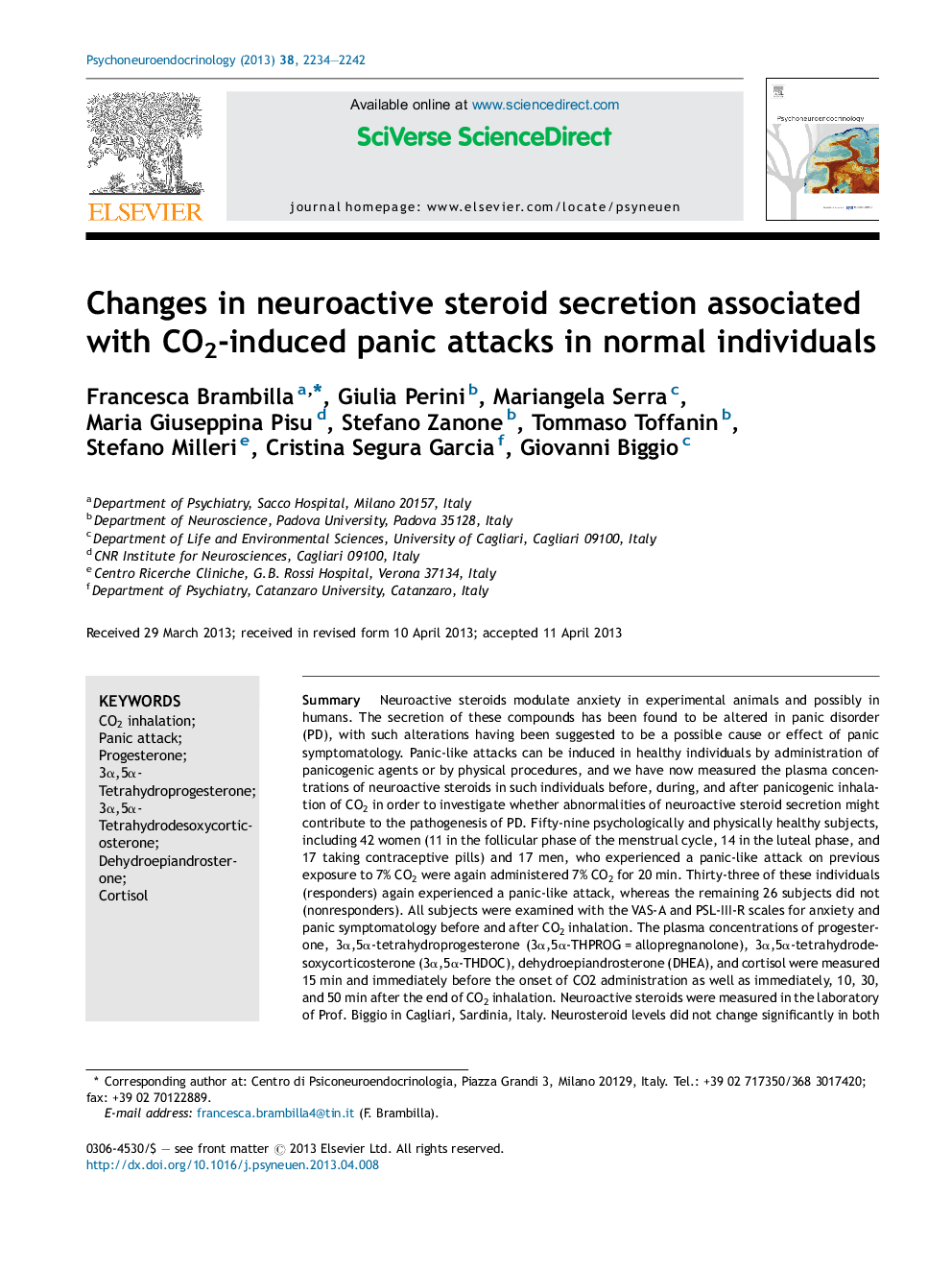 Neuroactive steroids modulate anxiety in experimental animals and possibly in humans. The secretion of these compounds has been found to be altered in panic disorder (PD), with such alterations having been suggested to be a possible cause or effect of panic symptomatology. Panic-like attacks can be induced in healthy individuals by administration of panicogenic agents or by physical procedures, and we have now measured the plasma concentrations of neuroactive steroids in such individuals before, during, and after panicogenic inhalation of CO2 in order to investigate whether abnormalities of neuroactive steroid secretion might contribute to the pathogenesis of PD. Fifty-nine psychologically and physically healthy subjects, including 42 women (11 in the follicular phase of the menstrual cycle, 14 in the luteal phase, and 17 taking contraceptive pills) and 17 men, who experienced a panic-like attack on previous exposure to 7% CO2 were again administered 7% CO2 for 20 min. Thirty-three of these individuals (responders) again experienced a panic-like attack, whereas the remaining 26 subjects did not (nonresponders). All subjects were examined with the VAS-A and PSL-III-R scales for anxiety and panic symptomatology before and after CO2 inhalation. The plasma concentrations of progesterone, 3α,5α-tetrahydroprogesterone (3α,5α-THPROG = allopregnanolone), 3α,5α-tetrahydrodesoxycorticosterone (3α,5α-THDOC), dehydroepiandrosterone (DHEA), and cortisol were measured 15 min and immediately before the onset of CO2 administration as well as immediately, 10, 30, and 50 min after the end of CO2 inhalation. Neuroactive steroids were measured in the laboratory of Prof. Biggio in Cagliari, Sardinia, Italy. Neurosteroid levels did not change significantly in both responders and nonresponders before, during, or after CO2 inhalation. These data suggest that neuroactive steroid concentrations before, during, or after CO2 inhalation do not seem to correlate with panic symptomatology during panic-like attacks in subjects not affected by PD, and they therefore do not support the notion that abnormalities in neuroactive steroid secretion are either a cause or an effect of such attacks.