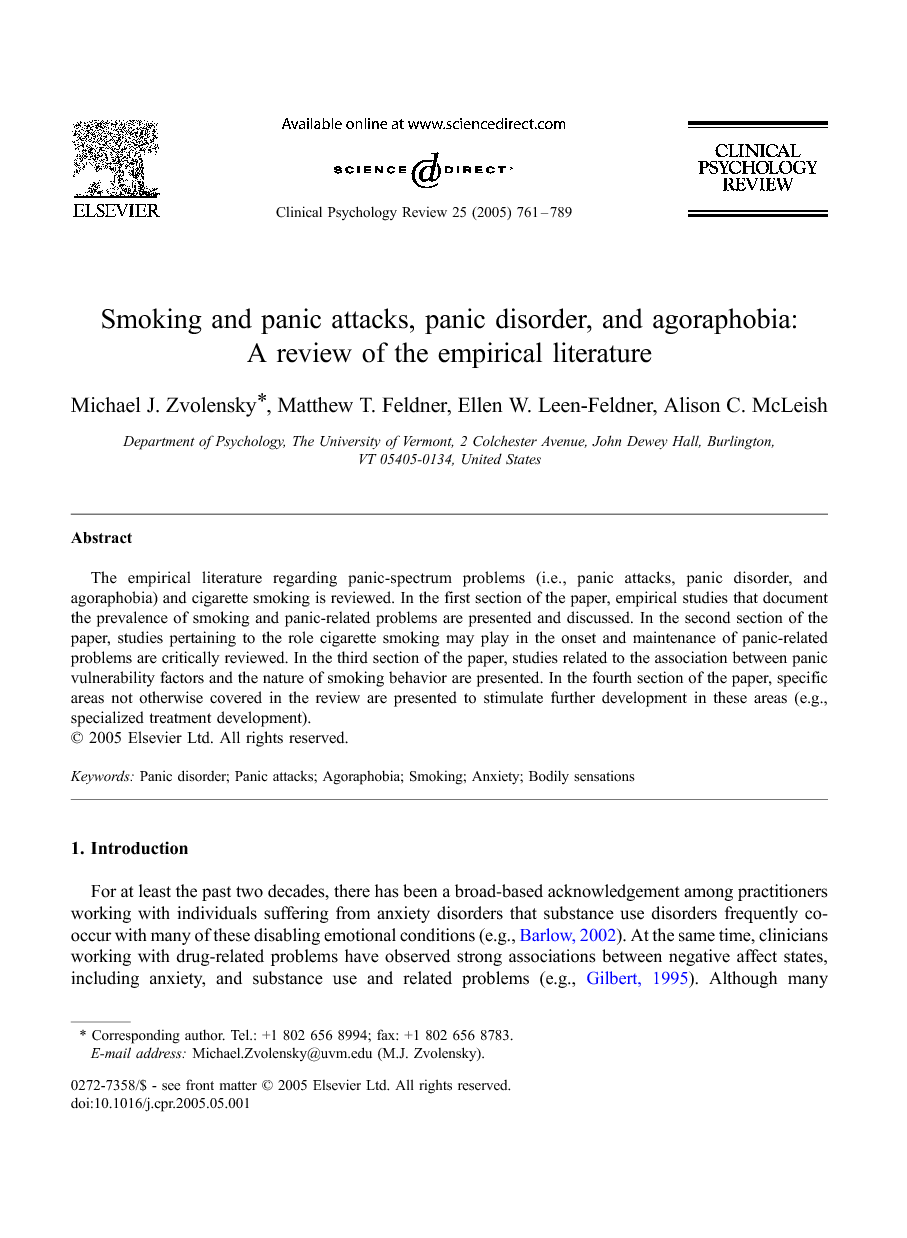 For at least the past two decades, there has been a broad-based acknowledgement among practitioners working with individuals suffering from anxiety disorders that substance use disorders frequently co-occur with many of these disabling emotional conditions (e.g., Barlow, 2002). At the same time, clinicians working with drug-related problems have observed strong associations between negative affect states, including anxiety, and substance use and related problems (e.g., Gilbert, 1995). Although many researchers and clinicians have recognized that comorbidity among psychiatric disorders is a clinically important matter (Brown et al., 1995, Glassman, 1993, Pomerleau, 1997 and Regier et al., 1990), there have been few systematic attempts to better understand the nature of the associations that exist between specific types of anxiety psychopathology and substance use disorders (Zvolensky & Schmidt, 2004). Of work that has been completed, the vast majority has focused on alcohol abuse and dependence in the onset and maintenance of anxiety-related problems (e.g., Bowen et al., 1984, Chambless et al., 1987, Cox et al., 1989 and Hesselbrock et al., 1985; see Kushner, Abrams, & Borchardt, 2000, for a review). There has been strikingly less empirical work on the role of other substance use (e.g., cigarette smoking) that occurs frequently among individuals with, or at risk for, anxiety psychopathology. There are a number of reasons to better understand the associations that exist between tobacco use and anxiety disorders. First, although cigarette smoking in the United States has stabilized in the recent past, the prevalence of this behavioral problem remains high and is a leading contributor to premature death and disability (Breslau et al., 2001 and United States Department of Health and Human Services, 2000). Indeed, over 45 million American adults currently smoke cigarettes and available evidence suggests that cessation attempts typically meet with a lack of success (Centers for Disease Control and Prevention [CDC], 2002). Moreover, smoking problems are not limited to adults. Empirical work suggests cigarette use among youth (e.g., adolescents in high school) is substantial, with almost 21% of high school seniors smoking on a daily basis (Johnson et al., 2000) and typically smoking for many years thereafter (i.e., greater than 15 years, on average, for both males and females; Pierce & Gilpin, 1996). Second, although the dangers of smoking are well-publicized in the United States, the formal recognition that many individuals with anxiety disorders smoke cigarettes has only garnered scientific attention in recent years (Pohl, Yeragani, Balon, Lycaki, & McBride, 1992) and most of this work has been focused on panic disorder. In fact, up through the early 1990s, much of the panic–smoking work was restricted to a small number of anecdotal reports (e.g., Brodsky, 1985, Dilsaver, 1987, Maany et al., 1987 and Yeragani et al., 1988). Thus, relatively little has been known about the nature of the panic–smoking relation, including how these variables relate to one another across particular developmental stages (e.g., onset, maintenance, and relapse). Drawing from extant empirical work and conceptual models, there is reason to suspect that these behavioral conditions may negatively impact one another in a variety of ways (e.g., bi-directional negative effects; Zvolensky, Schmidt, & Stewart, 2003). Third, to the extent that smoking and anxiety problems negatively impact one another, intervention strategies (prevention and treatment) for these conditions should address these factors. That is, there may be a need for specialized intervention programs to target anxiety-related processes among tobacco smokers and vice versa. Finally, by better understanding the nature of the association between smoking and anxiety problems, advances will be made in understanding the processes underlying comorbidity between anxiety disorders and substance use disorders more generally. Specifically, theory and research from this domain of study could guide work on other drug-related problems (e.g., marijuana, heroin) that have not received an appreciable degree of scientific attention in relation to anxiety psychopathology. Given this backdrop, the purpose of the present paper is to review the empirical literature on the relation between panic-spectrum problems (i.e., panic attacks, panic disorder, and agoraphobia) and cigarette smoking. Whereas earlier conceptual work suggested possible meaningful associations between panic disorder and smoking (Zvolensky et al., 2003 and Zvolensky et al., 2003), the present paper explicitly reviews empirical work related to such a conceptualization and highlights major findings of this literature not previously addressed. In the first section, we review empirical studies that document the comorbidity of smoking and panic-related problems. In the second section, we critically review studies pertaining to the role cigarette smoking may play in the onset and maintenance of panic-related problems. Third, we review studies of the role that panic vulnerability factors play in smoking initiation, maintenance, and relapse. In the final section, we highlight specific relevant areas not previously covered in other sections that should be addressed in future work.