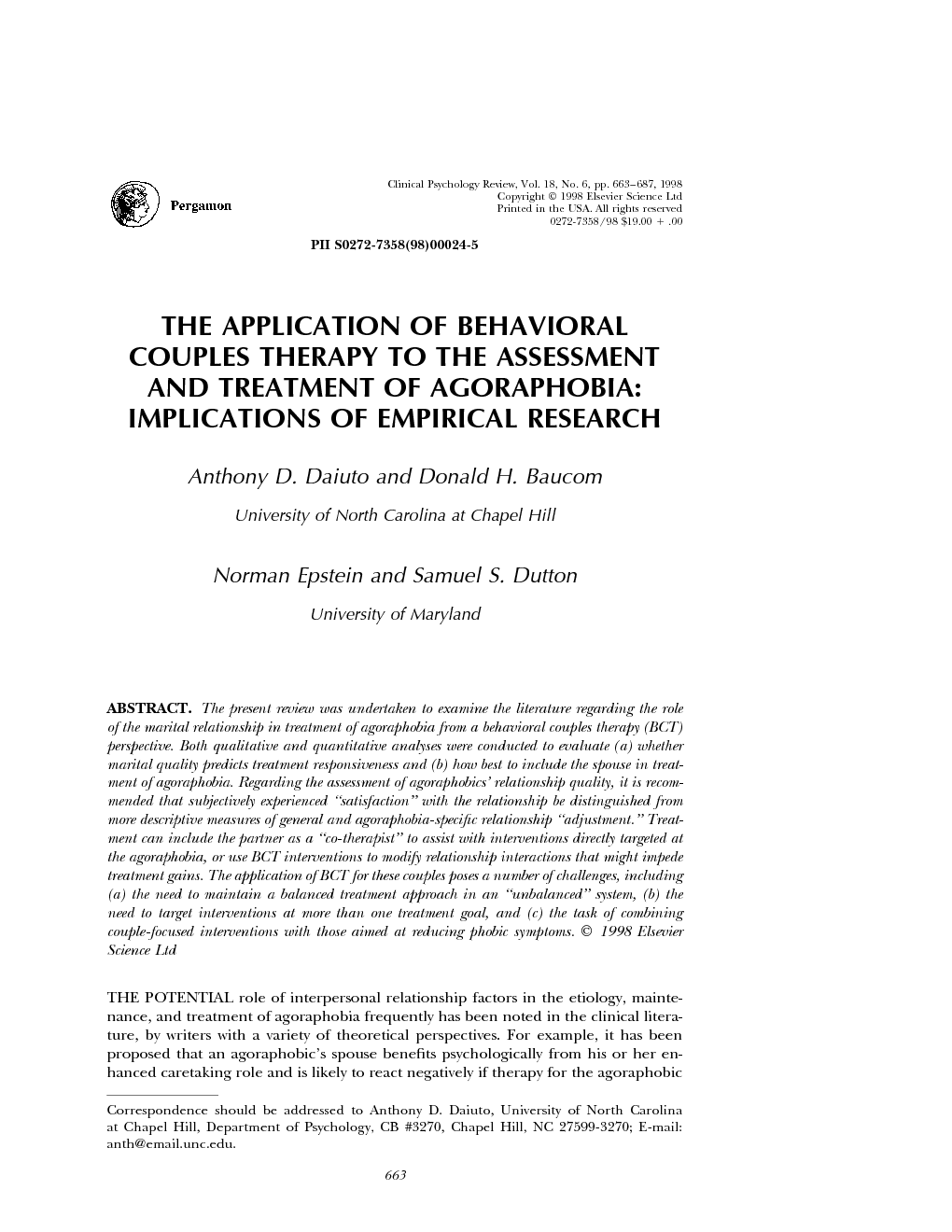 The present review was undertaken to examine the literature regarding the role of the marital relationship in treatment of agoraphobia from a behavioral couples therapy (BCT) perspective. Both qualitative and quantitative analyses were conducted to evaluate (a) whether marital quality predicts treatment responsiveness and (b) how best to include the spouse in treatment of agoraphobia. Regarding the assessment of agoraphobics’ relationship quality, it is recommended that subjectively experienced “satisfaction” with the relationship be distinguished from more descriptive measures of general and agoraphobia-specific relationship “adjustment.” Treatment can include the partner as a “co-therapist” to assist with interventions directly targeted at the agoraphobia, or use BCT interventions to modify relationship interactions that might impede treatment gains. The application of BCT for these couples poses a number of challenges, including (a) the need to maintain a balanced treatment approach in an “unbalanced” system, (b) the need to target interventions at more than one treatment goal, and (c) the task of combining couple-focused interventions with those aimed at reducing phobic symptoms.

THE POTENTIAL role of interpersonal relationship factors in the etiology, maintenance, and treatment of agoraphobia frequently has been noted in the clinical literature, by writers with a variety of theoretical perspectives. For example, it has been proposed that an agoraphobic’s spouse benefits psychologically from his or her enhanced caretaking role and is likely to react negatively if therapy for the agoraphobic partner leads to improved functioning and less dependence (e.g., Goodstein & Swift 1977 and Hand & Lamontagne 1976). Bowlby (1973) theorized that agoraphobia develops from insecure attachment styles that become problematic adult working models for interpersonal relationships. Others have noted that conflicts over traditional sex roles within a marriage are resolved by agoraphobia Hafner 1986 and Shean 1990, as are ultimate stay/leave decisions for unassertive members of unsatisfactory marriages (Goldstein & Chambless, 1978). From a treatment perspective, those who have taken a cognitive-behavioral approach to intervention for agoraphobia (graded exposure, sometimes in combination with cognitive restructuring) often have enlisted the help of the spouse as a “cotherapist” based on the idea that the patient’s compliance with exposure homework assignments will be greater, and his or her general level of stress from marital conflict will be lower, when the patient is actively supported (and guided in the homework as needed) by the spouse (e.g., Barlow, O’Brien, & Last, 1984). The marital satisfaction of the nonagoraphobic spouse also is expected to increase (in contrast to the above psychodynamic view) as he or she gains empathy with the anxious partner’s experience and gradually is freed from the burdens of the caretaker role. Furthermore, because spouse-assisted exposure protocols tend to emphasize collaboration between the partners, this involvement may impact their relationship in positive ways (e.g., the nonagoraphobic partner increasingly encourages the spouse’s independence and cooperates less with avoidance behavior). However, there is no existing evidence documenting either positive or negative effects of spouse-assisted exposure on specific interaction patterns in couples’ overall relationships. After nearly four decades of speculation and debate about the role of the marital relationship in the treatment of agoraphobia, a number of recent reviews have attempted to summarize the empirical findings in this area. Following their meta-analytic review, Dewey and Hunsley (1990) concluded that (a) higher pretreatment relationship quality of the patient was associated with a greater reduction in agoraphobic symptomatology up to one year following treatment and (b) the effectiveness of “spouse-involved” exposure treatment was not significantly different from the effectiveness of “spouse noninvolved” exposure treatments. In a largely qualitative review that included limited quantitative analyses, Emmelkamp and Gerlsma (1994) concurred with the latter finding, but concluded that the effect of pretreatment marital quality on agoraphobic outcome is unclear. In their qualitative summary of the literature, Carter, Turovsky, and Barlow (1994) concluded that the quality of agoraphobics’ marital relationships predicts treatment outcome but, in contrast to the other reviewers, suggested that involving the partner in treatment may be more effective than treating the patient alone. The lack of conclusive findings regarding the impact of the marital relationship in treatment for agoraphobia has led some reviewers to suggest that the role of agoraphobics’ marital relationships should be de-emphasized in favor of a focus on the role of more broadly defined social support factors in treatment Carter et al. 1994 and Fokias & Tyler 1995. However, despite the suggestion that a continued emphasis on the marital relationship is not likely to be fruitful, there is consensus that methodological and conceptual limitations have hampered attempts to elucidate the association between marital functioning and treatment for agoraphobia. For example, it has been noted in all of the above reviews that the field has not adequately conceptualized and assessed the quality of agoraphobics’ marital relationships. Similarly, although investigators have speculated that couples therapy for agoraphobia may be efficacious, there has been little agreement about how to include the partner in therapy. Thus, without a clear articulation of relevant relationship factors to guide them, most investigators have simply used the spouses of agoraphobics as “co-therapists” in exposure therapy, without exploring the numerous ways in which the marital environment could potentially interfere with progress in treatment or be utilized to enhance outcome. Given these limitations, it seems worthwhile to consider that the field’s inconsistent and inconclusive empirical findings to date reflect a limited understanding of the marital functioning of agoraphobic patients that has obscured the need to explicitly address relationship issues as part of the treatment for agoraphobia.