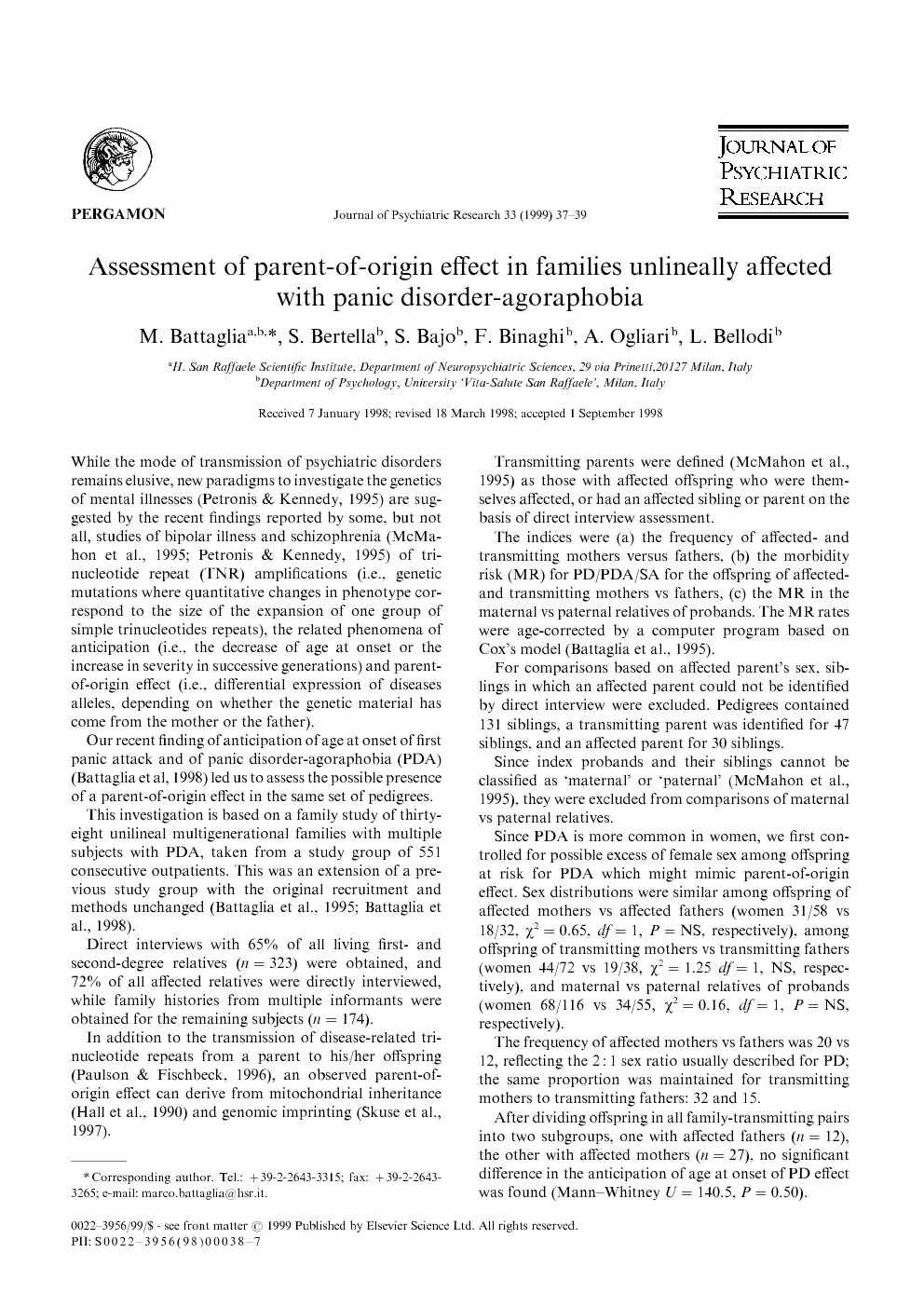 While the mode of transmission of psychiatric disorders remains elusive, new paradigms toinvestigate the genetics of mental illnesses (Petronis and Kennedy, 1995) are suggested bythe recent findings reported by some, but not all, studies of bipolar illness and schizophrenia (McMahon et al., 1995; Petronis and Kennedy, 1995) of trinucleotide repeat (TNR)amplifications (i.e., genetic mutations where quantitative changes in phenotype correspond to thesize of the expansion of one group of simple trinucleotides repeats), the related phenomena ofanticipation (i.e., the decrease of age at onset or the increase in severity in successive generations)and parent-of-origin effect (i.e., differential expression of diseases alleles, depending on whetherthe genetic material has come from the mother or the father). Our recent finding ofanticipation of age at onset of first panic attack and of panic disorder-agoraphobia (PDA) (Battaglia et al, 1998) led us to assess the possible presence of a parent-of-origin effect in the sameset of pedigrees. This investigation is based on a family study of thirty-eight unilinealmultigenerational families with multiple subjects with PDA, taken from a study group of 551consecutive outpatients. This was an extension of a previous study group with the originalrecruitment and methods unchanged (Battaglia et al., 1995; Battaglia et al, 1998).

Direct interviews with 65% of all living first- and second-degree relatives (n = 323) were obtained, and 72% of all affected relatives were directly interviewed, while familyhistories from multiple informants were obtained for the remaining subjects (n = 174). In addition to the transmission of disease-related trinucleotide repeats from a parent tohis/her offspring (Paulson and Fischbeck, 1996), an observed parent-of- origin effect canderive from mitochondrial inheritance (Hall, 1990) and genomic imprinting (Skuse et al., 1997). Transmitting parents were defined (McMahon et al., 1995) as thosewith affected offspring who were themselves affected, or had an affected sibling or parent on thebasis of direct interview assessment. The indices were (a) the frequency of affected- andtransmitting mothers versus fathers, (b) the morbidity risk (MR) for PD/PDA/SA for the offspringof affected- and transmitting mothers vs fathers, (c) the MR in the maternal vs paternal relatives ofprobands. The MR rates were age-corrected by a computer program based on Coxs model (Battaglia et al., 1995). For comparisons based on affected parents sex, siblings in whichan affected parent could not be identified by direct interview were excluded. Pedigrees contained131 siblings, a transmitting parent was identified for 47 siblings, and an affected parent for 30siblings. Since index probands and their siblings cannot be classified as maternal orpaternal (McMahon et al., 1995), they were excluded from comparisons of maternal vspaternal relatives. Since PDA is more common in women, we first controlled for possibleexcess of female sex among offspring at risk for PDA which might mimic parent-of-origin effect.Sex distributions were similar among offspring of affected mothers vs affected fathers (women31/58 vs 18/32, χ2 = 0.65, df = 1, P = NS, respectively),among offspring of transmitting mothers vs transmitting fathers (women 44/72 vs 19/38, χ2 = 1.25 df = 1, NS, respectively), and maternal vs paternal relativesof probands (women 68/116 vs 34/55, χ2 = 0.16, df = 1, P = NS, respectively). The frequency of affected mothers vs fathers was 20 vs 12,reflecting the 2 : 1 sex ratio usually described for PD; the same proportion was maintained fortransmitting mothers to transmitting fathers: 32 and 15. After dividing offspring in allfamily-transmitting pairs into two subgroups, one with affected fathers (n = 12), the otherwith affected mothers (n = 27), no significant difference in the anticipation of age at onsetof PD effect was found (Mann–Whitney U = 140.5, P = 0.50). Table 1 shows the results of the other comparisons: all differences are nonsignificant. When analyses wererepeated after the exclusion of subjects with SA, or for PD/PDA alone, all differences remainednonsignificant. Table 1. Age-corrected morbidity risks (MR) for Panic Disorder-Agoraphobia of maternalvs paternal relatives in thirty-eight pedigrees multiply affected with Panic Disorder Maternal line Paternal line Number affected/ MR Number affected/ MR z p number affected+ number affected+ number at risk number at risk Offspring of affected parents 35/53.8 0.649 18/27.04 0.665 0.10 0.92 Offspring of transmitting parents 36/65.09 0.553 21/31.01 0.677 0.93 0.35 Relatives of probands 37/121.89 0.304 19/47.70 0.398 1.1 0.31 Comparisons by test for the difference between two proportions, two tailed. Index probands and their siblings were excluded from analyses. Table options No suggestion of parent-of-origin effect (including possiblemitochondrial inheritance, since several examples of transmitting fathers were observed) was foundthrough different comparison schemes applied to 38 unilineal pedigrees multiply affected withPD/PDA. This points to the issue of whether the absence of a clear parent-of-origin effecton familial risks would, or would not, strongly argue against genuine anticipation in PD/PDA, sincethe presence of parent-of-origin effect is thought to be important to corroborate a finding ofanticipation (Ridley et al., 1991). While the large majority of known unstableDNA diseases consistently show the TNR-anticipation-parent-of-origin effect phenomena (Paulson and Fischbeck, 1996), some noteworthy exceptions are becoming available and suggestgreater complexity than previously thought. For instance, spinocerebellar ataxia type 2 is very likelyto be a TNR disease (Petronis and Kennedy, 1995) in which anticipation, but noparent-of-origin effect, has been reported (Pulst et al., 1993). In bipolar disorder andschizophrenia evidence both in favour of and against, anticipation and parent-of-origin effect havebeen reported (Petronis and Kennedy, 1995), with some groups admitting anticipation evenwithout evidence of parent-of-origin effect (Petronis et al., 1995). It should alsobe remembered that the specific type of parent-of-origin effect named genomic imprinting is acrucial mechanism only with mendelian anticipating disorders (Hall, 1990; Petronis et al., 1995). With complex polygenic disorders several genes are thought to be involved in thetransmission of the liability to a disease: if a proportion of these genes have a maternal imprinting,and another proportion a paternal imprinting, the detection of an imprinting effect becomes exposedto both false-negative and false-positive results, or even be misleading, while the anticipation effectwould still operate (Petronis et al., 1995). With negative results, an importantissue is that of the power of analysis, and one may wonder to what extent this sample size may beresponsible for these findings. While the TNR paradigm is interesting and is gainingbetter definition as more exceptions to its rules come to our knowledge, the neuropsychiatricdisorders remain complex domains in which the intrinsic heuristic value of anticipation needs beevaluated and absence of parent-of-origin effect needs prudent consideration.