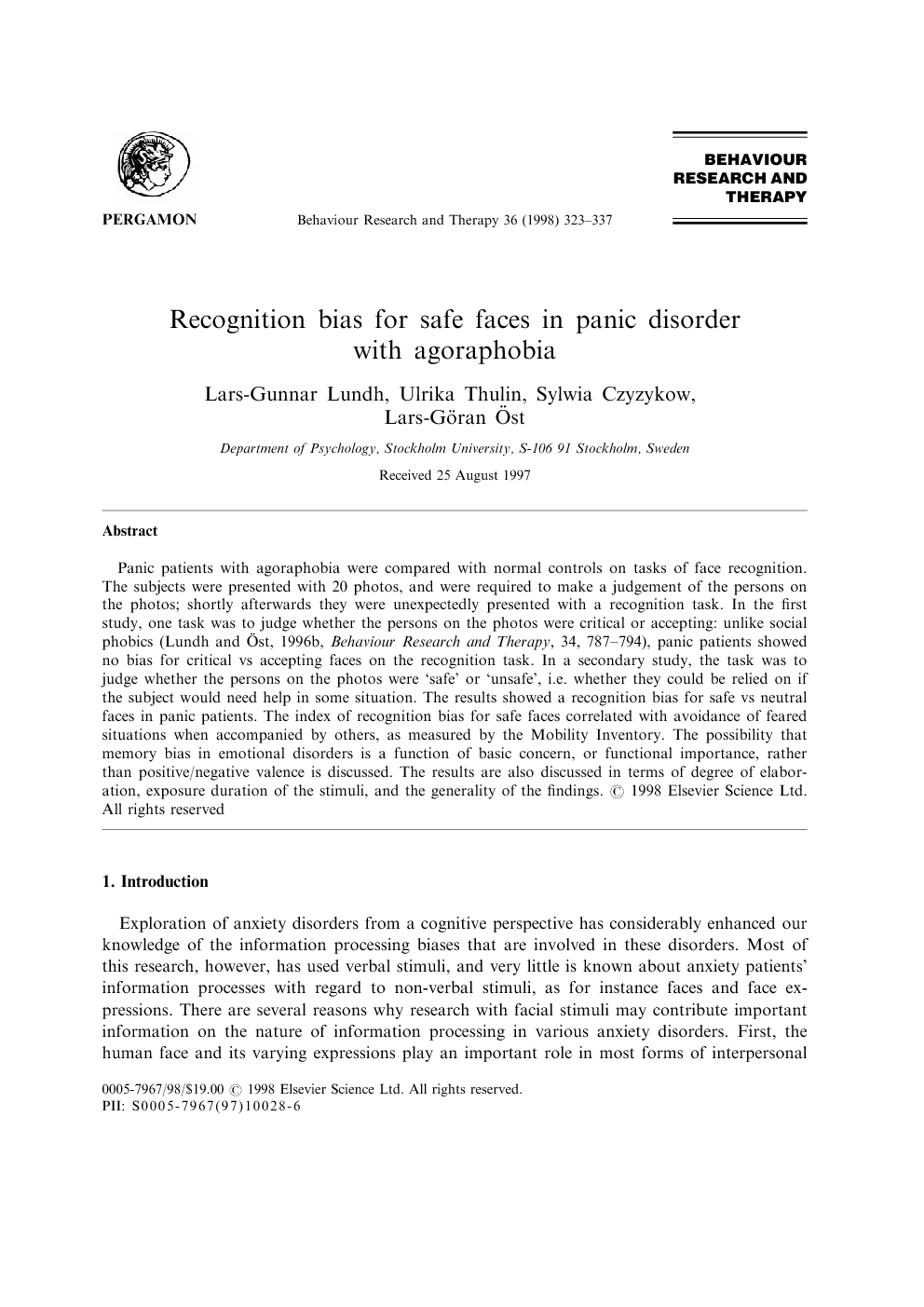 Panic patients with agoraphobia were compared with normal controls on tasks of face recognition. The subjects were presented with 20 photos, and were required to make a judgement of the persons on the photos; shortly afterwards they were unexpectedly presented with a recognition task. In the first study, one task was to judge whether the persons on the photos were critical or accepting: unlike social phobics (Lundh and Öst, 1996b, Behaviour Research and Therapy, 34, 787–794), panic patients showed no bias for critical vs accepting faces on the recognition task. In a secondary study, the task was to judge whether the persons on the photos were ‘safe’ or ‘unsafe’, i.e. whether they could be relied on if the subject would need help in some situation. The results showed a recognition bias for safe vs neutral faces in panic patients. The index of recognition bias for safe faces correlated with avoidance of feared situations when accompanied by others, as measured by the Mobility Inventory. The possibility that memory bias in emotional disorders is a function of basic concern, or functional importance, rather than positive/negative valence is discussed. The results are also discussed in terms of degree of elaboration, exposure duration of the stimuli, and the generality of the findings.

Exploration of anxiety disorders from a cognitive perspective has considerably enhanced our knowledge of the information processing biases that are involved in these disorders. Most of this research, however, has used verbal stimuli, and very little is known about anxiety patients’ information processes with regard to non-verbal stimuli, as for instance faces and face expressions. There are several reasons why research with facial stimuli may contribute important information on the nature of information processing in various anxiety disorders. First, the human face and its varying expressions play an important role in most forms of interpersonal interaction, and to the extent that the various anxiety disorders involve some kind of interpersonally related fear, cognitive research with facial stimuli may contribute towards an understanding of these disorders. Second, Ss’ encoding activities are more amenable to experimental control with concrete stimuli like human faces than with abstract verbal stimuli (Lundh and Öst, 1996b); a S can be given various kinds of encoding tasks while looking at specific human faces, and the effects of these encoding activities can then be studied. Social phobia is an anxiety disorder which, by definition, involves an interpersonally related fear. The basic fear in social phobia is about being negatively evaluated by others. In accordance with this, Lundh and Öst (1996b) found that social phobics had a bias for critical vs accepting faces on a face recognition task. The Ss were shown 20 photos of faces and were asked to rate the degree to which they experienced the persons on the photos as ‘critical’ or ‘accepting’. When the Ss were given a recognition task 5 min later, the social phobics had a clear bias for critical faces, whereas the controls had an opposite bias for accepting faces. The relevance of this encoding task (i.e. judging whether the persons were critical or accepting) can be seen in the fact that in another study (Lundh and Öst, 1996a), where Ss were shown the same photos of faces but with another encoding task, i.e. rating the quality of contact that the Ss expected with these persons if they were to meet them in real life, social phobics did not differ from the control group on the recognition task. That is, the social phobics showed no evidence of a recognition bias with respect to high-contact vs low-contact faces. The demonstration of a bias for critical faces in social phobia is consistent with the fact that the basic fear in social phobia is about being negatively evaluated by others. If this fear is associated with an increased vigilance for facial expressions of critique and negative evaluation, this might be expected to lead to a more elaborated encoding of faces which are perceived as expressing critical attitudes, and therefore to better recognition for such faces. Two questions that remained unanswered after the above-mentioned studies of face recognition bias, however, were: (1) Is the effect that was found on critical vs accepting faces specific to social phobia, or can a similar bias also be found in other anxiety disorders? (2) Is the demonstrated effect really a matter of recognition bias, or is it due to response bias? It is possible that social phobics may have a response bias for critical vs accepting faces, in the sense that they will report the recognition of more critical than accepting faces, independently of whether they have actually seen these faces or not. Unfortunately, the design used by Lundh and Öst (1996b) did not allow a decision in favour of one or the other of these two explanations, since the distractor faces on the recognition task were never rated on the critical-accepting dimension. The first purpose of the present paper was to replicate the two above-mentioned face recognition experiments with another patient group, i.e. patients with a diagnosis of panic disorder with agoraphobia. Since the typical fear of a panic patient with agoraphobia is not about being negatively evaluated by others, no bias for critical faces was expected. The second purpose was to investigate whether panic patients with agoraphobia have another kind of recognition bias, i.e. a bias for faces perceived as ‘safe’. In fact, the fear of panic patients with agoraphobia by definition involves an interpersonal dimension, since the DSM-IV criteria for agoraphobia (American Psychiatric Association, 1994) specify that these patients fear being in places or situations where help may not be available in the event of having a panic attack or panic-like symptoms. That is, other people seem to play an important role also in panic disorder with agoraphobia, although not as being an object of fear, but as part of the patient’s striving for safety in the face of possible panic attacks. In other words, it is a basic concern of agoraphobics that they should have safe persons around, whom they can trust for help if they should suffer a panic attack. To the extent that this produces a heightened attention to signs of whether other people are safe persons or not, this might be expected to lead to a more elaborated encoding of faces which are perceived as safe, and therefore to better recognition for such faces.