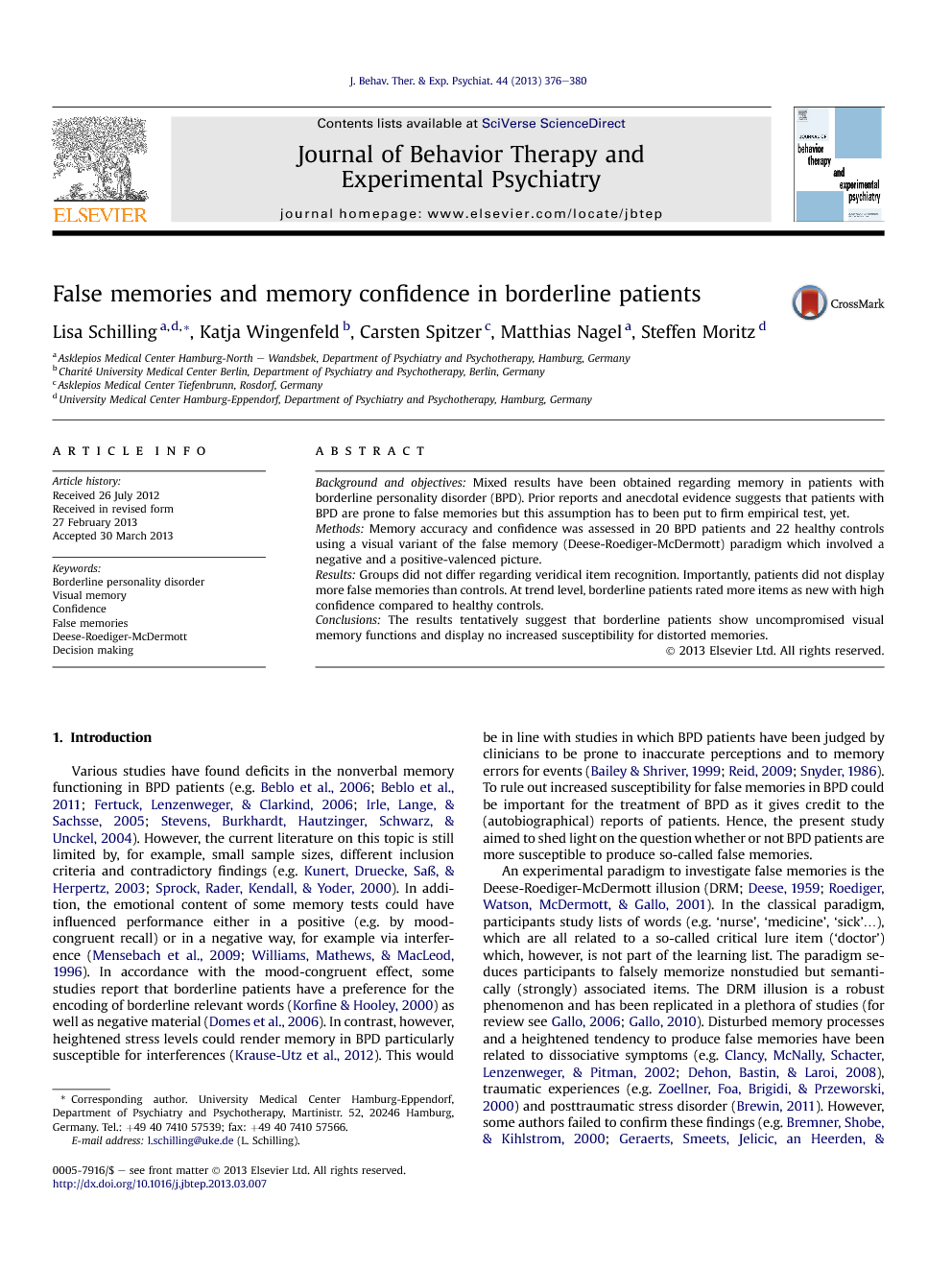 Background and objectives Mixed results have been obtained regarding memory in patients with borderline personality disorder (BPD). Prior reports and anecdotal evidence suggests that patients with BPD are prone to false memories but this assumption has to been put to firm empirical test, yet. Methods Memory accuracy and confidence was assessed in 20 BPD patients and 22 healthy controls using a visual variant of the false memory (Deese-Roediger-McDermott) paradigm which involved a negative and a positive-valenced picture. Results Groups did not differ regarding veridical item recognition. Importantly, patients did not display more false memories than controls. At trend level, borderline patients rated more items as new with high confidence compared to healthy controls. Conclusions The results tentatively suggest that borderline patients show uncompromised visual memory functions and display no increased susceptibility for distorted memories.

Various studies have found deficits in the nonverbal memory functioning in BPD patients (e.g. Beblo et al., 2006; Beblo et al., 2011; Fertuck, Lenzenweger, & Clarkind, 2006; Irle, Lange, & Sachsse, 2005; Stevens, Burkhardt, Hautzinger, Schwarz, & Unckel, 2004). However, the current literature on this topic is still limited by, for example, small sample sizes, different inclusion criteria and contradictory findings (e.g. Kunert, Druecke, Saß, & Herpertz, 2003; Sprock, Rader, Kendall, & Yoder, 2000). In addition, the emotional content of some memory tests could have influenced performance either in a positive (e.g. by mood-congruent recall) or in a negative way, for example via interference (Mensebach et al., 2009; Williams, Mathews, & MacLeod, 1996). In accordance with the mood-congruent effect, some studies report that borderline patients have a preference for the encoding of borderline relevant words (Korfine & Hooley, 2000) as well as negative material (Domes et al., 2006). In contrast, however, heightened stress levels could render memory in BPD particularly susceptible for interferences (Krause-Utz et al., 2012). This would be in line with studies in which BPD patients have been judged by clinicians to be prone to inaccurate perceptions and to memory errors for events (Bailey & Shriver, 1999; Reid, 2009; Snyder, 1986). To rule out increased susceptibility for false memories in BPD could be important for the treatment of BPD as it gives credit to the (autobiographical) reports of patients. Hence, the present study aimed to shed light on the question whether or not BPD patients are more susceptible to produce so-called false memories. An experimental paradigm to investigate false memories is the Deese-Roediger-McDermott illusion (DRM; Deese, 1959; Roediger, Watson, McDermott, & Gallo, 2001). In the classical paradigm, participants study lists of words (e.g. ‘nurse’, ‘medicine’, ‘sick’…), which are all related to a so-called critical lure item (‘doctor’) which, however, is not part of the learning list. The paradigm seduces participants to falsely memorize nonstudied but semantically (strongly) associated items. The DRM illusion is a robust phenomenon and has been replicated in a plethora of studies (for review see Gallo, 2006; Gallo, 2010). Disturbed memory processes and a heightened tendency to produce false memories have been related to dissociative symptoms (e.g. Clancy, McNally, Schacter, Lenzenweger, & Pitman, 2002; Dehon, Bastin, & Laroi, 2008), traumatic experiences (e.g. Zoellner, Foa, Brigidi, & Przeworski, 2000) and posttraumatic stress disorder (Brewin, 2011). However, some authors failed to confirm these findings (e.g. Bremner, Shobe, & Kihlstrom, 2000; Geraerts, Smeets, Jelicic, an Heerden, & Merckelbach, 2005; Jelinek, Hottenrott, Randjbar, Peters, & Moritz, 2009; Wright, Startup, & Mathews, 2005). No study has yet experimentally explored visual false memories in borderline patients using the DRM paradigm. Several (indirect) arguments hint to the possibility that BPD patients show heightened susceptibility to the DRM effect. For example, many borderline patients have experienced (childhood) trauma (Laporte, Paris, Guttman, & Russell, 2011) and PTSD (Pagura et al., 2010). In addition, up to 75% of BPD patients suffer from dissociative experiences (for a review see Barnow et al., 2010). As mentioned before, these (comorbid) symptoms seem to be associated with increased false memories and could impede the encoding and retrieval of objective events (Bailey & Shriver, 1999). Hence, we expected that patients diagnosed with BPD show worse visual memory performance and, in particular, a heightened susceptibility for false memories on the DRM paradigm compared to healthy controls. Further, we anticipated that the number of false memories is related to the severity of dissociative symptoms. In addition, we controlled for depressive symptoms which are very common in BPD (Lenzenweger, Lane, Loranger, & Kessler, 2007; Zanarini et al., 1998) and have been found to impair memory performance in other populations (e.g. Moritz, Kloss, Jahn, Schick, & Hand, 2003). To test these hypotheses, we assessed a visual version of the DRM paradigm. In addition, the emotional content of the learning material was manipulated. We expected that patients would show enhanced encoding of negatively valenced emotional material relative to positive material (mood- or schema-congruent effect). Finally, we wanted to explore whether the subjective evaluation of the own performance differs from the measured performance accuracy. Memory confidence was explored in view of a prior finding that patients with BPD showed overconfidence in an emotion recognition task (Schilling et al., 2012). We expected that overconfidence represents a general cognitive bias in BPD. A heightened memory confidence might contribute to conflicts as the subject does not question his or her judgement as would be the case with responses attached with doubt.