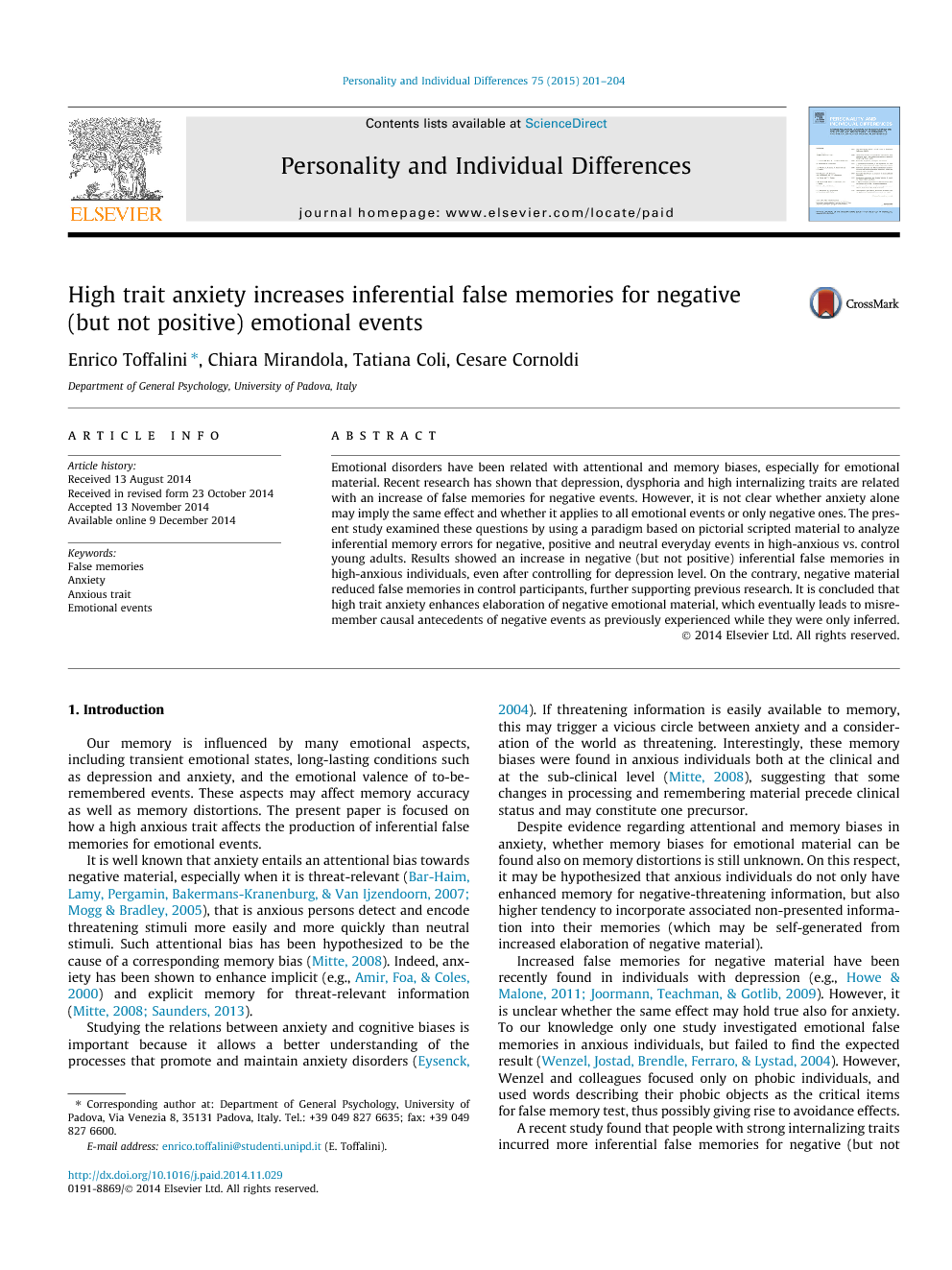 Emotional disorders have been related with attentional and memory biases, especially for emotional material. Recent research has shown that depression, dysphoria and high internalizing traits are related with an increase of false memories for negative events. However, it is not clear whether anxiety alone may imply the same effect and whether it applies to all emotional events or only negative ones. The present study examined these questions by using a paradigm based on pictorial scripted material to analyze inferential memory errors for negative, positive and neutral everyday events in high-anxious vs. control young adults. Results showed an increase in negative (but not positive) inferential false memories in high-anxious individuals, even after controlling for depression level. On the contrary, negative material reduced false memories in control participants, further supporting previous research. It is concluded that high trait anxiety enhances elaboration of negative emotional material, which eventually leads to misremember causal antecedents of negative events as previously experienced while they were only inferred.

Our memory is influenced by many emotional aspects, including transient emotional states, long-lasting conditions such as depression and anxiety, and the emotional valence of to-be-remembered events. These aspects may affect memory accuracy as well as memory distortions. The present paper is focused on how a high anxious trait affects the production of inferential false memories for emotional events. It is well known that anxiety entails an attentional bias towards negative material, especially when it is threat-relevant (Bar-Haim et al., 2007 and Roediger and McDermott, 1995), that is anxious persons detect and encode threatening stimuli more easily and more quickly than neutral stimuli. Such attentional bias has been hypothesized to be the cause of a corresponding memory bias (Mitte, 2008). Indeed, anxiety has been shown to enhance implicit (e.g., Amir, Foa, & Coles, 2000) and explicit memory for threat-relevant information (Mogg and Bradley, 2005 and Saunders, 2013). Studying the relations between anxiety and cognitive biases is important because it allows a better understanding of the processes that promote and maintain anxiety disorders (Eysenck, 2004). If threatening information is easily available to memory, this may trigger a vicious circle between anxiety and a consideration of the world as threatening. Interestingly, these memory biases were found in anxious individuals both at the clinical and at the sub-clinical level (Mitte, 2008), suggesting that some changes in processing and remembering material precede clinical status and may constitute one precursor. Despite evidence regarding attentional and memory biases in anxiety, whether memory biases for emotional material can be found also on memory distortions is still unknown. On this respect, it may be hypothesized that anxious individuals do not only have enhanced memory for negative-threatening information, but also higher tendency to incorporate associated non-presented information into their memories (which may be self-generated from increased elaboration of negative material). Increased false memories for negative material have been recently found in individuals with depression (e.g., Howe and Malone, 2011 and Joormann et al., 2009). However, it is unclear whether the same effect may hold true also for anxiety. To our knowledge only one study investigated emotional false memories in anxious individuals, but failed to find the expected result (Wenzel, Jostad, Brendle, Ferraro, & Lystad, 2004). However, Wenzel and colleagues focused only on phobic individuals, and used words describing their phobic objects as the critical items for false memory test, thus possibly giving rise to avoidance effects. A recent study found that people with strong internalizing traits incurred more inferential false memories for negative (but not neutral) events, compared to controls (Toffalini, Mirandola, Drabik, Melinder, & Cornoldi, 2014). However, that study had some limitations. First, there was no positive content in the to-be-remembered material, making it difficult to know whether the effect of the internalizing traits was specific to negative or could apply to all emotional material. Second, as in other studies on this issue (e.g., Joormann et al., 2009) no distinction was made between the depressive and anxious traits. This was due to the naturally high co-occurrence of depression and anxiety, which is well documented in both clinical (Mineka, Watson, & Clark, 1998) and sub-clinical samples (Mitte, 2008). The present study investigated the occurrence of false memories associated with emotional (positive and negative with high arousal) vs. neutral events in a sample of young adults with high anxious trait (but not high depressive trait) compared to a control sample. For this purpose, we used an adapted version of a paradigm (Mirandola, Toffalini, Grassano, Cornoldi, & Melinder, 2014) based on the presentation of pictorial scripted material that allows for the investigation of inference based memory errors: gap-filling and causal errors (see Hannigan & Reinitz, 2001). Gap-filling errors do not imply a subjective re-interpretation of the event as they represent the likelihood of accepting non presented – but consistent with the script – information. For example, in a script of a girl competing in a running race, falsely recognizing the scene of the girl tying her shoe laces, while the scene of the girl doing stretching was actually presented. On the contrary, causal errors occur when participants incorporate the not presented antecedent of a viewed action outcome into their memory; for example falsely recognizing the scene of the girl springing from the starting grid (i.e., the antecedent) while only the scene of the girl exultant after winning the competition (i.e., the outcome) was actually presented. Furthermore, emotionality of material varied by presenting different outcomes (i.e., negative or neutral) at the end of each pictorial script. In the present version of the paradigm we included also positive material. We made a series of predictions. First, if participants with high trait anxiety elaborated negative events more deeply and included in their extended memory representation also related negative elements, they would produce a higher number of inferential false memories associated with negative events compared to non-anxious participants. Second, the effect was expected to be more evident for the ‘causal’ errors than for gap-filling errors. Indeed, causal errors are false memories of events that are directly and logically related to the emotionally charged outcomes, and thus they are expected to be more sensitive to valence manipulations (Toffalini et al., 2014). On the contrary, gap-filling errors are false memories for secondary events that make up the rest of the episode, but that are more peripheral with regard to the emotional outcome. We also predicted that either no effect, or even the opposite effect, would be found for emotionally positive material, as anxiety entails different processing for negative/threatening material, and not for all emotional material.