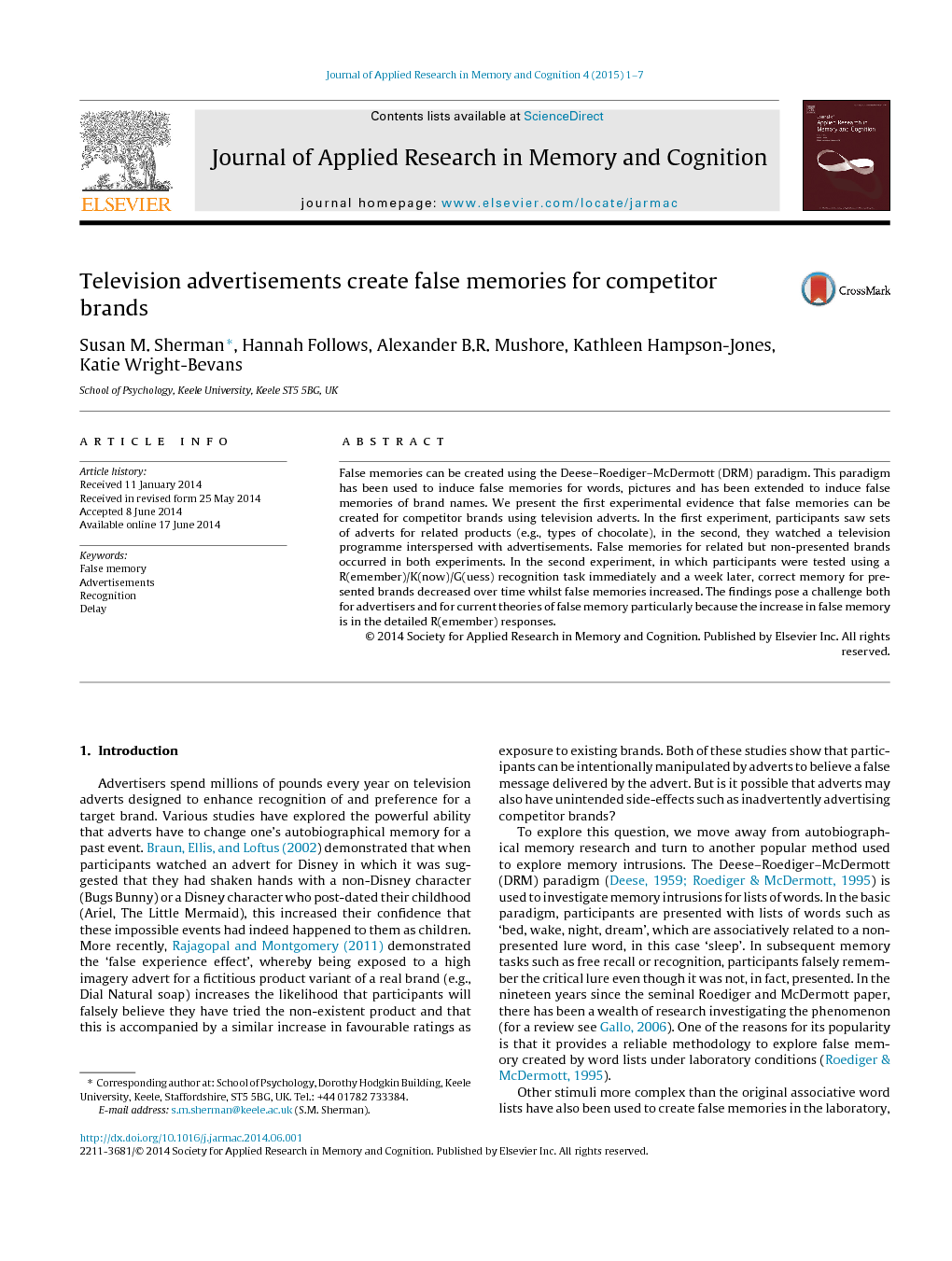 False memories can be created using the Deese–Roediger–McDermott (DRM) paradigm. This paradigm has been used to induce false memories for words, pictures and has been extended to induce false memories of brand names. We present the first experimental evidence that false memories can be created for competitor brands using television adverts. In the first experiment, participants saw sets of adverts for related products (e.g., types of chocolate), in the second, they watched a television programme interspersed with advertisements. False memories for related but non-presented brands occurred in both experiments. In the second experiment, in which participants were tested using a R(emember)/K(now)/G(uess) recognition task immediately and a week later, correct memory for presented brands decreased over time whilst false memories increased. The findings pose a challenge both for advertisers and for current theories of false memory particularly because the increase in false memory is in the detailed R(emember) responses.

Advertisers spend millions of pounds every year on television adverts designed to enhance recognition of and preference for a target brand. Various studies have explored the powerful ability that adverts have to change one's autobiographical memory for a past event. Braun, Ellis, and Loftus (2002) demonstrated that when participants watched an advert for Disney in which it was suggested that they had shaken hands with a non-Disney character (Bugs Bunny) or a Disney character who post-dated their childhood (Ariel, The Little Mermaid), this increased their confidence that these impossible events had indeed happened to them as children. More recently, Rajagopal and Montgomery (2011) demonstrated the ‘false experience effect’, whereby being exposed to a high imagery advert for a fictitious product variant of a real brand (e.g., Dial Natural soap) increases the likelihood that participants will falsely believe they have tried the non-existent product and that this is accompanied by a similar increase in favourable ratings as exposure to existing brands. Both of these studies show that participants can be intentionally manipulated by adverts to believe a false message delivered by the advert. But is it possible that adverts may also have unintended side-effects such as inadvertently advertising competitor brands? To explore this question, we move away from autobiographical memory research and turn to another popular method used to explore memory intrusions. The Deese–Roediger–McDermott (DRM) paradigm (Deese, 1959 and Roediger and McDermott, 1995) is used to investigate memory intrusions for lists of words. In the basic paradigm, participants are presented with lists of words such as ‘bed, wake, night, dream’, which are associatively related to a non-presented lure word, in this case ‘sleep’. In subsequent memory tasks such as free recall or recognition, participants falsely remember the critical lure even though it was not, in fact, presented. In the nineteen years since the seminal Roediger and McDermott paper, there has been a wealth of research investigating the phenomenon (for a review see Gallo, 2006). One of the reasons for its popularity is that it provides a reliable methodology to explore false memory created by word lists under laboratory conditions (Roediger & McDermott, 1995). Other stimuli more complex than the original associative word lists have also been used to create false memories in the laboratory, such as associated pictures (Israel & Schacter, 1997), categorised pictures (Seamon, Luo, Schlegel, Greene, & Goldenberg, 2000), emotional stimuli (Howe, Candel, Otgaar, Malone, & Wimmer, 2010), popular songs (Sherman & Kennerley, 2013) and, most relevant to the current study, brand names (Sherman, 2013 and Sherman and Moran, 2011). Sherman and Moran (2011) presented participants with lists of related brand names (e.g., Morrisons, Sainsbury's, Asda, Waitrose). They then asked participants to complete a mathematical task or free recall task and finally, all participants completed a recognition task. List items were correctly recalled 36% of the time, whilst non-presented lure items (e.g., Tesco) were falsely recalled 5% of the time. For recognition memory, participants correctly recalled list items 81% of the time and falsely recognised the non-presented lures 45% of the time. There are several theoretical explanations for the creation of false memories using the DRM paradigm. Because we are predominantly interested in using the paradigm to explore false memory creation for non-presented adverts, we will briefly outline just two of the major theories, the activation/monitoring account (e.g., Roediger and McDermott, 1995 and Roediger et al., 2001) and fuzzy trace theory (e.g., Reyna & Brainerd, 1995). According to the activation/monitoring account, activation spreads from studied items, (e.g., HSBC, Lloyds TSB, etc.) to related items in a semantic network (e.g., Natwest) (Collins & Loftus, 1975). The activation of related but non-presented items at study contributes to source monitoring difficulties which lead participants to falsely remember them at test. The second account, fuzzy trace theory, posits that we create two parallel memory traces at encoding, a verbatim representation of the perceptual details of each of the items being remembered and a gist trace which represents the overall theme or conceptual relationship shared by the encoded items. According to this account, the verbatim traces are responsible for correct memories whilst the gist representation underlies false memories. There are increasing numbers of advertisements shown on television and the effects of this ‘clutter’, both competitive and non-competitive, have been investigated (e.g., Ha and Litman, 1997, Kent and Allen, 1993 and Pieters et al., 2002). Whilst these studies have found that both types of clutter reduce the effectiveness of adverts by reducing memory for the brands being advertised, no studies have yet been conducted to explore whether competitive clutter increases false recognition or recall of competitor brands. The DRM paradigm provides us with an ideal framework with which to explore the impact of seeing multiple related advertisements. Accordingly, in experiment 1, we present participants with sets of adverts related to specific brand categories (e.g., adverts for beers). We then test their recall and/or recognition memory for the brands presented. Although Sherman and Moran (2011) found false memory for brand names, we might expect that adverts would provide sufficient additional information and imagery so that viewers were better able to discriminate between adverts they had and had not seen. Previous research investigating effects of modality in the DRM paradigm (e.g., Smith & Hunt, 1998) have found lower levels of false memory following visual presentation of word lists relative to auditory presentation, whilst research using static pictures to induce false memories (e.g., Israel & Schacter, 1997) found lower levels of false recognition using pictures relative to words. We were keen to explore the effect of visual – only presentation of the adverts (analogous to watching television with the sound muted) with visual and auditory presentation (analogous to watching television with the sound on). In order to explore this we showed half our participants the adverts with the sound on and the other half with the sound turned off.