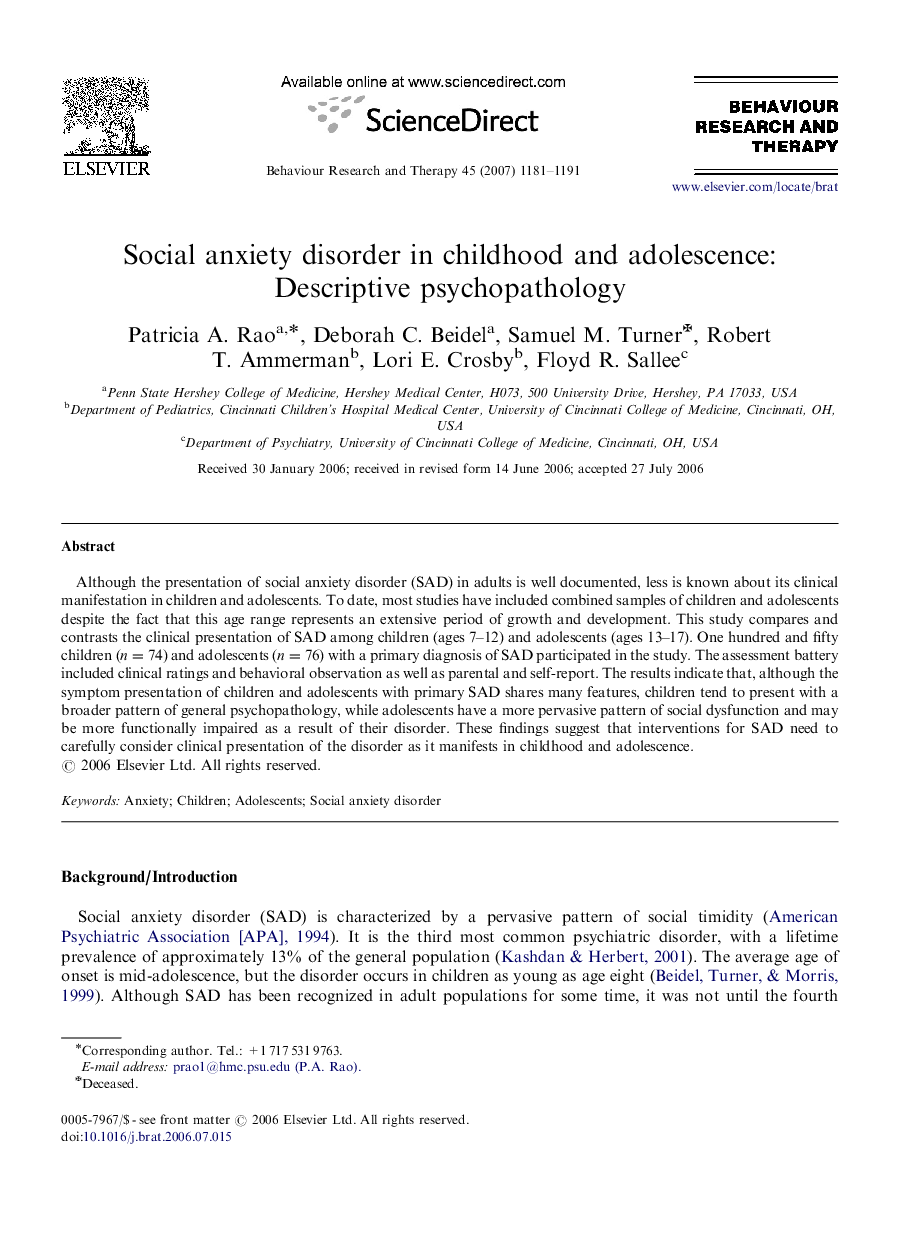 Social anxiety disorder (SAD) is characterized by a pervasive pattern of social timidity (American Psychiatric Association [APA], 1994). It is the third most common psychiatric disorder, with a lifetime prevalence of approximately 13% of the general population (Kashdan & Herbert, 2001). The average age of onset is mid-adolescence, but the disorder occurs in children as young as age eight (Beidel, Turner, & Morris, 1999). Although SAD has been recognized in adult populations for some time, it was not until the fourth edition of the Diagnostic and Statistical Manual of Mental Disorders (DSM-IV; APA, 1994) that the disorder was formally recognized in children (Beidel & Turner, 1998). Over the past several decades, considerable research has examined the psychopathology of SAD in adults (e.g., Beidel, Turner, & Dancu, 1985; Heimberg, Holt, Schneier, Spitzer, & Liebowitz, 1993; Turner, Beidel, Dancu, & Keyes, 1986), but to a much lesser extent in adolescents (e.g., Beidel, Turner, Young et al., in press; Essau, Conradt, & Petermann, 1999), and children (Beidel, 1991; Beidel et al., 1999; Spence, Donovan, & Brechman-Toussaint, 1999). The outcome of these investigations has clearly documented that those with SAD differ from normal control subjects on measures of emotional, occupational, academic and social functioning. One limitation of the extant data is that with very few exceptions (e.g., Beidel, 1991; Beidel et al., 1999), the majority of studies of childhood psychopathology included combined samples of children and adolescents (e.g., Arnold et al., 2003; Spence et al., 1999), which is problematic because this age range represents an extensive and evolving period of human development. Characterized by rapid physical, cognitive, and emotional maturation, it is likely that symptom presentation may vary by age group. Thus, data based on pre-adolescent samples may not be relevant for an adolescent population and vice versa. In support of this hypothesis, age group differences have been documented in other anxiety disorders. For example, among samples of children with generalized anxiety disorder/overanxious disorder (GAD/OAD), older children report more symptoms of the disorder than younger children (Strauss, Lease, Last, & Francis, 1988; Tracey, Chorpita, & Douban, 1997). The different symptom presentation suggests that without the knowledge of differences and attention to age-related symptom variation, GAD might go undetected in younger children. As noted, the few studies of the psychopathology of childhood SAD have focused on children and very young adolescents (Beidel et al., 1999; Spence et al., 1999) and have not compared younger versus older groups. In the only study of which we are aware that compares potential group differences in clinical presentation (Alfano, Beidel, & Turner, 2006), the presence of negative cognitions during social interaction tasks were reported by adolescents, but not children, with SAD. Thus, with respect to the psychopathology of SAD in youth, many questions remain unanswered. For example, are children and adolescents with SAD equally impaired by the disorder? Do comorbid conditions exist in both groups, are they the same disorders and do they exist at equal frequency? Given their greater physical and cognitive maturity, are adolescents more likely to avoid social situations? Thus, despite the obvious need, there has been only minimal attention to potential group variations. Knowledge of differences in clinical presentation is important for developing interventions and evaluating treatment outcome as well. For example, the paucity of negative cognitions among children and adolescents observed by Alfano et al. (2006) may help to explain the observation by Spence and colleagues (Spence, Donovan, & Brechman-Toussaint, 2000) that a subset of children participating in a cognitive-behavioral treatment program were unable to participate in its cognitive-restructuring component. To summarize, although the extant literature suggests that SAD can be identified in both children and adolescents (e.g., Beidel & Turner, 1998), it remains unclear whether the disorder presents differently in younger versus older youth. Identifying potential age differences in clinical presentation is not simply an academic exercise. Such information is important in order to accurately identify and treat those who suffer from SAD. Identification of potentially age-specific differences in clinical presentation could allow for the early initiation of treatment and thereby possibly avoid the resultant functional impairment (Alnaes & Torgersen, 1999; Davidson, Hughes, & George, 1993; Keller, 2003). Furthermore, elucidating its expression in different groups could allow for the development of more targeted and therefore, efficacious treatment strategies. The purpose of this investigation was to compare and contrast the clinical presentation of SAD among children and adolescents. Data were compared across a range of variables including diagnostic interviews, self and parental report and behavioral assessment. It was expected that although both groups would equally manifest the core features of SAD, group differences might emerge in secondary clinical features.