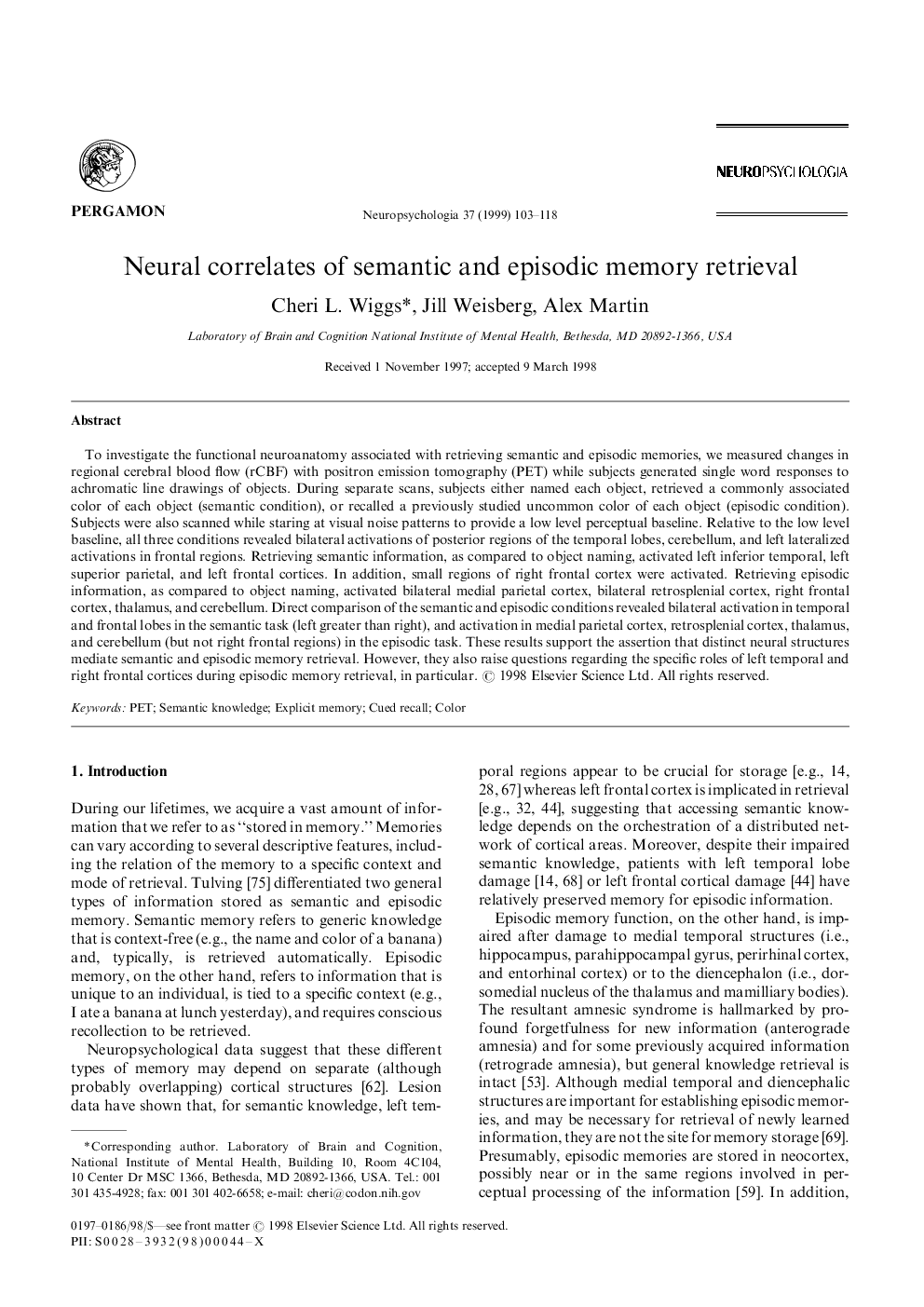 During our lifetimes, we acquire a vast amount of information that we refer to as stored in memory. Memories can vary according to several descriptive features, including the relation of the memory to a specific context and mode of retrieval. Tulving [75]differentiated two general types of information stored as semantic and episodic memory. Semantic memory refers to generic knowledge that is context-free (e.g., the name and color of a banana) and, typically, is retrieved automatically. Episodic memory, on the other hand, refers to information that is unique to an individual, is tied to a specific context (e.g., I ate a banana at lunch yesterday), and requires conscious recollection to be retrieved. Neuropsychological data suggest that these different types of memory may depend on separate (although probably overlapping) cortical structures [62]. Lesion data have shown that, for semantic knowledge, left temporal regions appear to be crucial for storage 14, 28 and 67whereas left frontal cortex is implicated in retrieval 32 and 44, suggesting that accessing semantic knowledge depends on the orchestration of a distributed network of cortical areas. Moreover, despite their impaired semantic knowledge, patients with left temporal lobe damage 14 and 68or left frontal cortical damage [44]have relatively preserved memory for episodic information. Episodic memory function, on the other hand, is impaired after damage to medial temporal structures (i.e., hippocampus, parahippocampal gyrus, perirhinal cortex, and entorhinal cortex) or to the diencephalon (i.e., dorsomedial nucleus of the thalamus and mamilliary bodies). The resultant amnesic syndrome is hallmarked by profound forgetfulness for new information (anterograde amnesia) and for some previously acquired information (retrograde amnesia), but general knowledge retrieval is intact [53]. Although medial temporal and diencephalic structures are important for establishing episodic memories, and may be necessary for retrieval of newly learned information, they are not the site for memory storage [69]. Presumably, episodic memories are stored in neocortex, possibly near or in the same regions involved in perceptual processing of the information [59]. In addition, neuropsychological evidence suggests that damage to frontal cortex (left or right) can impair specific aspects of episodic mnemonic performance, such as memory search processes and organizational strategies (for reviews, see 65 and 82). In general, functional imaging studies using positron emission tomography (PET) and functional magnetic resonance imaging (fMRI) with normal individuals support and extend these neuropsychological findings. As would be predicted by lesion data, subjects performing semantic retrieval tasks show increased regional cerebral blood flow (rCBF), or activations, in left inferior and dorsolateral frontal cortex and left posterior temporal cortex 13, 40, 41 and 48. Moreover, activation in medial temporal structures has been reported during encoding 29, 42 and 72and episodic retrieval 24, 52 and 60. However, despite the proposal that episodic memories are stored in neocortex, near or in the same regions involved in perceptual processing, surprisingly few functional imaging studies report such activations (although see 47 and 61for exceptions). Instead, the most frequently reported area of activation is in the medial parietal region (i.e., precuneus) 8, 16, 26, 33, 64 and 77. Consistent with lesion data, retrieving episodic information activates frontal cortex, but with the surprising caveat that right frontal regions are reliably activated more than the left (see 9 and 50for reviews).It has also been found that the left frontal cortex is differentially more activated during encoding. These general trends in functional imaging data of frontal cortex have lead Tulving and colleagues to propose the Hemispheric Encoding⧹Retrieval Asymmetry (HERA) model [76]. Interpreting functional imaging data for semantic and episodic tasks is difficult, however, as there are often differences between semantic and episodic tasks besides the nature of the memories. These differences could affect retrieval strategies used by subjects. For instance, Fletcher et al. [16]reported that subjects performed perfectly (100%) in their semantic task, but less accurately (81%) in the episodic task. Different levels of performance can confound the interpretation of differences in brain activity (see [51]). Also, the semantic tasks often used have multiple potentially correct answers (e.g., stem completion asks the subject to complete a three letter stem with the first word that comes to mind) whereas episodic tests have only one correct answer, so search strategies for semantic tests are typically less constrained than for episodic tests (i.e., open ended search vs restricted search). Although previous PET studies have included semantic and episodic tasks in the same experiment, typically the semantic task is included as a reference, or control, task for the episodic task 7, 16, 64 and 71. The present study, on the other hand, was designed to equate the semantic and episodic tasks as much as possible. We trained subjects to a high criterion performance on the episodic task so that accuracy levels were matched to those on the semantic and episodic tasks. In both tasks, subjects were asked to retrieve color names for achromatic line drawings. Thus, the stimuli (achromatic line drawings of objects) and responses (names of colors) for both tasks were identical. However, in one condition, color names were retrieved from semantic memory; i.e., general knowledge of an items typical color (e.g., yellow banana, white igloo). In another condition, color names were retrieved from episodic memory; i.e., specific knowledge from a previous study episode in which the items were visually presented in an uncommon color (e.g., red snowman, green lips). We chose to study semantic and episodic memory of color for the following reasons: First, within a particular modality (e.g., vision), the particular attribute retrieved may affect what areas of the brain are activated [40]. By constraining the particular attribute to be retrieved, we controlled for variation that could be due to processes other than those directly related to memory retrieval. Second, because we have evidence for the neural correlates of semantic memory for color [40]the current study was an opportunity to replicate and expand those findings.