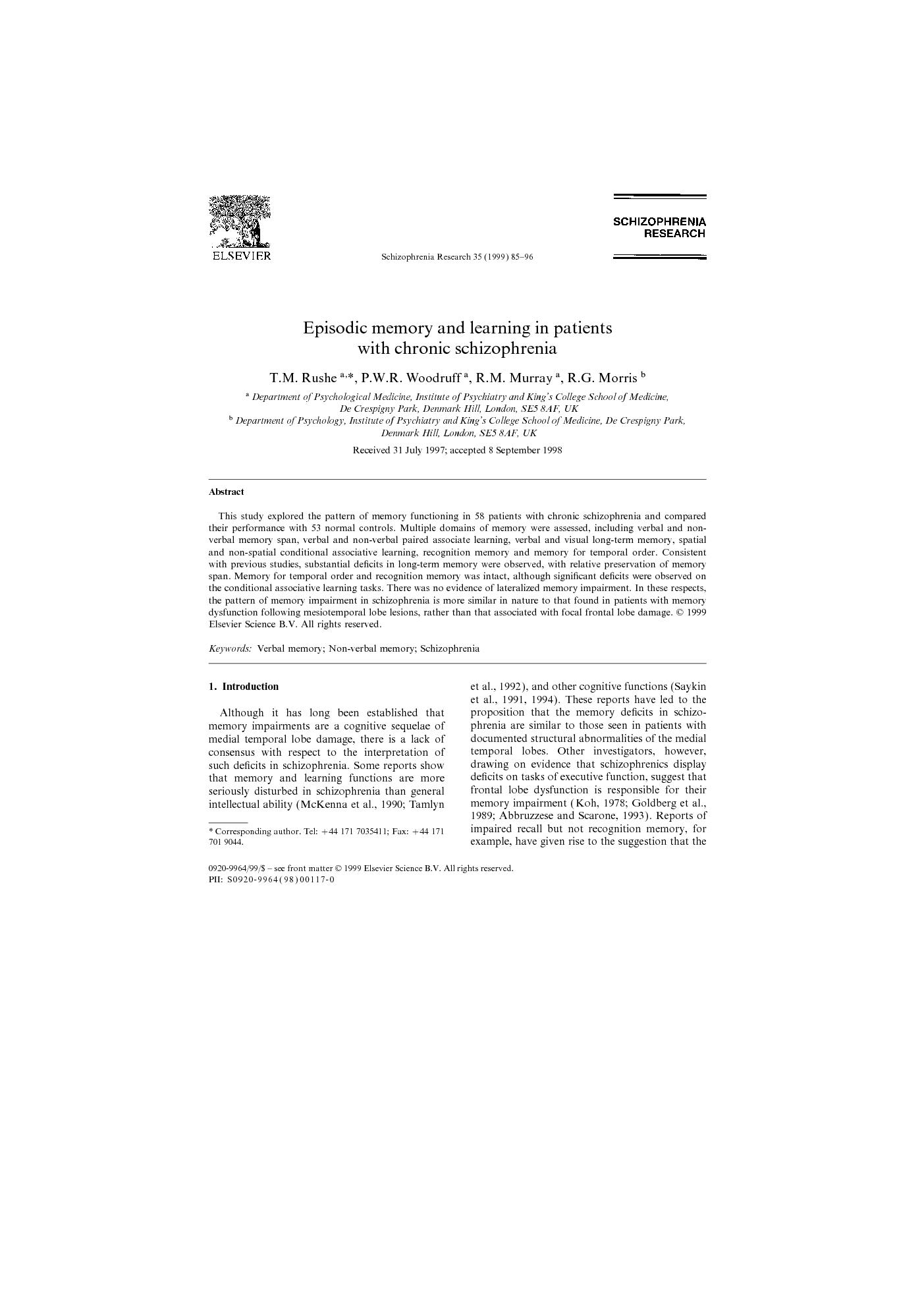 This study explored the pattern of memory functioning in 58 patients with chronic schizophrenia and compared their performance with 53 normal controls. Multiple domains of memory were assessed, including verbal and non-verbal memory span, verbal and non-verbal paired associate learning, verbal and visual long-term memory, spatial and non-spatial conditional associative learning, recognition memory and memory for temporal order. Consistent with previous studies, substantial deficits in long-term memory were observed, with relative preservation of memory span. Memory for temporal order and recognition memory was intact, although significant deficits were observed on the conditional associative learning tasks. There was no evidence of lateralized memory impairment. In these respects, the pattern of memory impairment in schizophrenia is more similar in nature to that found in patients with memory dysfunction following mesiotemporal lobe lesions, rather than that associated with focal frontal lobe damage.

Although it has long been established that memory impairments are a cognitive sequelae of medial temporal lobe damage, there is a lack of consensus with respect to the interpretation of such deficits in schizophrenia. Some reports show that memory and learning functions are more seriously disturbed in schizophrenia than general intellectual ability (McKenna et al., 1990; Tamlyn et al., 1992), and other cognitive functions (Saykin et al., 1991 and Saykin et al., 1994). These reports have led to the proposition that the memory deficits in schizophrenia are similar to those seen in patients with documented structural abnormalities of the medial temporal lobes. Other investigators, however, drawing on evidence that schizophrenics display deficits on tasks of executive function, suggest that frontal lobe dysfunction is responsible for their memory impairment (Koh, 1978; Goldberg et al., 1989; Abbruzzese and Scarone, 1993). Reports of impaired recall but not recognition memory, for example, have given rise to the suggestion that the memory deficits occur because of an inability to effectively organize acquired material for retrieval (Koh, 1978; Goldberg et al., 1989). Thus, Goldberg et al. (1989)concluded that memory impairments in schizophrenia are `reminiscent of the memory disorder seen in patients with dysfunction of prefrontally linked neural systems'. It is now appreciated that memory is not a unitary process, but composed of multiple separate systems (Squire and Zola-Morgan, 1991). In order to readdress the significance of memory deficits in schizophrenia, we adopted the approach of traditional neuropsychology, by assessing the schizophrenic patients on various memory tests that have been shown to be differentially affected by the presence of damage to the frontal lobes, the mesiotemporal lobes, or the diencephalon. Damage to the medial temporal lobe typically impairs episodic memory functioning, or new learning ability. Within this area of function, however, memory span remains intact and some patients have been found to have preserved general intellectual ability in the context of severely impaired memory (Squire, 1987; Shimamura et al., 1991; Squire and Zola-Morgan, 1991). Also, with temporal lobe damage, memory deficits are often, though not always (e.g. Gold et al., 1992; Barr, 1997) found to be material specific, depending on which lobe is involved. With right temporal lobe damage, memory and learning for verbal material remain intact, whereas memory for material that does not lend itself easily to verbal encoding is compromised (Delaney et al., 1980; Goldstein et al., 1988; Morris et al., 1995a). The reverse pattern has been observed in patients with damage restricted to the left hemisphere (Delaney et al., 1980; Goldstein et al., 1988; Morris et al., 1995a). Frontal lobe damage affects the `prospective' (Shimamura et al., 1991) or `executive' (Baddeley, 1986) memory system. Prospective memory differs from the kind of memory that is dependent on the integrity of the medial temporal lobes in that the former is needed to manipulate and organize memory, whereas the latter is needed to store and consolidate new memories (Shimamura et al., 1991). Impairments in memory for temporal order, conditional associative learning, and memory span have all been reported after frontal lobe damage (Milner and Petrides, 1984; Petrides, 1985; Schacter, 1987; Shimamura et al., 1991). That a deficit in prospective memory does not necessarily imply a deficit in new learning ability and vice versa is evident from the pattern of dissociations found in a number of studies. For example, the well-known amnesic patient HM was unimpaired in memory for a temporal order task (Sagar et al., 1990), and in contrast to patients with unilateral right and left temporal lobe epilepsy, patients with frontal lobe damage are unimpaired on tests of verbal and non-verbal tests of new learning (Delaney et al., 1980; Shimamura et al., 1991). Memory span, long-term memory, paired associate learning, memory for temporal order, recognition memory and conditional associative learning were the memory functions assessed in this study. In addition, to address the question of modality specific dysfunction, the memory functions were assessed using both verbal and non-verbal or visuospatial material. For ease of reference to the presumed anatomy of each of the memory tasks used, the key neuropsychological findings are presented in Table 1. Finally, the study provides a profile of memory functioning for the schizophrenic group by transforming their memory test scores to standard equivalents, using the mean and standard deviation of the control group's performance on each task. This conversion allows the plotting of patterns of performance across various tests that have widely differing raw score metrics, and enables us to express performance in terms of a deviation from normal.