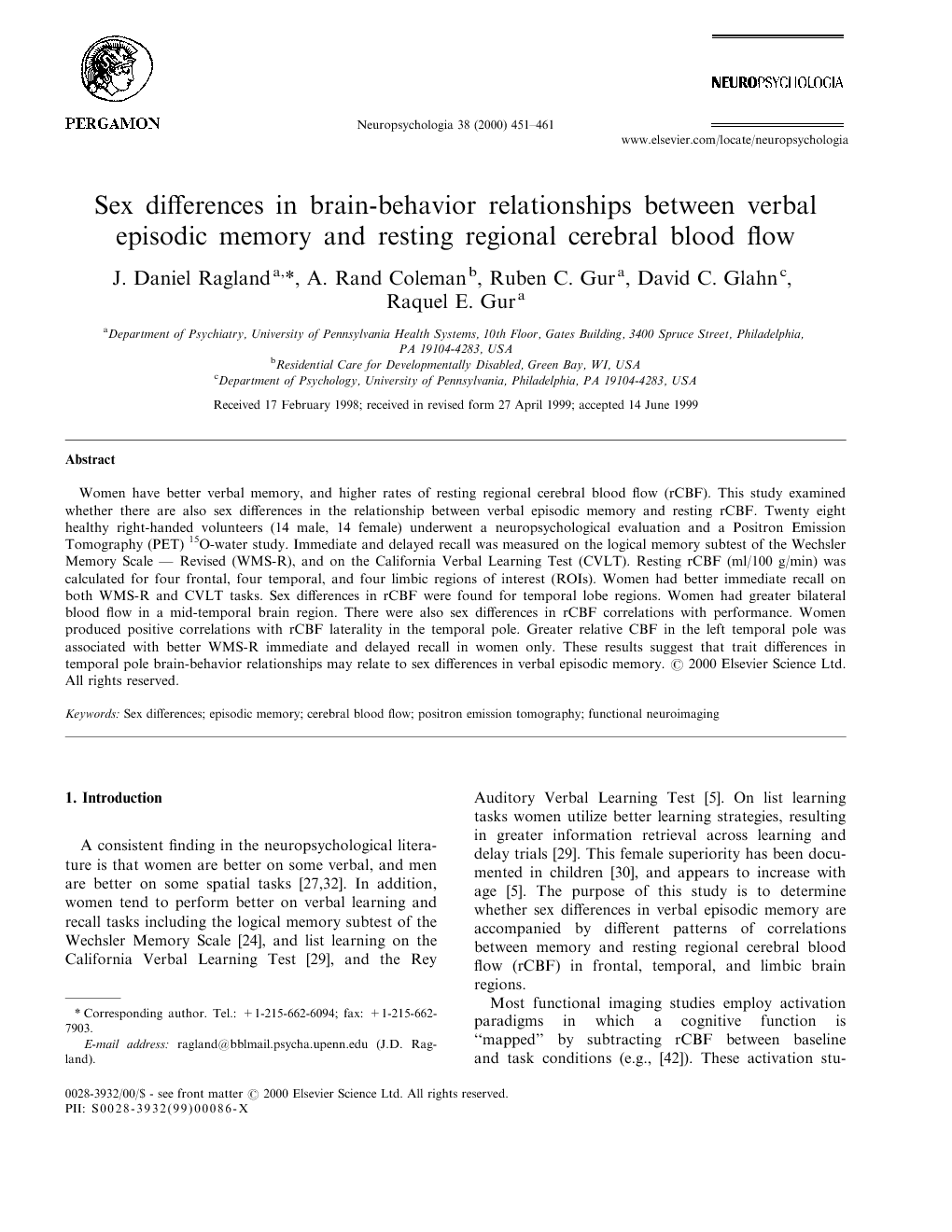 Women have better verbal memory, and higher rates of resting regional cerebral blood flow (rCBF). This study examined whether there are also sex differences in the relationship between verbal episodic memory and resting rCBF. Twenty eight healthy right-handed volunteers (14 male, 14 female) underwent a neuropsychological evaluation and a Positron Emission Tomography (PET) 15O-water study. Immediate and delayed recall was measured on the logical memory subtest of the Wechsler Memory Scale — Revised (WMS-R), and on the California Verbal Learning Test (CVLT). Resting rCBF (ml/100 g/min) was calculated for four frontal, four temporal, and four limbic regions of interest (ROIs). Women had better immediate recall on both WMS-R and CVLT tasks. Sex differences in rCBF were found for temporal lobe regions. Women had greater bilateral blood flow in a mid-temporal brain region. There were also sex differences in rCBF correlations with performance. Women produced positive correlations with rCBF laterality in the temporal pole. Greater relative CBF in the left temporal pole was associated with better WMS-R immediate and delayed recall in women only. These results suggest that trait differences in temporal pole brain-behavior relationships may relate to sex differences in verbal episodic memory.

A consistent finding in the neuropsychological literature is that women are better on some verbal, and men are better on some spatial tasks [27] and [32]. In addition, women tend to perform better on verbal learning and recall tasks including the logical memory subtest of the Wechsler Memory Scale [24], and list learning on the California Verbal Learning Test [29], and the Rey Auditory Verbal Learning Test [5]. On list learning tasks women utilize better learning strategies, resulting in greater information retrieval across learning and delay trials [29]. This female superiority has been documented in children [30], and appears to increase with age [5]. The purpose of this study is to determine whether sex differences in verbal episodic memory are accompanied by different patterns of correlations between memory and resting regional cerebral blood flow (rCBF) in frontal, temporal, and limbic brain regions. Most functional imaging studies employ activation paradigms in which a cognitive function is “mapped” by subtracting rCBF between baseline and task conditions (e.g., [42]). These activation studies have contributed to our understanding of brain-behavior relationships. However, resting rCBF also provides a valuable measure of how well brain regions are perfused with blood. Better cerebral perfusion translates to greater availability of oxygen and nutrients which, in turn, facilitates neural response to cognitive demands. Although a resting baseline condition is relatively unstructured, it yields reproducible data [63], that correlate with neuropsychological performance [21]. Whereas rCBF activation studies measure a state-dependent phenomenon, resting rCBF may be sensitive to trait variables such as sex differences [19]. With a few exceptions [34] and [35], investigators have documented higher rates of resting global CBF in women, using both 133Xenon-clearance [19], [33] and [48], and positron emission tomography (PET) 15O-water methods [3] and [45]. A tendency for women to show less strongly lateralized rCBF in frontal lobe regions has also been documented [13] and [48]. Although sex differences in verbal memory and resting cerebral perfusion have been found, there have been few attempts to relate behavioral to physiologic data in healthy subjects. In a PET rCBF study of normal aging, Eustache and colleagues [14] found positive correlations between verbal paired associate learning and left hippocampal and thalamic resting blood flow. However, they did not examine the effect of gender. In a PET glucose metabolism study of patients with schizophrenia, Mozley et al. [38] found that increased left hemisphere metabolism in inferior frontal, inferior temporal, mid-temporal, and superior temporal regions in patients with schizophrenia predicted worse logical memory recall on the Wechsler Memory Scale. They did not study healthy participants or examine sex differences. The remaining studies that relate resting rCBF with neuropsychological performance have done so primarily for neurological populations including stroke [57], and progressive dementia [9] and [18], and have not investigated sex effects. Thus, there is preliminary evidence of positive relationships between resting pre-frontal, temporal, and limbic rCBF and verbal memory that may be reversed for glucose metabolism in disease states such as schizophrenia. However, these relationships have not been examined separately for healthy men and women. The pre-frontal, temporal, and limbic regions of interest (ROIs) examined in the current study comprise components of an integrated fronto-temporal network [16] and [17] associated with working and episodic memory. This network has been shown to mediate perceptual and mnemonic processing of object identity in primates [12], [36] and [67], and has been implicated in PET activation studies of working memory (e.g., [49] and [53]), and episodic memory (e.g., [1], [40], [45] and [61]). This network will be examined for sex differences in rCBF, and sex differences in rCBF correlations with verbal memory performance.