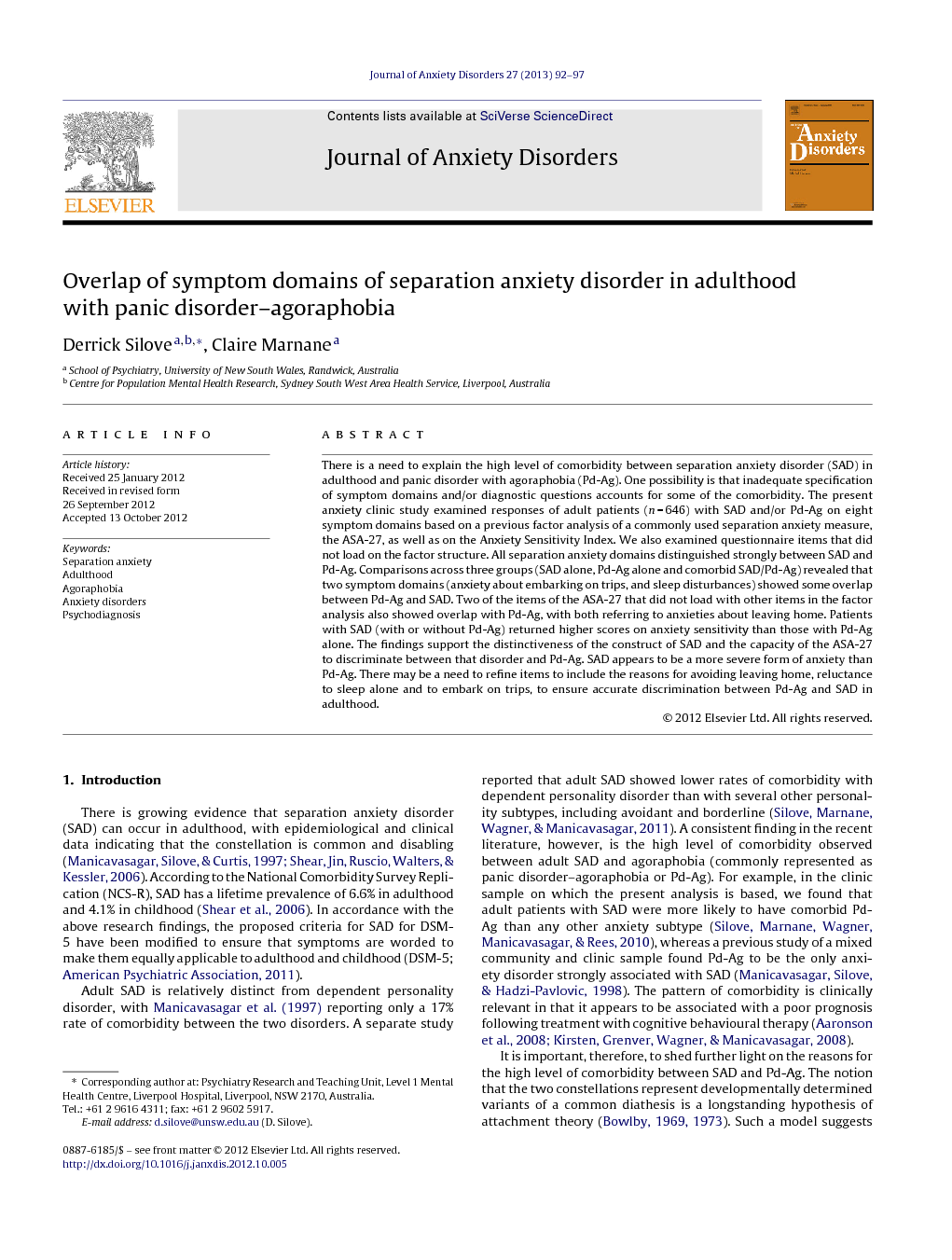 There is a need to explain the high level of comorbidity between separation anxiety disorder (SAD) in adulthood and panic disorder with agoraphobia (Pd-Ag). One possibility is that inadequate specification of symptom domains and/or diagnostic questions accounts for some of the comorbidity. The present anxiety clinic study examined responses of adult patients (n = 646) with SAD and/or Pd-Ag on eight symptom domains based on a previous factor analysis of a commonly used separation anxiety measure, the ASA-27, as well as on the Anxiety Sensitivity Index. We also examined questionnaire items that did not load on the factor structure. All separation anxiety domains distinguished strongly between SAD and Pd-Ag. Comparisons across three groups (SAD alone, Pd-Ag alone and comorbid SAD/Pd-Ag) revealed that two symptom domains (anxiety about embarking on trips, and sleep disturbances) showed some overlap between Pd-Ag and SAD. Two of the items of the ASA-27 that did not load with other items in the factor analysis also showed overlap with Pd-Ag, with both referring to anxieties about leaving home. Patients with SAD (with or without Pd-Ag) returned higher scores on anxiety sensitivity than those with Pd-Ag alone. The findings support the distinctiveness of the construct of SAD and the capacity of the ASA-27 to discriminate between that disorder and Pd-Ag. SAD appears to be a more severe form of anxiety than Pd-Ag. There may be a need to refine items to include the reasons for avoiding leaving home, reluctance to sleep alone and to embark on trips, to ensure accurate discrimination between Pd-Ag and SAD in adulthood.

There is growing evidence that separation anxiety disorder (SAD) can occur in adulthood, with epidemiological and clinical data indicating that the constellation is common and disabling (Manicavasagar et al., 1997 and Shear et al., 2006). According to the National Comorbidity Survey Replication (NCS-R), SAD has a lifetime prevalence of 6.6% in adulthood and 4.1% in childhood (Shear et al., 2006). In accordance with the above research findings, the proposed criteria for SAD for DSM-5 have been modified to ensure that symptoms are worded to make them equally applicable to adulthood and childhood (DSM-5; American Psychiatric Association, 2011). Adult SAD is relatively distinct from dependent personality disorder, with Manicavasagar et al. (1997) reporting only a 17% rate of comorbidity between the two disorders. A separate study reported that adult SAD showed lower rates of comorbidity with dependent personality disorder than with several other personality subtypes, including avoidant and borderline (Silove, Marnane, Wagner, & Manicavasagar, 2011). A consistent finding in the recent literature, however, is the high level of comorbidity observed between adult SAD and agoraphobia (commonly represented as panic disorder–agoraphobia or Pd-Ag). For example, in the clinic sample on which the present analysis is based, we found that adult patients with SAD were more likely to have comorbid Pd-Ag than any other anxiety subtype (Silove, Marnane, Wagner, Manicavasagar, & Rees, 2010), whereas a previous study of a mixed community and clinic sample found Pd-Ag to be the only anxiety disorder strongly associated with SAD (Manicavasagar, Silove, & Hadzi-Pavlovic, 1998). The pattern of comorbidity is clinically relevant in that it appears to be associated with a poor prognosis following treatment with cognitive behavioural therapy (Aaronson et al., 2008 and Kirsten et al., 2008). It is important, therefore, to shed further light on the reasons for the high level of comorbidity between SAD and Pd-Ag. The notion that the two constellations represent developmentally determined variants of a common diathesis is a longstanding hypothesis of attachment theory (Bowlby, 1969 and Bowlby, 1973). Such a model suggests that a combination of biological and developmental factors generate persisting attachment anxieties that manifest as SAD in earlier life and agoraphobia in adulthood (Klein, 1980). If that model is correct, then patients with adult SAD and Pd-Ag should show substantial overlap in their responses to items on a separation anxiety symptom measure. The recent formulation of the construct of a Pd-Ag spectrum disorder represents a variation of this theme, in which separation anxiety forms one component of the proposed broader constellation (Rucci et al., 2009). Early genetic data offers some supportive evidence for that model (Roberson-Nay, Eaves, Hettema, Kendler, & Silberg, 2012). Again, if that model is correct, persons with Pd-Ag should score high on the range of separation anxiety symptoms. It is possible, however, that the two disorders are distinct and that there is a genuine pattern of comorbidity between them, although the observed level of comorbidity might be accentuated by inadequate specification of some symptoms. For example, it is common for patients with Pd-Ag or SAD to be reluctant to leave home. Nevertheless, those with Pd-Ag typically are constrained by fears of experiencing panic in specific situations outside the home, whereas persons with SAD are primarily anxious about losing contact with attachment figures. Failure to make these distinctions in the wording of relevant items may lead to spurious overlap of Pd-Ag and SAD, with patients with either diagnosis endorsing the same symptoms. Examining the symptom domains in which the two diagnostic groups overlap therefore may assist in defining items that require further refinement in order to achieve clearer boundaries between the two disorders. The present study drew on a large database of patients attending an anxiety disorders clinic who were assigned to diagnoses of SAD, Pd-Ag or both. We based the analysis on a previous factor analysis of the items of the Adult Separation Anxiety Questionnaire, ASA-27 (Manicavasagar, Silove, Wagner, & Drobny, 2003). In the present report, we aimed to examine the extent to which symptom domains of separation anxiety discriminated between SAD and Pd-Ag. Specifically, we sought to identify domains specific to separation anxiety disorder, that is, where the presence of comorbid Pd-Ag made no difference to the separation anxiety scores of those with SAD. Conversely, we sought to identify symptom clusters where the presence of comorbid Pd-Ag increased scoring for those with adult SAD, a pattern that would suggest symptom overlap in responses. Finally, we examined the few individual ASA-27 items that failed to load on the factor analysis to assess whether they were particularly poor at discriminating between Pd-Ag and SAD.

The present study suggests that the construct of SAD in adulthood is largely independent of Pd-Ag and that the majority of the underlying symptom domains of the ASA-27 discriminate strongly between the two disorders. The results therefore suggest that overlap between the disorders reflects a pattern of genuine comorbidity. Discrimination in relation to the minor domains in which there was overlap may be improved by attention to the wording of some criteria included in the definition of both disorders; the relevant symptoms being reluctance to leave home, somatic symptoms when anticipating leaving home, and anxieties about sleeping alone. In addition, the fear of going on long trips, a symptom included in the ASA-27 but not in the DSM-IV-TR, may need refining to avoid overlap with Pd-Ag. Further studies also are needed to examine the foundations of the pattern of comorbidity between Pd-Ag and SAD, particularly focusing on the chronological sequencing of onset of the two disorders and the potential of acute separation anxiety symptoms to precipitate recurrent panic, and via that mechanism, agoraphobia.