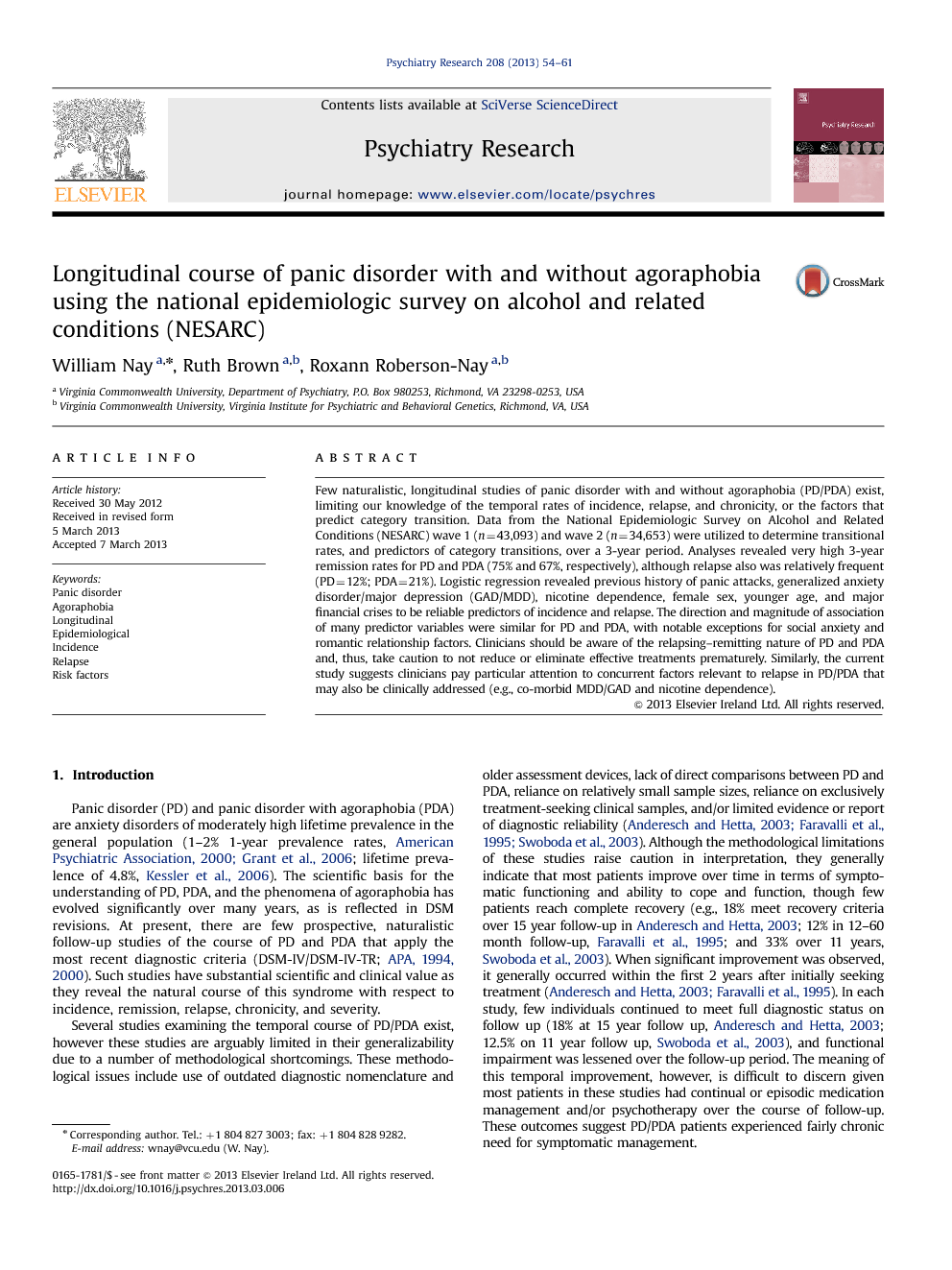 Few naturalistic, longitudinal studies of panic disorder with and without agoraphobia (PD/PDA) exist, limiting our knowledge of the temporal rates of incidence, relapse, and chronicity, or the factors that predict category transition. Data from the National Epidemiologic Survey on Alcohol and Related Conditions (NESARC) wave 1 (n=43,093) and wave 2 (n=34,653) were utilized to determine transitional rates, and predictors of category transitions, over a 3-year period. Analyses revealed very high 3-year remission rates for PD and PDA (75% and 67%, respectively), although relapse also was relatively frequent (PD=12%; PDA=21%). Logistic regression revealed previous history of panic attacks, generalized anxiety disorder/major depression (GAD/MDD), nicotine dependence, female sex, younger age, and major financial crises to be reliable predictors of incidence and relapse. The direction and magnitude of association of many predictor variables were similar for PD and PDA, with notable exceptions for social anxiety and romantic relationship factors. Clinicians should be aware of the relapsing–remitting nature of PD and PDA and, thus, take caution to not reduce or eliminate effective treatments prematurely. Similarly, the current study suggests clinicians pay particular attention to concurrent factors relevant to relapse in PD/PDA that may also be clinically addressed (e.g., co-morbid MDD/GAD and nicotine dependence).

Panic disorder (PD) and panic disorder with agoraphobia (PDA) are anxiety disorders of moderately high lifetime prevalence in the general population (1–2% 1-year prevalence rates, American Psychiatric Association, 2000 and Grant et al., 2006; lifetime prevalence of 4.8%, Kessler et al., 2006). The scientific basis for the understanding of PD, PDA, and the phenomena of agoraphobia has evolved significantly over many years, as is reflected in DSM revisions. At present, there are few prospective, naturalistic follow-up studies of the course of PD and PDA that apply the most recent diagnostic criteria (DSM-IV/DSM-IV-TR; American Psychiatric Association, 1994 and American Psychiatric Association, 2000). Such studies have substantial scientific and clinical value as they reveal the natural course of this syndrome with respect to incidence, remission, relapse, chronicity, and severity. Several studies examining the temporal course of PD/PDA exist, however these studies are arguably limited in their generalizability due to a number of methodological shortcomings. These methodological issues include use of outdated diagnostic nomenclature and older assessment devices, lack of direct comparisons between PD and PDA, reliance on relatively small sample sizes, reliance on exclusively treatment-seeking clinical samples, and/or limited evidence or report of diagnostic reliability (Anderesch and Hetta, 2003, Faravalli et al., 1995 and Swoboda et al., 2003). Although the methodological limitations of these studies raise caution in interpretation, they generally indicate that most patients improve over time in terms of symptomatic functioning and ability to cope and function, though few patients reach complete recovery (e.g., 18% meet recovery criteria over 15 year follow-up in Anderesch and Hetta, 2003; 12% in 12–60 month follow-up, Faravalli et al., 1995; and 33% over 11 years, Swoboda et al., 2003). When significant improvement was observed, it generally occurred within the first 2 years after initially seeking treatment (Anderesch and Hetta, 2003 and Faravalli et al., 1995). In each study, few individuals continued to meet full diagnostic status on follow up (18% at 15 year follow up, Anderesch and Hetta, 2003; 12.5% on 11 year follow up, Swoboda et al., 2003), and functional impairment was lessened over the follow-up period. The meaning of this temporal improvement, however, is difficult to discern given most patients in these studies had continual or episodic medication management and/or psychotherapy over the course of follow-up. These outcomes suggest PD/PDA patients experienced fairly chronic need for symptomatic management. A 12-year follow-up report of the Harvard/Brown Anxiety Disorders Program (HARP) study, a study of treatment-seeking individuals, presents data differentially for PD and PDA (Bruce et al., 2005). The results of this study revealed a relatively low cumulative 0.48 probability of remission for PDA over this long time course (Bruce et al., 2005). This estimate contrasts with a relatively high cumulative 12-year probability of recovery for PD (0.82). It is important, however, to resist the temptation to interpret the recovery numbers for PD as suggesting it is a disorder of typically brief duration or of only modest severity. Indeed, HARP data suggests relapse or recurrence is quite high for both PD (0.56) and PDA (0.58). One earlier community-based (not treatment-seeking) longitudinal study from the Baltimore section of the Epidemiological Catchment Area Study (ECA; Eaton et al., 1998) also examined the course and predictors of PD/PDA. The investigators report incidence of 1.43 per 1000 per year, with nearly twice as many emergent cases of PDA than PD. Looking at risk factors for PD/PDA development, the Baltimore ECA revealed an overall pattern for significant symptoms of anxiety to be present before PD/PDA criteria were met, either in the form of panic attacks/limited-symptom attacks, or chronic symptoms of generalized anxiety. Analyses revealed younger age (<30), female sex, and Caucasian racial identity as identifiable risk factors in this population. Female sex as a risk for relapse (in PD only, as PDA tended to be more stable) also was found in the HARP data (Yonkers et al., 2003), where females exhibited a three-fold greater risk during 8-year follow-up as compared to men. Because there are few naturalistic, epidemiological/community-based longitudinal investigations of PD/PDA, the degree of knowledge and expected generalizability of the specific predictors of disease course, including predictors of transitions from disorder status, is limited. The present study utilizes data from the National Epidemiologic Survey on Alcohol and Related Conditions (NESARC; Grant and Dawson, 2006) Waves 1 (W1) and Waves 2 (W2) to provide independent naturalistic, longitudinal data on the course of PD and PDA in a general population sample (vs. a treatment seeking sample). Stability of diagnostic status was first examined by determining probabilities of transition from one diagnostic category to another (e.g., PD at W1 to No PD/PDA at W2). Cases of incidence, relapse, and chronicity were then further examined by looking at potential risk factors for transition over the NESARC interviewing periods. These include variables that have been associated with new incidence and/or recurrence in past research, such as younger age, female sex, and presence of comorbid psychopathology (Eaton et al., 1998 and Yonkers et al., 2003), and specific psychosocial stressors. A recent review has suggested both cumulative and class-specific (e.g., interpersonal, health-related, etc.) effects of psychosocial stressors on risk for panic (Klauke et al., 2010). The potential predictors that were examined included the presence of psychopathology (i.e. major depression [MDD], generalized anxiety disorder [GAD], social phobia [SoPh], and alcohol and/or nicotine dependence), socio-demographic variables (i.e. sex, age, and marital/relationship status), features of PD (i.e. age of onset, duration of longest episode, number of episodes, medication, therapy, and panic attack in the past year), and psychosocial stressors (i.e. loss of employment, death of a family member, change in romantic relationship, and major financial crisis).