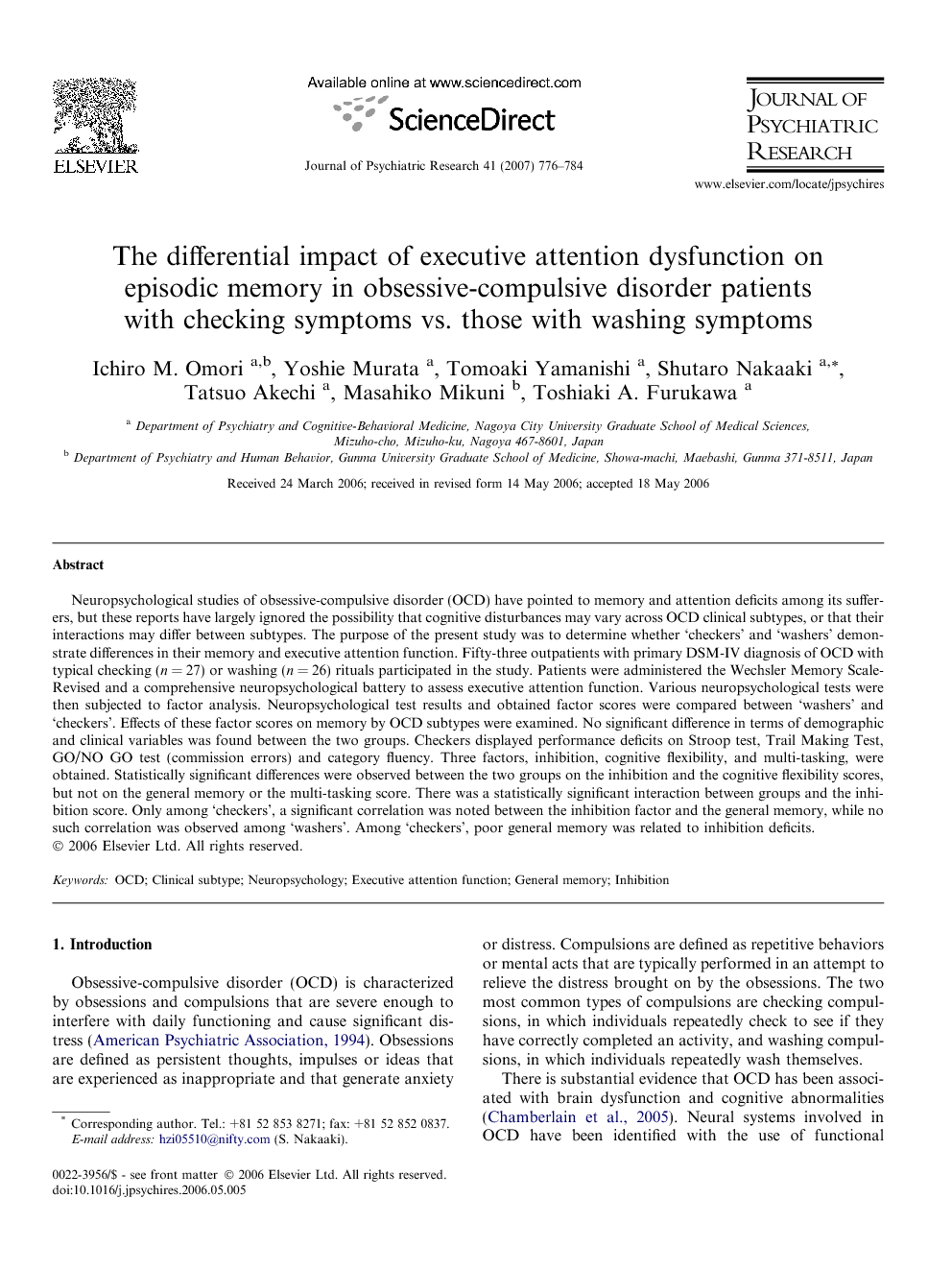 Neuropsychological studies of obsessive-compulsive disorder (OCD) have pointed to memory and attention deficits among its sufferers, but these reports have largely ignored the possibility that cognitive disturbances may vary across OCD clinical subtypes, or that their interactions may differ between subtypes. The purpose of the present study was to determine whether ‘checkers’ and ‘washers’ demonstrate differences in their memory and executive attention function. Fifty-three outpatients with primary DSM-IV diagnosis of OCD with typical checking (n = 27) or washing (n = 26) rituals participated in the study. Patients were administered the Wechsler Memory Scale-Revised and a comprehensive neuropsychological battery to assess executive attention function. Various neuropsychological tests were then subjected to factor analysis. Neuropsychological test results and obtained factor scores were compared between ‘washers’ and ‘checkers’. Effects of these factor scores on memory by OCD subtypes were examined. No significant difference in terms of demographic and clinical variables was found between the two groups. Checkers displayed performance deficits on Stroop test, Trail Making Test, GO/NO GO test (commission errors) and category fluency. Three factors, inhibition, cognitive flexibility, and multi-tasking, were obtained. Statistically significant differences were observed between the two groups on the inhibition and the cognitive flexibility scores, but not on the general memory or the multi-tasking score. There was a statistically significant interaction between groups and the inhibition score. Only among ‘checkers’, a significant correlation was noted between the inhibition factor and the general memory, while no such correlation was observed among ‘washers’. Among ‘checkers’, poor general memory was related to inhibition deficits.

Obsessive-compulsive disorder (OCD) is characterized by obsessions and compulsions that are severe enough to interfere with daily functioning and cause significant distress (American Psychiatric Association, 1994). Obsessions are defined as persistent thoughts, impulses or ideas that are experienced as inappropriate and that generate anxiety or distress. Compulsions are defined as repetitive behaviors or mental acts that are typically performed in an attempt to relieve the distress brought on by the obsessions. The two most common types of compulsions are checking compulsions, in which individuals repeatedly check to see if they have correctly completed an activity, and washing compulsions, in which individuals repeatedly wash themselves. There is substantial evidence that OCD has been associated with brain dysfunction and cognitive abnormalities (Chamberlain et al., 2005). Neural systems involved in OCD have been identified with the use of functional neuroimaging methods, such as positron emission tomography (PET) (Baxter et al., 1987 and Swedo et al., 1989), single photon emission computed tomography (SPECT) (Machlin et al., 1991 and Busatto et al., 2000) and functional magnetic resonance imaging (f-MRI) (Pujol et al., 1999 and Ursu et al., 2003). These studies have provided consistent evidence of increased and/or decreased activity in local regions such as the anterior cingulate cortex, the orbitofrontal cortex (OFC) and the caudate nucleus. Further evidence of frontal-striatal dysfunction comes from studies noting an association between OCD or OCD-like behavior and neurologic disorders, such as Parkinson disease (Daniele et al., 1997), Gilles de la Tourette syndrome (Como et al., 2005), Huntington disease (Cummings and Cunningham, 1992) and frontal lobe injury (Donovan and Barry, 1994 and Berthier et al., 1996). These findings, taken together, have led investigators to hypothesize that OCD subjects have specific neuropsychological deficits related to changes in brain function and these deficits exacerbate and/or maintain symptoms. Many studies have examined memory and executive attention function in OCD. However results of these studies were frequently inconsistent. Several studies have found that OCD patients have selective neuropsychological deficits in executive attention function, verbal and non verbal memory, and visuospatial and visuoconstructial skills (Kuelz et al., 2004 and Muller and Roberts, 2005). A number of studies have also investigated interrelations between different neuropsychological variables in OCD and these found that impaired use of organization strategies may also contribute to memory dysfunction (Savage et al., 1999 and Savage et al., 2000). On the other hand, some studies found no evidence of neuropsychological deficits in OCD (Abbruzzese et al., 1995 and Simpson et al., 2006). OCD is a heterogeneous condition that is likely composed of multiple clinical subtypes that are unique in terms of their etiological pathways and their psychological correlates (McKay et al., 2004). Nonetheless previous work on neuropsychological deficits has largely ignored the possibility that cognitive disturbances may vary across subtypes, and the possibility that their interactions may differ between subtypes. We therefore set out to compare the neuropsychological performance in the domains of memory, executive attention function among checkers and washers, and to evaluate the mediating effects of executive attention function on memory in OCD.