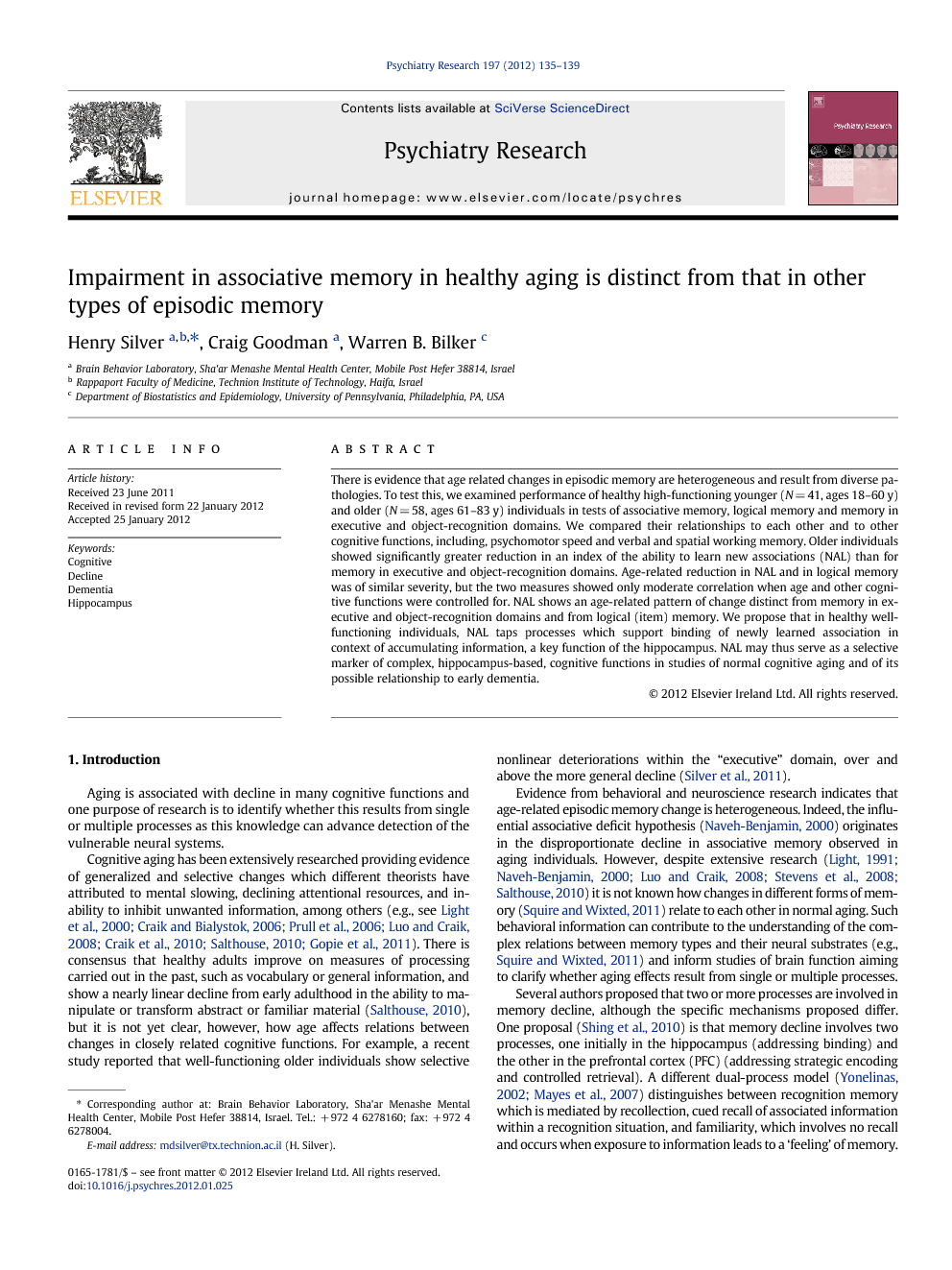 There is evidence that age related changes in episodic memory are heterogeneous and result from diverse pathologies. To test this, we examined performance of healthy high-functioning younger (N = 41, ages 18–60 y) and older (N = 58, ages 61–83 y) individuals in tests of associative memory, logical memory and memory in executive and object-recognition domains. We compared their relationships to each other and to other cognitive functions, including, psychomotor speed and verbal and spatial working memory. Older individuals showed significantly greater reduction in an index of the ability to learn new associations (NAL) than for memory in executive and object-recognition domains. Age-related reduction in NAL and in logical memory was of similar severity, but the two measures showed only moderate correlation when age and other cognitive functions were controlled for. NAL shows an age-related pattern of change distinct from memory in executive and object-recognition domains and from logical (item) memory. We propose that in healthy well-functioning individuals, NAL taps processes which support binding of newly learned association in context of accumulating information, a key function of the hippocampus. NAL may thus serve as a selective marker of complex, hippocampus-based, cognitive functions in studies of normal cognitive aging and of its possible relationship to early dementia.

Aging is associated with decline in many cognitive functions and one purpose of research is to identify whether this results from single or multiple processes as this knowledge can advance detection of the vulnerable neural systems. Cognitive aging has been extensively researched providing evidence of generalized and selective changes which different theorists have attributed to mental slowing, declining attentional resources, and inability to inhibit unwanted information, among others (e.g., see Light et al., 2000, Craik and Bialystok, 2006, Prull et al., 2006, Luo and Craik, 2008, Craik et al., 2010, Salthouse, 2010 and Gopie et al., 2011). There is consensus that healthy adults improve on measures of processing carried out in the past, such as vocabulary or general information, and show a nearly linear decline from early adulthood in the ability to manipulate or transform abstract or familiar material (Salthouse, 2010), but it is not yet clear, however, how age affects relations between changes in closely related cognitive functions. For example, a recent study reported that well-functioning older individuals show selective nonlinear deteriorations within the “executive” domain, over and above the more general decline (Silver et al., 2011). Evidence from behavioral and neuroscience research indicates that age-related episodic memory change is heterogeneous. Indeed, the influential associative deficit hypothesis (Naveh-Benjamin, 2000) originates in the disproportionate decline in associative memory observed in aging individuals. However, despite extensive research (Light, 1991, Naveh-Benjamin, 2000, Luo and Craik, 2008, Stevens et al., 2008 and Salthouse, 2010) it is not known how changes in different forms of memory (Squire and Wixted, 2011) relate to each other in normal aging. Such behavioral information can contribute to the understanding of the complex relations between memory types and their neural substrates (e.g., Squire and Wixted, 2011) and inform studies of brain function aiming to clarify whether aging effects result from single or multiple processes. Several authors proposed that two or more processes are involved in memory decline, although the specific mechanisms proposed differ. One proposal (Shing et al., 2010) is that memory decline involves two processes, one initially in the hippocampus (addressing binding) and the other in the prefrontal cortex (PFC) (addressing strategic encoding and controlled retrieval). A different dual-process model (Yonelinas, 2002 and Mayes et al., 2007) distinguishes between recognition memory which is mediated by recollection, cued recall of associated information within a recognition situation, and familiarity, which involves no recall and occurs when exposure to information leads to a ‘feeling’ of memory. Recollection is postulated to rely on the hippocampus and prefrontal cortex, and familiarity on para-hippocampal regions. Other models have also been proposed (Bugaiska et al., 2007, Luo and Craik, 2008, Stevens et al., 2008 and Salthouse, 2010). If memory processes are behaviorally separable, then their neural substrates may be differentially vulnerable to aging. Indeed, imaging studies indicate that age-related cognitive decline may involve distinct hippocampus and PFC-based patterns (Kramer et al., 2007), although some researchers (Wixted and Squire, 2011) believe that distinctions such as between recollection and familiarity are less likely to shed light on functional organization of the medial temporal lobe than the neuroanatomy and neurophysiology findings which indicate that medial temporal lobe structures process different attributes of experience. Identifying specific patterns of memory decline in aging healthy individuals is difficult since tests often tap several cognitive processes. Further, elderly individuals show decline in many cognitive functions other than memory and use diverse cognitive strategies and compensatory adaptations which impact on test performance. Experimenter constraint too can influence strategy (Rabbitt, 1997) and confound understanding of the relationships between memory functions which occur in “real life” processing. Research into the evolution of memory decline and the underlying neural changes in aging and illness would benefit from availability of selective measures of specific memory functions which can be related to specific neural systems. In this study we aimed to identify such measures and focused on the ability to learn new associations. Associative learning is sensitive to aging (Naveh-Benjamin, 2000) and linked with hippocampal function. We calculated an index designed to measure the ability to learn new associations with minimum influence of other memory processes and postulated that it can be differentiated from change in memory in executive and object-recognition tasks, which are dependent on prefrontal (Goldman-Rakic, 1996 and Wilson et al., 2010) and temporo-parietal (Sergent et al., 1992) regions respectively. We asked the following questions: 1. Does the effect of aging on associative memory differ from that on logical memory and on memory in executive and object-recognition tasks? 2. What is the relationship between associative and other types of memory in aging? To minimize interindividual variability in cognitive performance and potential confounds from presence of early dementia, we studied selected well-functioning healthy individuals. We included measures of verbal and spatial working memory and psychomotor speed to enable analysis in a multivariate setting.