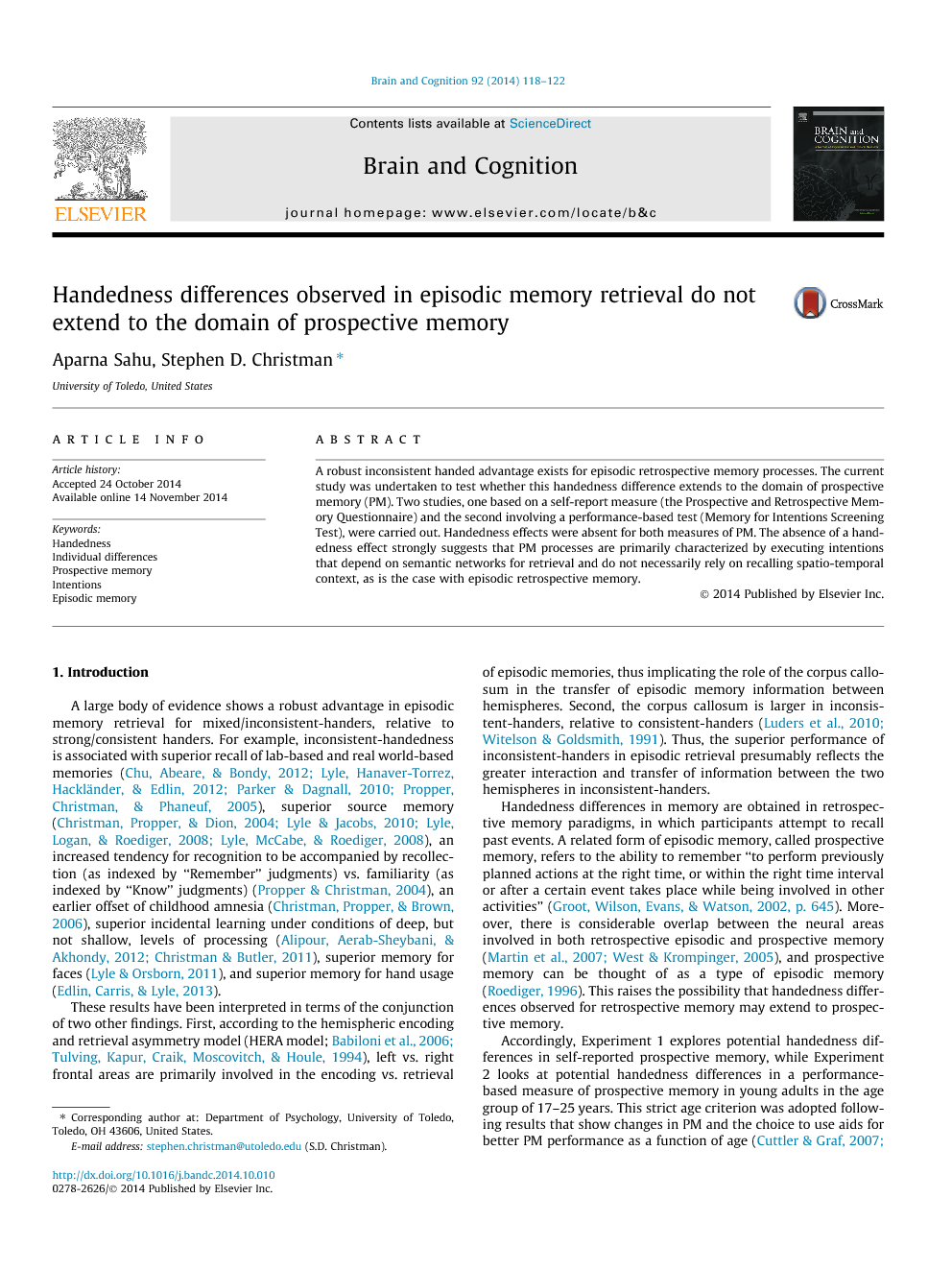 A robust inconsistent handed advantage exists for episodic retrospective memory processes. The current study was undertaken to test whether this handedness difference extends to the domain of prospective memory (PM). Two studies, one based on a self-report measure (the Prospective and Retrospective Memory Questionnaire) and the second involving a performance-based test (Memory for Intentions Screening Test), were carried out. Handedness effects were absent for both measures of PM. The absence of a handedness effect strongly suggests that PM processes are primarily characterized by executing intentions that depend on semantic networks for retrieval and do not necessarily rely on recalling spatio-temporal context, as is the case with episodic retrospective memory.

A large body of evidence shows a robust advantage in episodic memory retrieval for mixed/inconsistent-handers, relative to strong/consistent handers. For example, inconsistent-handedness is associated with superior recall of lab-based and real world-based memories (Chu et al., 2012, Lyle et al., 2012, Parker and Dagnall, 2010 and Propper et al., 2005), superior source memory (Christman et al., 2004, Lyle and Jacobs, 2010, Lyle et al., 2008 and Lyle et al., 2008), an increased tendency for recognition to be accompanied by recollection (as indexed by “Remember” judgments) vs. familiarity (as indexed by “Know” judgments) (Propper & Christman, 2004), an earlier offset of childhood amnesia (Christman, Propper, & Brown, 2006), superior incidental learning under conditions of deep, but not shallow, levels of processing (Alipour et al., 2012 and Christman and Butler, 2011), superior memory for faces (Lyle & Orsborn, 2011), and superior memory for hand usage (Edlin, Carris, & Lyle, 2013). These results have been interpreted in terms of the conjunction of two other findings. First, according to the hemispheric encoding and retrieval asymmetry model (HERA model; Babiloni et al., 2006 and Tulving et al., 1994), left vs. right frontal areas are primarily involved in the encoding vs. retrieval of episodic memories, thus implicating the role of the corpus callosum in the transfer of episodic memory information between hemispheres. Second, the corpus callosum is larger in inconsistent-handers, relative to consistent-handers (Luders et al., 2010 and Witelson and Goldsmith, 1991). Thus, the superior performance of inconsistent-handers in episodic retrieval presumably reflects the greater interaction and transfer of information between the two hemispheres in inconsistent-handers. Handedness differences in memory are obtained in retrospective memory paradigms, in which participants attempt to recall past events. A related form of episodic memory, called prospective memory, refers to the ability to remember “to perform previously planned actions at the right time, or within the right time interval or after a certain event takes place while being involved in other activities” (Groot, Wilson, Evans, & Watson, 2002, p. 645). Moreover, there is considerable overlap between the neural areas involved in both retrospective episodic and prospective memory (Martin et al., 2007 and West and Krompinger, 2005), and prospective memory can be thought of as a type of episodic memory (Roediger, 1996). This raises the possibility that handedness differences observed for retrospective memory may extend to prospective memory. Accordingly, Experiment 1 explores potential handedness differences in self-reported prospective memory, while Experiment 2 looks at potential handedness differences in a performance-based measure of prospective memory in young adults in the age group of 17–25 years. This strict age criterion was adopted following results that show changes in PM and the choice to use aids for better PM performance as a function of age (Cuttler and Graf, 2007 and Long et al., 1999). Additionally, the current study is theorized on the rationale that handedness has its links to inter-hemispheric interaction, hence the involvement of the corpus callosum studies show a progressive decline in its myelination with increasing age (e.g., Hasan et al., 2009).