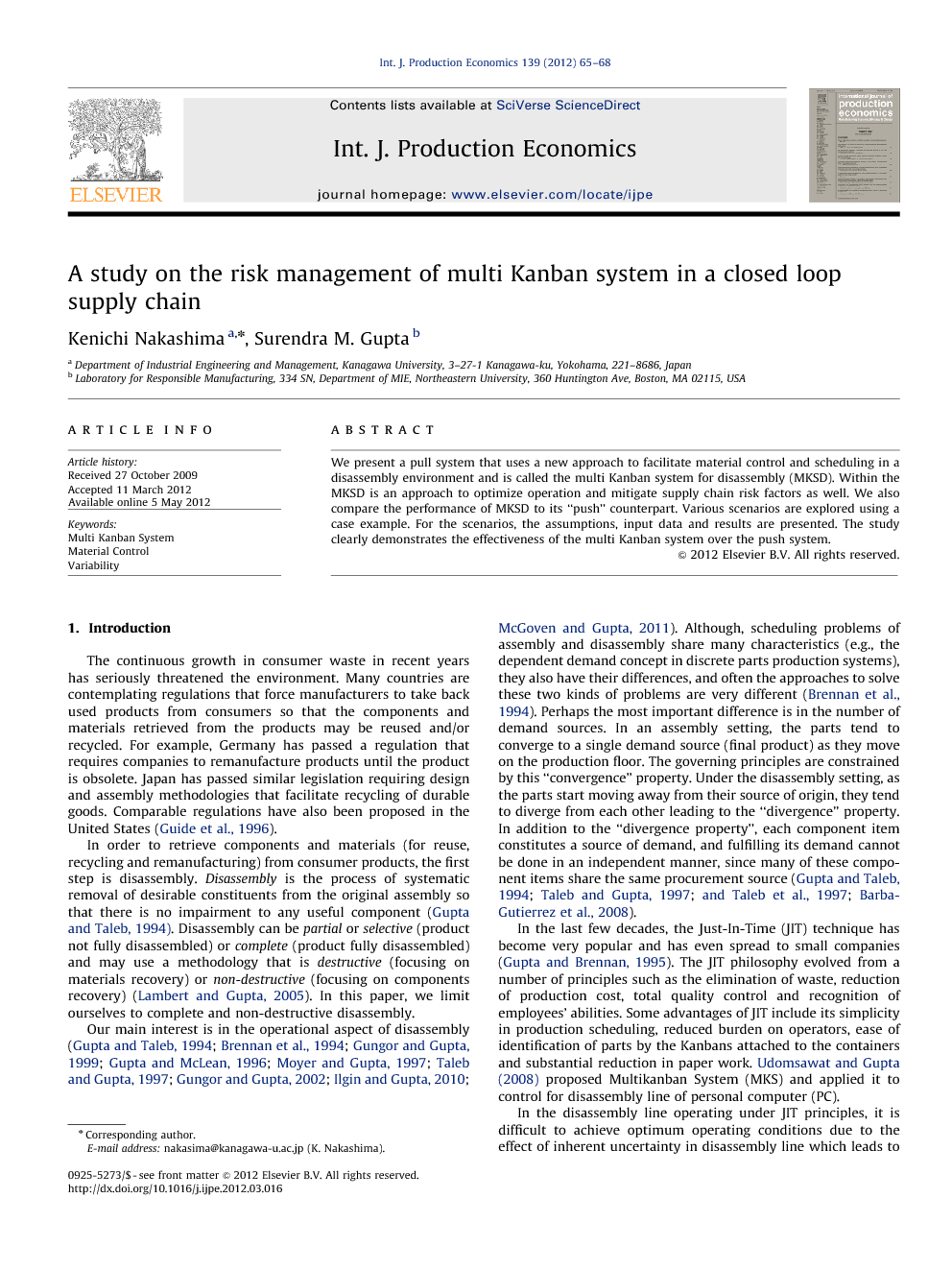 We present a pull system that uses a new approach to facilitate material control and scheduling in a disassembly environment and is called the multi Kanban system for disassembly (MKSD). Within the MKSD is an approach to optimize operation and mitigate supply chain risk factors as well. We also compare the performance of MKSD to its “push” counterpart. Various scenarios are explored using a case example. For the scenarios, the assumptions, input data and results are presented. The study clearly demonstrates the effectiveness of the multi Kanban system over the push system.

The continuous growth in consumer waste in recent years has seriously threatened the environment. Many countries are contemplating regulations that force manufacturers to take back used products from consumers so that the components and materials retrieved from the products may be reused and/or recycled. For example, Germany has passed a regulation that requires companies to remanufacture products until the product is obsolete. Japan has passed similar legislation requiring design and assembly methodologies that facilitate recycling of durable goods. Comparable regulations have also been proposed in the United States (Guide et al., 1996). In order to retrieve components and materials (for reuse, recycling and remanufacturing) from consumer products, the first step is disassembly. Disassembly is the process of systematic removal of desirable constituents from the original assembly so that there is no impairment to any useful component (Gupta and Taleb, 1994). Disassembly can be partial or selective (product not fully disassembled) or complete (product fully disassembled) and may use a methodology that is destructive (focusing on materials recovery) or non-destructive (focusing on components recovery) (Lambert and Gupta, 2005). In this paper, we limit ourselves to complete and non-destructive disassembly. Our main interest is in the operational aspect of disassembly (Gupta and Taleb, 1994, Brennan et al., 1994, Gungor and Gupta, 1999, Gupta and McLean, 1996, Moyer and Gupta, 1997, Taleb and Gupta, 1997, Gungor and Gupta, 2002, Ilgin and Gupta, 2010 and McGoven and Gupta, 2011). Although, scheduling problems of assembly and disassembly share many characteristics (e.g., the dependent demand concept in discrete parts production systems), they also have their differences, and often the approaches to solve these two kinds of problems are very different (Brennan et al., 1994). Perhaps the most important difference is in the number of demand sources. In an assembly setting, the parts tend to converge to a single demand source (final product) as they move on the production floor. The governing principles are constrained by this “convergence” property. Under the disassembly setting, as the parts start moving away from their source of origin, they tend to diverge from each other leading to the “divergence” property. In addition to the “divergence property”, each component item constitutes a source of demand, and fulfilling its demand cannot be done in an independent manner, since many of these component items share the same procurement source (Gupta and Taleb, 1994, Taleb and Gupta, 1997, Taleb et al., 1997 and Barba-Gutierrez et al., 2008). In the last few decades, the Just-In-Time (JIT) technique has become very popular and has even spread to small companies (Gupta and Brennan, 1995). The JIT philosophy evolved from a number of principles such as the elimination of waste, reduction of production cost, total quality control and recognition of employees’ abilities. Some advantages of JIT include its simplicity in production scheduling, reduced burden on operators, ease of identification of parts by the Kanbans attached to the containers and substantial reduction in paper work. Udomsawat and Gupta (2008) proposed Multikanban System (MKS) and applied it to control for disassembly line of personal computer (PC). In the disassembly line operating under JIT principles, it is difficult to achieve optimum operating conditions due to the effect of inherent uncertainty in disassembly line which leads to risk. The implementation of JIT in a clossed loop system is fraught with various types of risks, such as, variation in processing times because of the differences in products' conditions, uncertainty in when the product will be returned, imbalanced line, variations in the number of components in the products due to removal or addition of components by customer during their use, variation in the number of nonfunctioning parts and products etc. We can take them as the risk factors in a closed loop supply chain. A few papers (Zhou et al., 2006 and Van der Laan et al., 2006) dealt with remanufacturing risks without multikanban systems. In this paper we present a multi Kanban (pull) system specifically developed for disassembly systems. This type of Kanban system is much more complex than the traditional Kanban system used in production systems. For example, unlike in a production system where the external demand occurs only at the last station, the demand in the disassembly case can also occur at any of the intermittent stations. The reason is that as a product moves on the disassembly line, various components are disassembled at every station and accumulated at that station. Thus, there are potentially as many demand sources as there are number of components. This necessitates the use of at least two types of production Kanbans at every station: one type triggered by the individual component's demand at the station and the other type triggered by the downstream stations’ requirements. We identify the conditions and scenarios unique to such disassembly environment and describe the technique to cope with them. We apply the technique to a case example under various conditions with risk factors and show that this is far superior to the standard push system currently practiced in industry.

In this paper we present a multi kanban (pull) system specifically developed for disassembly systems. This type of Kanban system is much more complex than the traditional Kanban system used in production systems. The numerical experiments illustrated that some scenarios benefit from the implementation of the JIT in a clossed loop supply chain which is fraught with various type of risks such as variation in processing time because of the differences in products' conditions, uncertainty in when the product will be returned, imbalanced line, variations in the number of components in the products due to removal or addition of components by customer during their use, variation in the number of nonfunctioning parts and products etc. We also compared the performance of the push and pull systems which showed that the pull system (MKSD) is superior to the push system.