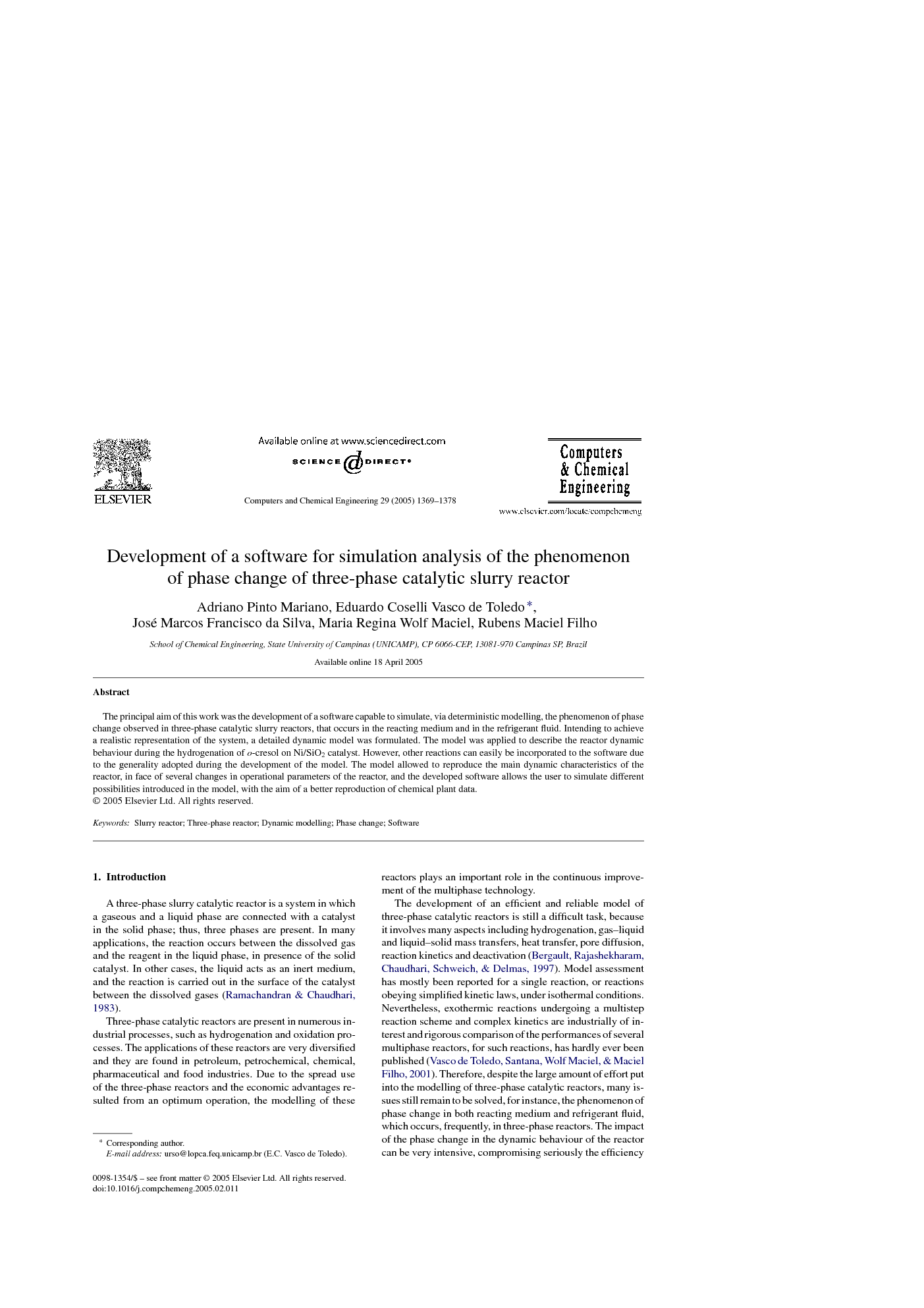 The principal aim of this work was the development of a software capable to simulate, via deterministic modelling, the phenomenon of phase change observed in three-phase catalytic slurry reactors, that occurs in the reacting medium and in the refrigerant fluid. Intending to achieve a realistic representation of the system, a detailed dynamic model was formulated. The model was applied to describe the reactor dynamic behaviour during the hydrogenation of o-cresol on Ni/SiO2 catalyst. However, other reactions can easily be incorporated to the software due to the generality adopted during the development of the model. The model allowed to reproduce the main dynamic characteristics of the reactor, in face of several changes in operational parameters of the reactor, and the developed software allows the user to simulate different possibilities introduced in the model, with the aim of a better reproduction of chemical plant data.

A three-phase slurry catalytic reactor is a system in which a gaseous and a liquid phase are connected with a catalyst in the solid phase; thus, three phases are present. In many applications, the reaction occurs between the dissolved gas and the reagent in the liquid phase, in presence of the solid catalyst. In other cases, the liquid acts as an inert medium, and the reaction is carried out in the surface of the catalyst between the dissolved gases (Ramachandran & Chaudhari, 1983). Three-phase catalytic reactors are present in numerous industrial processes, such as hydrogenation and oxidation processes. The applications of these reactors are very diversified and they are found in petroleum, petrochemical, chemical, pharmaceutical and food industries. Due to the spread use of the three-phase reactors and the economic advantages resulted from an optimum operation, the modelling of these reactors plays an important role in the continuous improvement of the multiphase technology. The development of an efficient and reliable model of three-phase catalytic reactors is still a difficult task, because it involves many aspects including hydrogenation, gas–liquid and liquid–solid mass transfers, heat transfer, pore diffusion, reaction kinetics and deactivation (Bergault, Rajashekharam, Chaudhari, Schweich, & Delmas, 1997). Model assessment has mostly been reported for a single reaction, or reactions obeying simplified kinetic laws, under isothermal conditions. Nevertheless, exothermic reactions undergoing a multistep reaction scheme and complex kinetics are industrially of interest and rigorous comparison of the performances of several multiphase reactors, for such reactions, has hardly ever been published (Vasco de Toledo, Santana, Wolf Maciel, & Maciel Filho, 2001). Therefore, despite the large amount of effort put into the modelling of three-phase catalytic reactors, many issues still remain to be solved, for instance, the phenomenon of phase change in both reacting medium and refrigerant fluid, which occurs, frequently, in three-phase reactors. The impact of the phase change in the dynamic behaviour of the reactor can be very intensive, compromising seriously the efficiency of the controllers in order to maintain a stable reactor operation. The previous knowledge, obtained through simulations, of the operating conditions at which this phenomenon can occur is very important. Thus, the aim of the developed software presented in this work is to allow the user to simulate different aspects involving the phase change in a tubular reactor.

The software developed and presented in this work allowed to simulate some aspects of the dynamic behaviour of three-phase slurry reactor that has hardly ever been published, as the phenomenon of phase change. The model was capable to foresee the phenomenon of phase change of the reacting medium as well as of the refrigerant fluid that introduced perturbations on the temperature of the reactor that surely affect the product specifications. Therefore, the knowledge obtained through the model is essential for a good design and control of three-phase catalytic slurry reactors, important features that enable an efficient and safe operation of the reactor.