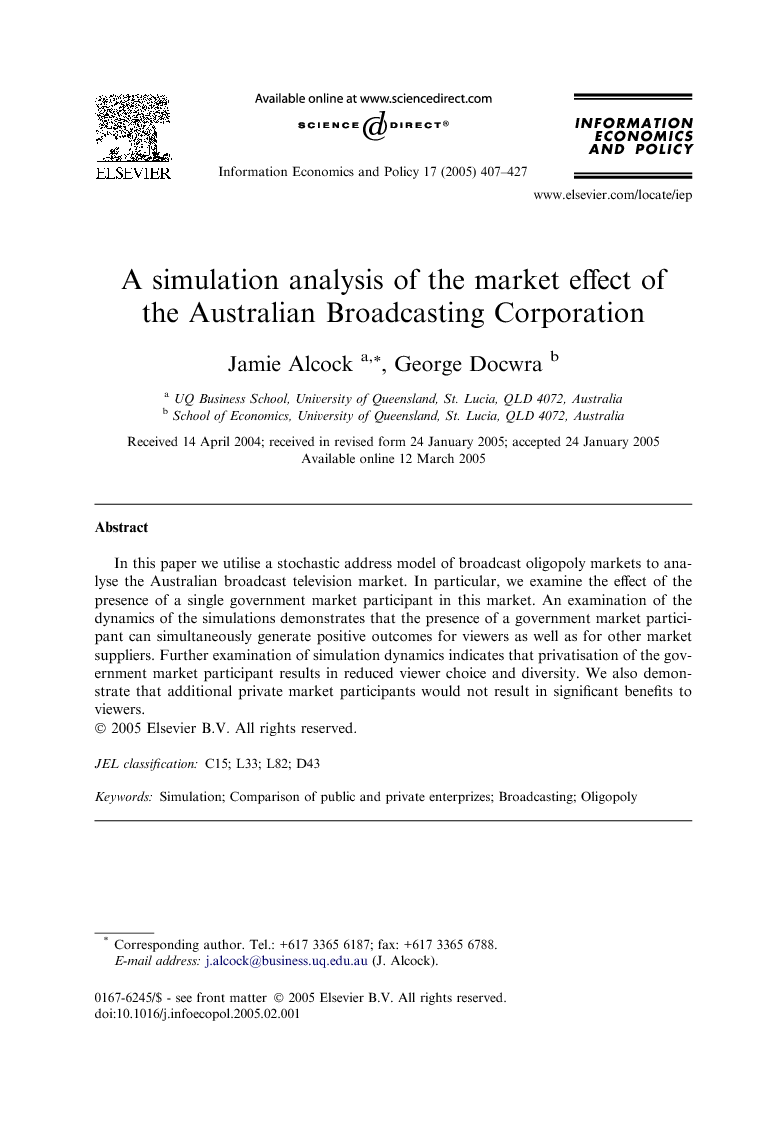 The simulation of the model in Section 3 exposes two key issues which can be empirically tested. The first point is that the presence of a government player can play a significant role in increasing market diversity, to the extent that in the absence of a government player there is almost no product differentiation. Increasing the number of private players in a free market (FM) (devoid of a government player) had little effect on market diversity. Withers, 1980 and Withers, 1982 has argued that for welfare economic reasons the functions of the ABC should include increasing program diversity in the Australian television market. However little econometric analysis has been done in the Australian television market to verify whether this is indeed the case. Among the empirical work that has been done, Withers (1985) finds that adding additional commercial stations to the Australian metropolitan television market did not significantly increase program diversity. In the US television market, Levin, 1971 and Levin, 1980 has empirically investigated the effect of introducing a public station to a previously free market (FM). He determines that adding additional commercial stations to a free market has little effect on market diversity. Further, he explains that market diversity is increased far more by the introduction of a public (non-commercial) broadcaster7 than by addition of another commercial station. Interestingly, he notes that the increase in market diversity is achieved only by judicious selection of the programs presented by the public broadcaster. The second issue raised by our model is that the presence of a government player (or public broadcaster) has the potential to increase the profit of the other, private players in a market. Levin (1980) found that existing commercial stations suffer no apparent economic losses due to the introduction of a public broadcaster in an otherwise free market. In fact, he suggests (1980, p. 271): “that bringing a new public TV station into a market without one may be a highly cost-efficient way to promote types diversity, compared, at least, to the number of commercial stations needed to generate an equivalent amount of diversity.” However we are not aware of any econometric work that suggests that the presence of a government player can have positive economic benefits for the private players. Although we do note that in our modelling a large reason for the beneficial effect of the government player was due to the increase in market capture. Some support of this feature has been obtained by Withers (1985) in the context of television set ownership and use. He discovered that as more people switched on their television sets, they were more likely to watch the ABC than were previous viewers. That is, empirical evidence suggests that the presence of the ABC may, indirectly, increase market capture.