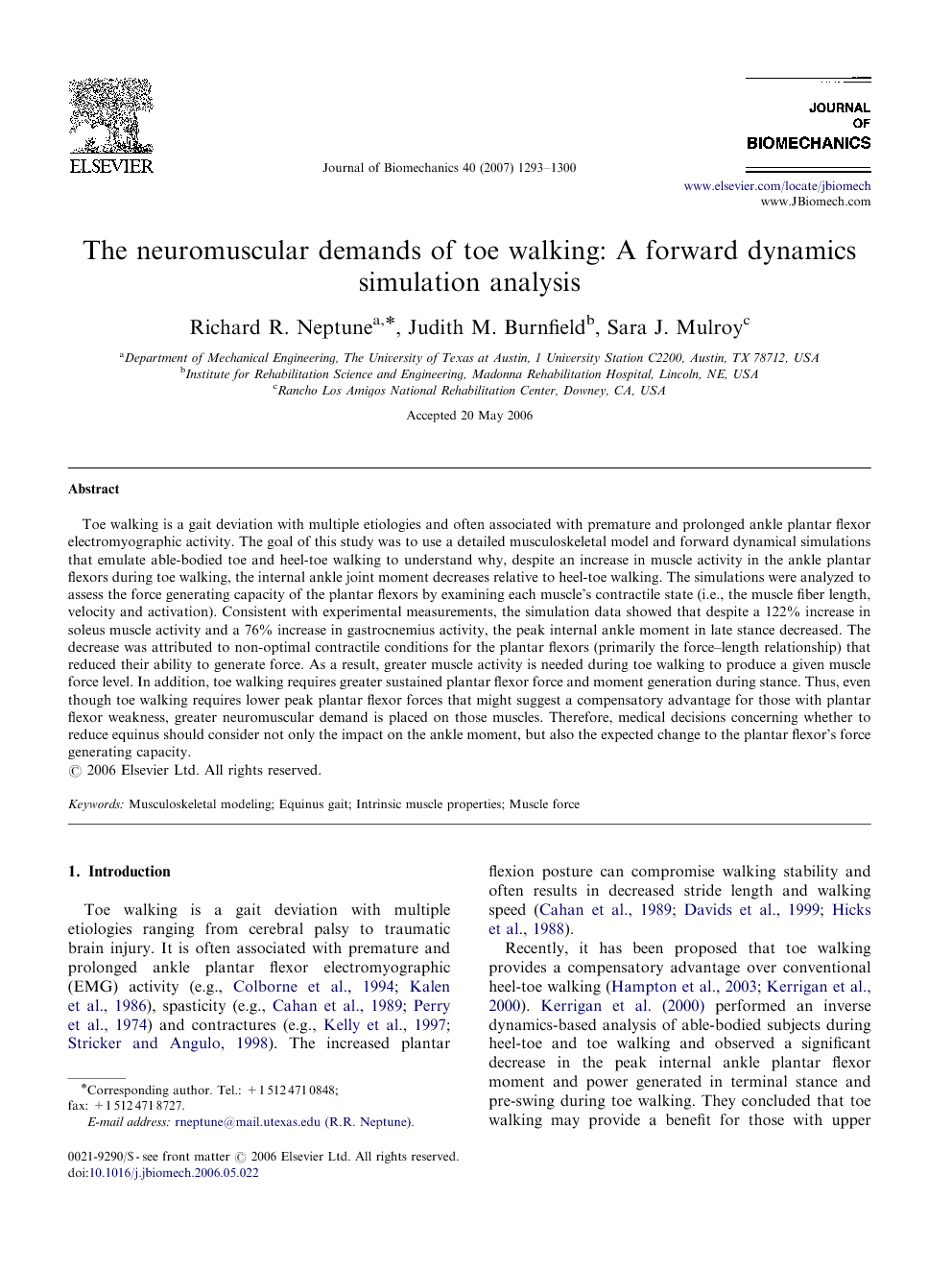 Toe walking is a gait deviation with multiple etiologies and often associated with premature and prolonged ankle plantar flexor electromyographic activity. The goal of this study was to use a detailed musculoskeletal model and forward dynamical simulations that emulate able-bodied toe and heel-toe walking to understand why, despite an increase in muscle activity in the ankle plantar flexors during toe walking, the internal ankle joint moment decreases relative to heel-toe walking. The simulations were analyzed to assess the force generating capacity of the plantar flexors by examining each muscle's contractile state (i.e., the muscle fiber length, velocity and activation). Consistent with experimental measurements, the simulation data showed that despite a 122% increase in soleus muscle activity and a 76% increase in gastrocnemius activity, the peak internal ankle moment in late stance decreased. The decrease was attributed to non-optimal contractile conditions for the plantar flexors (primarily the force–length relationship) that reduced their ability to generate force. As a result, greater muscle activity is needed during toe walking to produce a given muscle force level. In addition, toe walking requires greater sustained plantar flexor force and moment generation during stance. Thus, even though toe walking requires lower peak plantar flexor forces that might suggest a compensatory advantage for those with plantar flexor weakness, greater neuromuscular demand is placed on those muscles. Therefore, medical decisions concerning whether to reduce equinus should consider not only the impact on the ankle moment, but also the expected change to the plantar flexor's force generating capacity.

Consistent with our previous simulation analyses (e.g., Neptune et al., 2001; Neptune and Sasaki, 2005), the dynamic optimization was able to identify muscle excitation patterns such that the toe and heel-toe walking simulations closely emulated the human subject body segment kinematic, ground reaction force and internal joint moment data. The walking speeds were 1.16 and 1.14 m/s for toe and heel-toe walking simulations, respectively. Of particular importance to the present study was the ability of the simulation to closely match the human subject ankle joint kinematics and internal moment profiles. The simulation was able to reproduce these quantities within ±2 standard deviations of the experimental data (Fig. 4). In both simulations, the timing of the plantar flexor activity compared well with the experimental EMG data (Fig. 4). Despite a 122% increase in soleus (SOL) muscle activity during toe walking, the corresponding average SOL muscle force during stance decreased by 19% relative to heel-toe walking (Fig. 5). The gastrocnemius (GAS) muscle activity increased 76% during toe walking, however, this only resulted in a 37% increase in the average GAS muscle force (Fig. 5). The magnitude of the muscle forces was consistent with the net internal ankle joint moment. Despite the increase in plantar flexor activity during toe walking (Fig. 5), the peak ankle moment during late stance decreased slightly (Fig. 6). This reduction in the simulation ankle moment, despite the greater muscle activity, was attributed to a poor contractile state during toe walking, primarily due to the muscles operating at non-optimal muscle fiber lengths when the ankle was in greater plantar flexion (Fig. 4). The mean SOL fiber length normalized to its optimal fiber length during its active region in stance was 0.55 and 0.89 during toe and heel-toe walking, respectively (Fig. 7A). Similarly, the mean values for GAS were 0.59 and 0.90, respectively (Fig. 7A). Thus, both muscles were operating near the onset of the ascending limb of the force–length relationship (Fig. 3A), which greatly reduced their ability to generate force. In contrast, the mean fiber velocities were at low levels and similar in magnitude between the two walking tasks (Fig. 7B). Thus, the force–length relationship was the dominant intrinsic muscle property that decreased the force generating capacity of the plantar flexors during toe walking. In addition to the greater intensity and duration of muscle excitation required for toe walking, maintaining the plantar flexed posture throughout stance required a 65% increase in the mean internal ankle moment during stance (Fig. 6: 1.11 and 0.68 N -m/kg for toe and heel-toe walking, respectively).