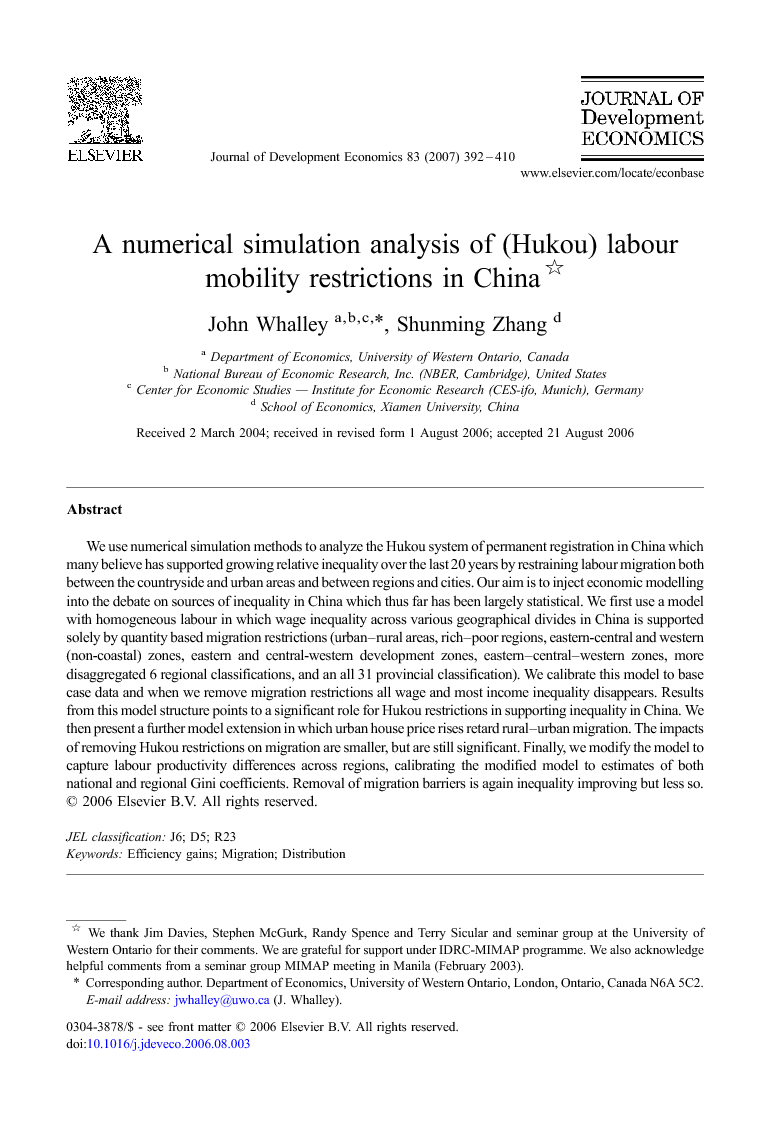 We use numerical simulation methods to analyze the Hukou system of permanent registration in China which many believe has supported growing relative inequality over the last 20 years by restraining labour migration both between the countryside and urban areas and between regions and cities. Our aim is to inject economic modelling into the debate on sources of inequality in China which thus far has been largely statistical. We first use a model with homogeneous labour in which wage inequality across various geographical divides in China is supported solely by quantity based migration restrictions (urban–rural areas, rich–poor regions, eastern-central and western (non-coastal) zones, eastern and central-western development zones, eastern–central–western zones, more disaggregated 6 regional classifications, and an all 31 provincial classification). We calibrate this model to base case data and when we remove migration restrictions all wage and most income inequality disappears. Results from this model structure points to a significant role for Hukou restrictions in supporting inequality in China. We then present a further model extension in which urban house price rises retard rural–urban migration. The impacts of removing Hukou restrictions on migration are smaller, but are still significant. Finally, we modify the model to capture labour productivity differences across regions, calibrating the modified model to estimates of both national and regional Gini coefficients. Removal of migration barriers is again inequality improving but less so.

The statistical literature on inequality in China (Bramall and Jones, 1993, Chen, 1996, Hare and West, 1999, Jalan and Ravallion, 1998, Kanbur and Zhang, 1999, Lyons, 1991, Rozelle, 1994, Tsui, 1991, Tsui, 1993, Tsui, 1996, Tsui, 1998a and Tsui, 1998b) is widely interpreted as pointing to growing national relative inequality in recent years. According to received wisdom based on some of this literature, the national Gini coefficient from China on income inequality has increased to over 0.4 from 0.3 over the last 15 years or so. This change coexists with more slowly growing inequality within the urban and rural segments of the economy (as measured by Gini coefficients), and also within coastal zones and inland segments of the economy. A sharp increase in the income/capita gap across these divides is usually taken to account for increased national relative inequality. Absolute poverty as measured by head count ratios and other measures consistently falls in Chinese data reflecting strong GDP growth in recent years. A number of attempts have been made to account for this inequality change profile using statistical techniques as in the literature listed above. Econometric literature including Zhao (1999) and Shi, Sicular, and Zhao (2002) focuses mainly on the determinants of migration decisions, and not on the size of the efficiency gains involved nor impacts on wage rates in a consistent micro based structure model. Our aim here is to use numerical simulation methods to provide fresh insights on these dimensions of the issue. We focus on the system of Hukou in China, or registered permanent residence, which is location specific. Not having Hukou in urban areas means that migrants receive no education or health benefits and cannot purchase housing, since title to it cannot be registered by them. Effectively, Hukou operates as a barrier to urban/rural migration in China and supports large regional wage differentials which labour markets do not compete away. We ask how much inequality there would have been in China without the Hukou system. Our starting point is the literature on the global consequences of immigration restrictions (see Hamilton and Whalley, 1984). In this literature, differences in both wage rates and GDP/capita across countries are assumed to be supported by immigration restrictions in a world with country specific factor inputs and downward sloping marginal product of labour schedules for otherwise potentially mobile labour. Parameters for an assumed underlying technology are calibrated so as to be consistent with observed data on wage differentials, labour shares of income, and GDP and population by country, and counterfactuals are performed to analyze the impacts of immigration barrier removal. Assumptions that there is homogenous labour across countries or that there are efficiency differences across countries are used as alternatives in these exercises. Here we make calculations for China as to what the impacts of removing internal (Hukou) barriers to regional labour mobility on inequality could be using data on both aggregate and regional GDP/capita using similar methods. In so doing we elaborate on the earlier methodology used to analyze global migration restrictions by using a simple basic model which we sequentially modify in further model elaborations. We first ignore inequality within regions and treat labour as homogenous both across regions and across individuals. In this model wage rates across regions are equalized when migration restrictions are moved. With region specific fixed factors, regional differences in GDP/capita do not disappear with barrier removal although they fall sharply and national inequality is much reduced. Significant efficiency gains also accrue from barrier removal in this model. We also discuss the implications of relaxing the assumption of region specific immobile capital for results. We then introduce region specific house price effects and capture their dampening impacts on migration. This is motivated by the desire to also capture the impacts of increases in urban house prices and housing rents in China on urban–rural mobility over 10 years. We develop a two good general equilibrium model with goods and housing, in which location specific housing stocks support differing urban and rural house prices. In equilibrium migration equalizes the real value of wage rates and we incorporate differences in house prices across regions through region specific true cost of living indices. Removing Hukou restrictions in this model again generates labour flows into urban areas which are now smaller, and significant redistribution occurs between urban dwellers whose house prices rise and rural dwellers whose house prices fall. Finally, we extend the basic model by also assuming a distribution of labour productivities (or efficiency types) within each region and calibrate an extended model to both regional and national estimates of Gini coefficients before barrier removal, and also regional and national data on GDP/capita. Here, to simplify things, we assume that when mobility occurs across regions a representative segment or slice of the distribution of productivities moves and adds result to the distribution within the receiving region proportional to that distribution. We again remove migration barriers and calculate national inequality in the absence of Hukou restrictions. Significant efficiency impacts again occur but reductions in national inequality are smaller. While findings from these exercises are data and parameter sensitive, they nonetheless jointly point to significiant impacts from Hukou system in supporting growing overall relative inequality in China, and significant efficiency gains from its removal. They also show how economic modelling as well as statistical techniques can be used to analyze inequality change from doing refer in not only in China but also for the other countries.

This paper presents numerical simulation results on the impacts of the Hukou system of permanent registration on income inequality and labour migration in China. Our aim is to use numerical modelling to help assess the contribution of various policy and other factors in China in either contributing to or retarding inequality in China. We use three model variants to develop results. The base model is taken from Hamilton and Whalley (1984), who evaluated the impacts of cross country immigration restrictions on global inequality, and we examine four 2 region cases, a 3 region case, a 6 region case, and 31 province case in which alternative groupings and divisions in Chinese data are used. A second house model captures the effects of higher urban house prices in retarding rural labour movement in to urban areas. A final extension allows for productivity differences across individuals within each region in the model and explores income inequality impacts for five model cases. All model results point towards a significant role for the Hukou system in preventing movement of labour which moves the Chinese economy towards a more equal distribution of income. There effects are smaller in the second two model variants than in the first. We see all models as a simplification from a more complex reality, and so we do not aim to provide firm point estimates of impact. But the themes of results seem clear, and in addition we offer a simulation approach which can also be used for the analysis of mobility restrictions in other economies in ways different from existing econometric literature which focus on the determinants of mobility more than impacts on overall equality and efficiency.