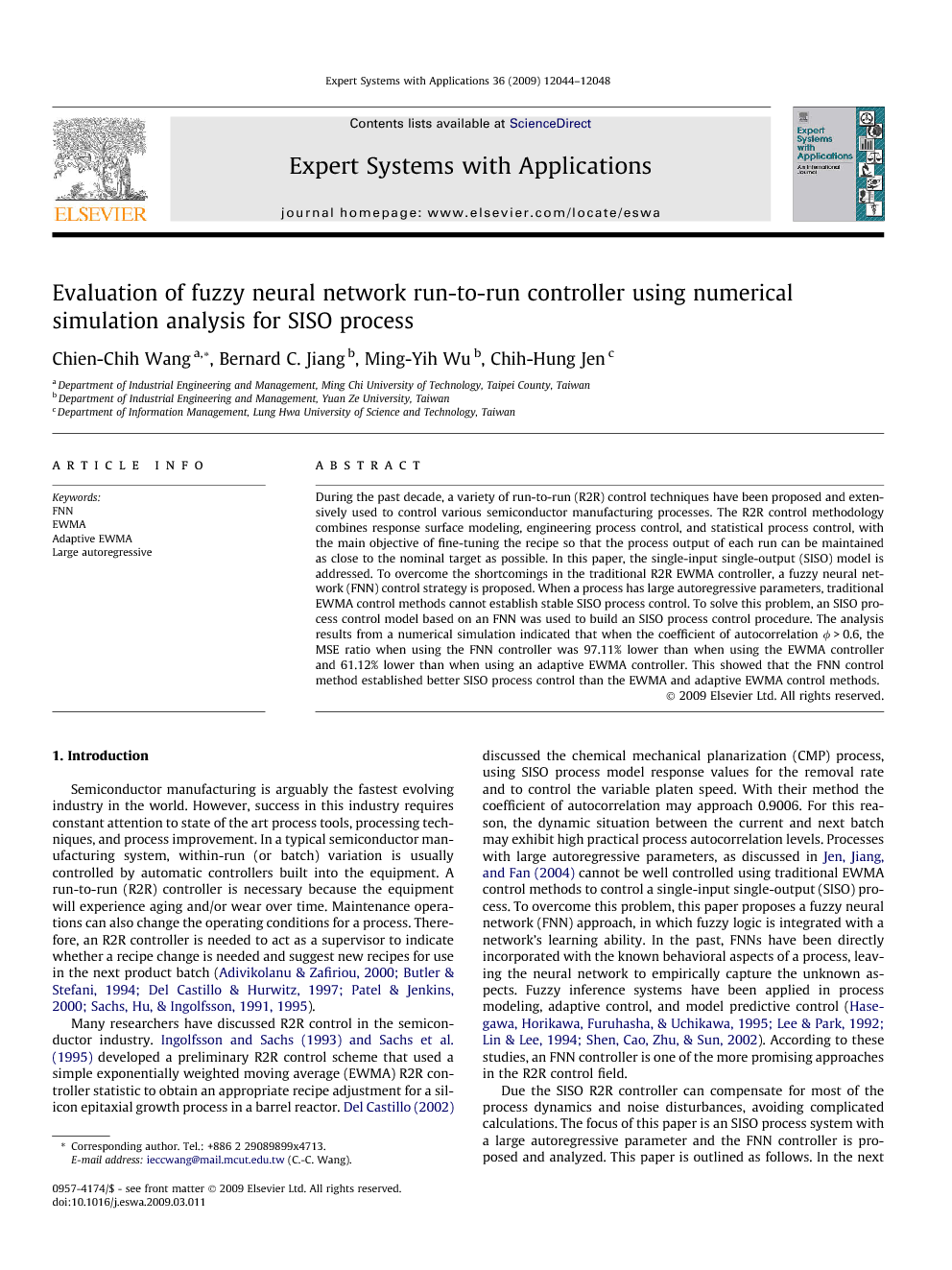 Semiconductor manufacturing is arguably the fastest evolving industry in the world. However, success in this industry requires constant attention to state of the art process tools, processing techniques, and process improvement. In a typical semiconductor manufacturing system, within-run (or batch) variation is usually controlled by automatic controllers built into the equipment. A run-to-run (R2R) controller is necessary because the equipment will experience aging and/or wear over time. Maintenance operations can also change the operating conditions for a process. Therefore, an R2R controller is needed to act as a supervisor to indicate whether a recipe change is needed and suggest new recipes for use in the next product batch (Adivikolanu and Zafiriou, 2000, Butler and Stefani, 1994, Del Castillo and Hurwitz, 1997, Patel and Jenkins, 2000, Sachs et al., 1991 and Sachs et al., 1995). Many researchers have discussed R2R control in the semiconductor industry. Ingolfsson and Sachs, 1993 and Sachs et al., 1995 developed a preliminary R2R control scheme that used a simple exponentially weighted moving average (EWMA) R2R controller statistic to obtain an appropriate recipe adjustment for a silicon epitaxial growth process in a barrel reactor. Del Castillo (2002) discussed the chemical mechanical planarization (CMP) process, using SISO process model response values for the removal rate and to control the variable platen speed. With their method the coefficient of autocorrelation may approach 0.9006. For this reason, the dynamic situation between the current and next batch may exhibit high practical process autocorrelation levels. Processes with large autoregressive parameters, as discussed in Jen, Jiang, and Fan (2004) cannot be well controlled using traditional EWMA control methods to control a single-input single-output (SISO) process. To overcome this problem, this paper proposes a fuzzy neural network (FNN) approach, in which fuzzy logic is integrated with a network’s learning ability. In the past, FNNs have been directly incorporated with the known behavioral aspects of a process, leaving the neural network to empirically capture the unknown aspects. Fuzzy inference systems have been applied in process modeling, adaptive control, and model predictive control (Hasegawa et al., 1995, Lee and Park, 1992, Lin and Lee, 1994 and Shen et al., 2002). According to these studies, an FNN controller is one of the more promising approaches in the R2R control field. Due the SISO R2R controller can compensate for most of the process dynamics and noise disturbances, avoiding complicated calculations. The focus of this paper is an SISO process system with a large autoregressive parameter and the FNN controller is proposed and analyzed. This paper is outlined as follows. In the next section, the structure and procedure of the FNN R2R controller will be introduced. In Section 3, a practical SISO model is simulated, and the control performance of the FNN controller is compared with other controllers. Section 4 concludes the paper and summarizes our findings.