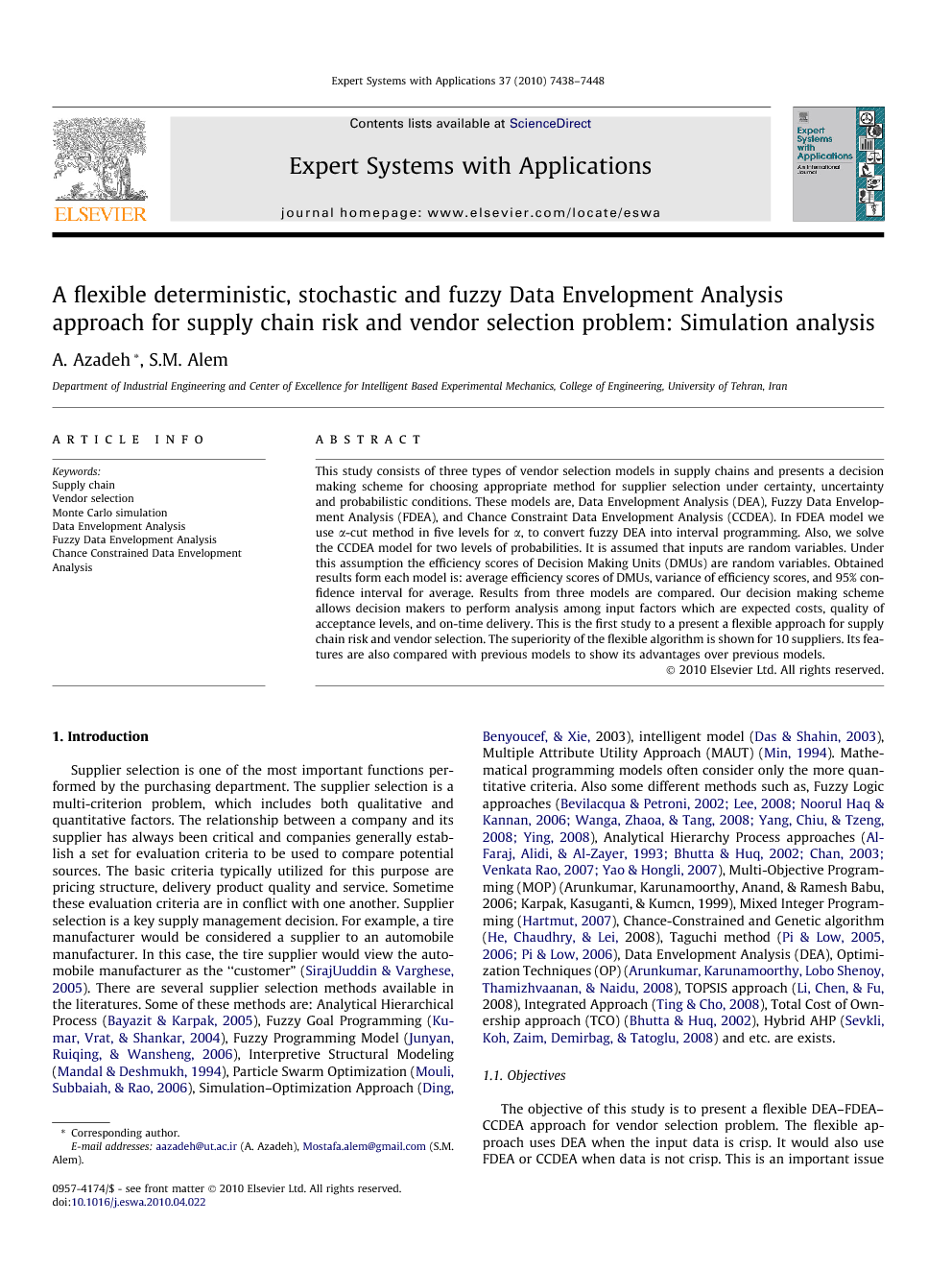 This study consists of three types of vendor selection models in supply chains and presents a decision making scheme for choosing appropriate method for supplier selection under certainty, uncertainty and probabilistic conditions. These models are, Data Envelopment Analysis (DEA), Fuzzy Data Envelopment Analysis (FDEA), and Chance Constraint Data Envelopment Analysis (CCDEA). In FDEA model we use α-cut method in five levels for α, to convert fuzzy DEA into interval programming. Also, we solve the CCDEA model for two levels of probabilities. It is assumed that inputs are random variables. Under this assumption the efficiency scores of Decision Making Units (DMUs) are random variables. Obtained results form each model is: average efficiency scores of DMUs, variance of efficiency scores, and 95% confidence interval for average. Results from three models are compared. Our decision making scheme allows decision makers to perform analysis among input factors which are expected costs, quality of acceptance levels, and on-time delivery. This is the first study to a present a flexible approach for supply chain risk and vendor selection. The superiority of the flexible algorithm is shown for 10 suppliers. Its features are also compared with previous models to show its advantages over previous models.

In this study, we presented a decision making flowchart to choose from DEA, FDEA and CCDEA for selection of best supplier under certainty, uncertainty and probabilistic conditions. It was further investigated the DEA, FDEA, and CCDEA models with inputs random for solve vendor selection problem. The DEA model is a model for determine the efficiency score of each DMU (supplier). In ordinary DEA model we deal with crisp data, but in the FDEA model we deal with inexact data. And in CCDEA model, constraints are probabilistic. Based on our decision making flowchart, when Data is crisp, and β = 1 we used DEA model, when Data is non-crisp we used FDEA model, and when Data is crisp and β ≠ 1 we used CCDEA model for supplier selection. A comparison of selected vendors resulted from the three approaches was demonstrated. Results from three models are consistent with each other with respect to the worst vendors. All three models demonstrated that V4, V5 and V6 are worst vendors. For future works we can combine the DEA, Fuzzy Logic, and Chance Constrained Programming method and establish the FCCDEA method for vendor selection. The FCCDEA model can be more useful for vendor selection problem in real world. Also, the effects of increasing inputs and outputs can be investigated. Moreover, the assumption of no similarity of inputs and outputs for each supplier may be analyzed. This is the first study to a present a flexible deterministic, stochastic and fuzzy approach for supply chain risk and vendor selection. The superiority of the flexible algorithm was shown for 10 suppliers. Its features are also compared with previous models to show its advantages over previous models (Table 16). As seen it dominates most existing models in integration mechanism (deterministic, probabilistic and fuzzy DEA). In addition, it dominates all recent studies except Wu & Olson (2008) in probabilistic data modeling. Finally, it is superior to Wu & Olson (2008) because it is capable of dealing with ambiguity (imposed by suppliers) and fuzzy data modeling.