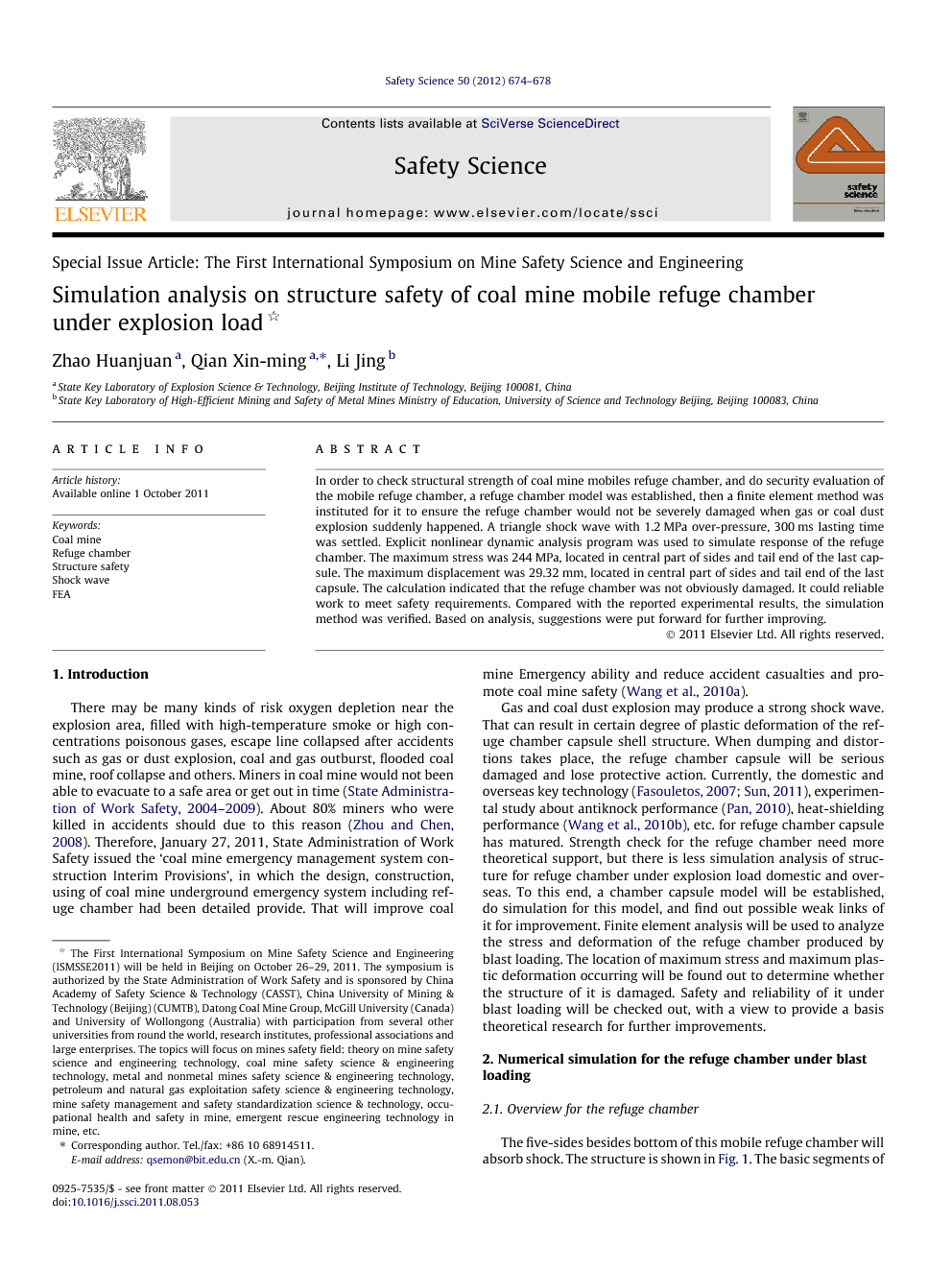 There may be many kinds of risk oxygen depletion near the explosion area, filled with high-temperature smoke or high concentrations poisonous gases, escape line collapsed after accidents such as gas or dust explosion, coal and gas outburst, flooded coal mine, roof collapse and others. Miners in coal mine would not been able to evacuate to a safe area or get out in time (State Administration of Work Safety, 2004–2009). About 80% miners who were killed in accidents should due to this reason (Zhou and Chen, 2008). Therefore, January 27, 2011, State Administration of Work Safety issued the ‘coal mine emergency management system construction Interim Provisions’, in which the design, construction, using of coal mine underground emergency system including refuge chamber had been detailed provide. That will improve coal mine Emergency ability and reduce accident casualties and promote coal mine safety (Wang et al., 2010a). Gas and coal dust explosion may produce a strong shock wave. That can result in certain degree of plastic deformation of the refuge chamber capsule shell structure. When dumping and distortions takes place, the refuge chamber capsule will be serious damaged and lose protective action. Currently, the domestic and overseas key technology (Fasouletos, 2007 and Sun, 2011), experimental study about antiknock performance (Pan, 2010), heat-shielding performance (Wang et al., 2010b), etc. for refuge chamber capsule has matured. Strength check for the refuge chamber need more theoretical support, but there is less simulation analysis of structure for refuge chamber under explosion load domestic and overseas. To this end, a chamber capsule model will be established, do simulation for this model, and find out possible weak links of it for improvement. Finite element analysis will be used to analyze the stress and deformation of the refuge chamber produced by blast loading. The location of maximum stress and maximum plastic deformation occurring will be found out to determine whether the structure of it is damaged. Safety and reliability of it under blast loading will be checked out, with a view to provide a basis theoretical research for further improvements.

Firstly, a refuge chamber model was established, and then a finite element method was instituted for the mobile refuge chamber. This explicit nonlinear dynamic analysis program was solved. After loaded shock wave and used lagrangian algorithm, displacement and strain changes results of the refuge chamber has been obtained. Compared with the reported experimental results, correct and effective quality of the simulation method that used finite element analysis method to simulate the refuge chamber response under blast loading has been verified. Then, a same blast loading was loaded on the five-sides besides the bottom side. The maximum pressure of the triangle shock wave is 1.2 MPa, the pulse width is 300 ms. The model met requirement when it was loaded on blast loading this wave, and was structurally intensity safe. Capsule and doors can satisfy the rigidity requirement. Capsule has not been damaged. Weak link are the central of capsule sides and tail end of the last capsule. Considering safety coefficient, it will be more safety when the maximum pressure of the triangle shock wave is 0.6 MPa. Finally, based on the numerical analysis, suggestions were put forward. The bolt connections could be increased. The proposed use of magnetic force or pressure to strengthen the door seal are suggested when cabin door and emergency door had been sealed through the baffle structure. A low alloy steel material is suggested to be used in cabin door and emergency door.