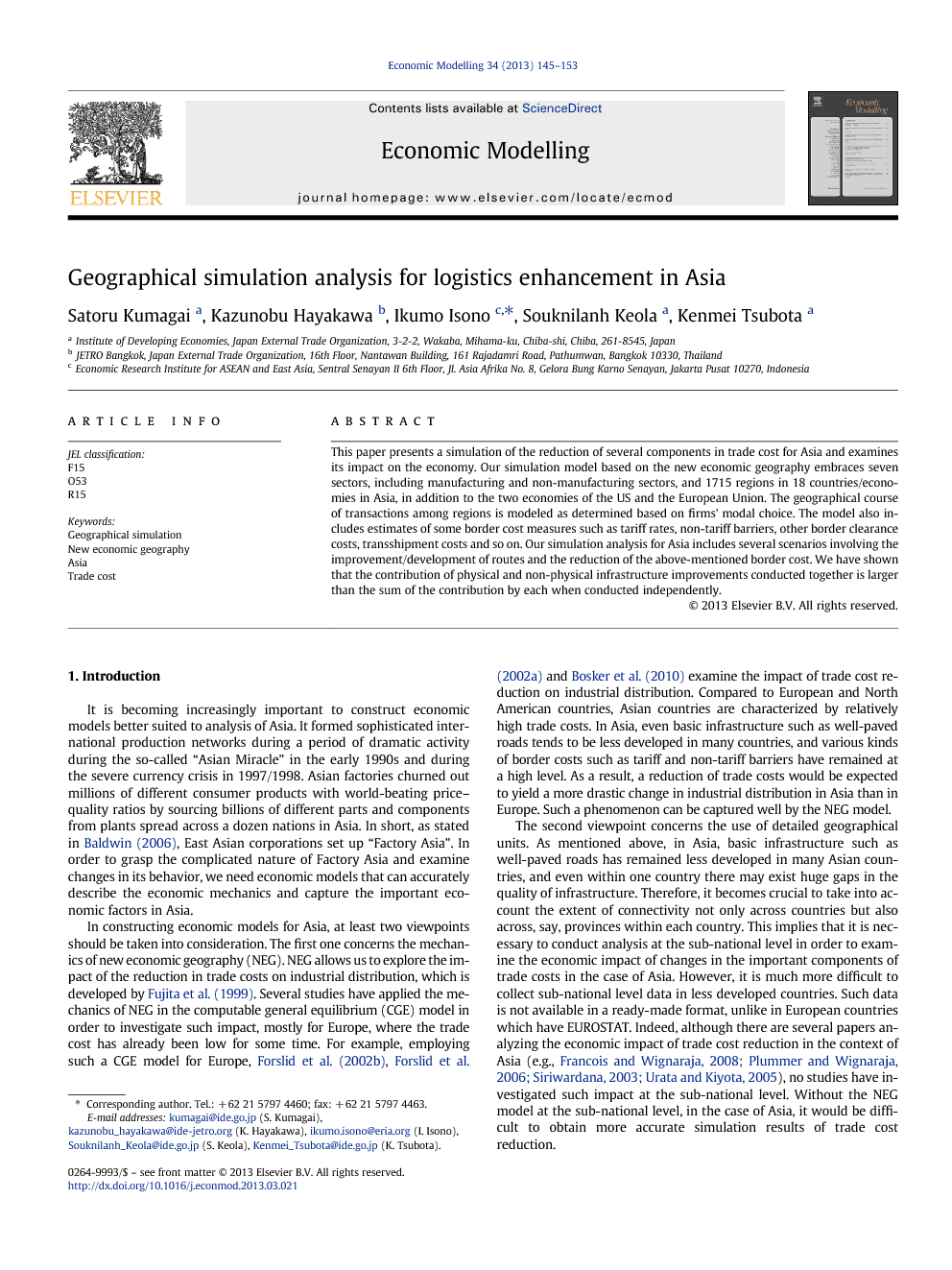 This paper presents a simulation of the reduction of several components in trade cost for Asia and examines its impact on the economy. Our simulation model based on the new economic geography embraces seven sectors, including manufacturing and non-manufacturing sectors, and 1715 regions in 18 countries/economies in Asia, in addition to the two economies of the US and the European Union. The geographical course of transactions among regions is modeled as determined based on firms' modal choice. The model also includes estimates of some border cost measures such as tariff rates, non-tariff barriers, other border clearance costs, transshipment costs and so on. Our simulation analysis for Asia includes several scenarios involving the improvement/development of routes and the reduction of the above-mentioned border cost. We have shown that the contribution of physical and non-physical infrastructure improvements conducted together is larger than the sum of the contribution by each when conducted independently.

It is becoming increasingly important to construct economic models better suited to analysis of Asia. It formed sophisticated international production networks during a period of dramatic activity during the so-called “Asian Miracle” in the early 1990s and during the severe currency crisis in 1997/1998. Asian factories churned out millions of different consumer products with world-beating price–quality ratios by sourcing billions of different parts and components from plants spread across a dozen nations in Asia. In short, as stated in Baldwin (2006), East Asian corporations set up “Factory Asia”. In order to grasp the complicated nature of Factory Asia and examine changes in its behavior, we need economic models that can accurately describe the economic mechanics and capture the important economic factors in Asia. In constructing economic models for Asia, at least two viewpoints should be taken into consideration. The first one concerns the mechanics of new economic geography (NEG). NEG allows us to explore the impact of the reduction in trade costs on industrial distribution, which is developed by Fujita et al. (1999). Several studies have applied the mechanics of NEG in the computable general equilibrium (CGE) model in order to investigate such impact, mostly for Europe, where the trade cost has already been low for some time. For example, employing such a CGE model for Europe, Forslid et al. (2002b), Forslid et al. (2002a) and Bosker et al. (2010) examine the impact of trade cost reduction on industrial distribution. Compared to European and North American countries, Asian countries are characterized by relatively high trade costs. In Asia, even basic infrastructure such as well-paved roads tends to be less developed in many countries, and various kinds of border costs such as tariff and non-tariff barriers have remained at a high level. As a result, a reduction of trade costs would be expected to yield a more drastic change in industrial distribution in Asia than in Europe. Such a phenomenon can be captured well by the NEG model. The second viewpoint concerns the use of detailed geographical units. As mentioned above, in Asia, basic infrastructure such as well-paved roads has remained less developed in many Asian countries, and even within one country there may exist huge gaps in the quality of infrastructure. Therefore, it becomes crucial to take into account the extent of connectivity not only across countries but also across, say, provinces within each country. This implies that it is necessary to conduct analysis at the sub-national level in order to examine the economic impact of changes in the important components of trade costs in the case of Asia. However, it is much more difficult to collect sub-national level data in less developed countries. Such data is not available in a ready-made format, unlike in European countries which have EUROSTAT. Indeed, although there are several papers analyzing the economic impact of trade cost reduction in the context of Asia (e.g., Francois and Wignaraja, 2008, Plummer and Wignaraja, 2006, Siriwardana, 2003 and Urata and Kiyota, 2005), no studies have investigated such impact at the sub-national level. Without the NEG model at the sub-national level, in the case of Asia, it would be difficult to obtain more accurate simulation results of trade cost reduction. The purpose of this paper is to illustrate the impact of trade cost reduction on the Asian economy by employing a sub-national level model based on NEG. Our model comprises seven sectors, including manufacturing and non-manufacturing sectors, and 1715 regions in 18 countries/economies in Asia in addition to the two economies of the US and the European Union. The Asian countries/economies are Bangladesh, Brunei Darussalam, Cambodia, China, Hong Kong, India, Indonesia, Japan, Korea, Lao PDR, Macao, Myanmar, Malaysia, Philippines, Singapore, Taiwan, Thailand and Vietnam. In addition, the currently available routes consisting of highways, railways, sea shipment and air shipment are incorporated in our model. The geographical route of transactions among regions is determined by firms' modal choice which reflects the type of goods. The model also includes estimates of some border cost measures such as tariff rates, non-tariff barriers, other border clearance costs, transshipment costs and so on. Thus, our simulation model is a comprehensive one for examining the impact of broadly-defined trade costs. By applying the sub-national level data, which is drawn from various kinds of data sources including unpublished ones, to this model, we examine several scenarios involving the improvement/development of transport routes and the reduction of the above-mentioned border cost. The remainder of this paper is organized as follows. In Section 2, the simulation model is presented. In Section 3, we provide our data sources and parameter values used in the simulation model. Section 4 explains our simulation procedures, and then the results of our simulation for the reduction of transport costs are presented in Section 5. Finally, we conclude this paper in Section 6.

Our analysis adds realistic geography to the NEG model and generates policy implications for further regional integration in Asia. As a result, our simulation model reveals the future economic geography of Asia. While physical infrastructure improvements are expected to have a drastic impact on the distribution of economic activities, we found that the positive effects of physical transport infrastructure improvements are rather limited to the neighboring regions of the projects and that the existing concentrations of economic activities are rather persistent. Furthermore, we also find that, besides the ongoing physical transport infrastructure improvements, further trade facilitation or tackling behind-the-border issues among countries could enhance the prevalence of economic growth in each country.