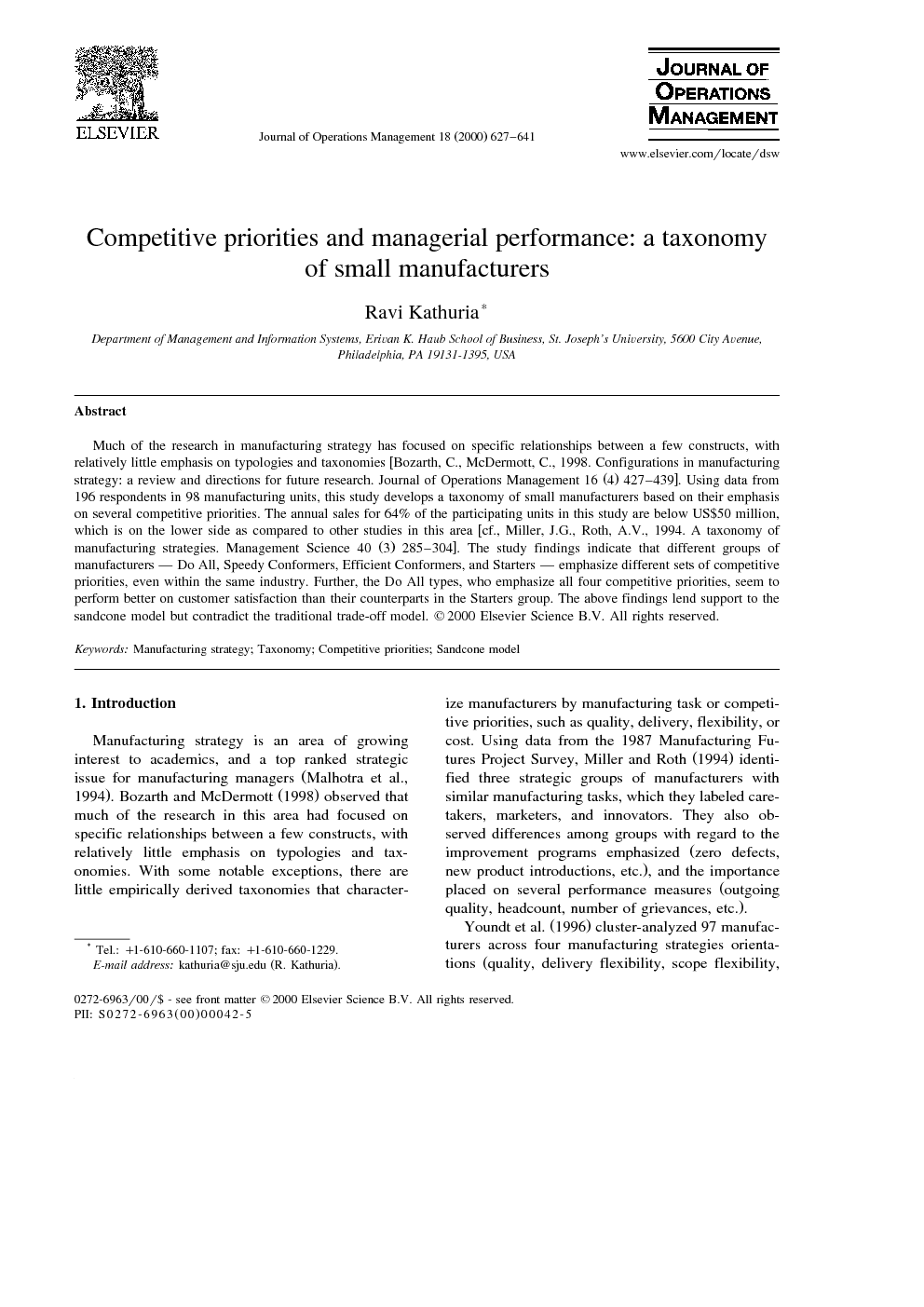 Much of the research in manufacturing strategy has focused on specific relationships between a few constructs, with relatively little emphasis on typologies and taxonomies [Bozarth, C., McDermott, C., 1998. Configurations in manufacturing strategy: a review and directions for future research. Journal of Operations Management 16 (4) 427–439]. Using data from 196 respondents in 98 manufacturing units, this study develops a taxonomy of small manufacturers based on their emphasis on several competitive priorities. The annual sales for 64% of the participating units in this study are below US$50 million, which is on the lower side as compared to other studies in this area [cf., Miller, J.G., Roth, A.V., 1994. A taxonomy of manufacturing strategies. Management Science 40 (3) 285–304]. The study findings indicate that different groups of manufacturers — Do All, Speedy Conformers, Efficient Conformers, and Starters — emphasize different sets of competitive priorities, even within the same industry. Further, the Do All types, who emphasize all four competitive priorities, seem to perform better on customer satisfaction than their counterparts in the Starters group. The above findings lend support to the sandcone model but contradict the traditional trade-off model.

Manufacturing strategy is an area of growing interest to academics, and a top ranked strategic issue for manufacturing managers (Malhotra et al., 1994). Bozarth and McDermott (1998) observed that much of the research in this area had focused on specific relationships between a few constructs, with relatively little emphasis on typologies and taxonomies. With some notable exceptions, there are little empirically derived taxonomies that characterize manufacturers by manufacturing task or competitive priorities, such as quality, delivery, flexibility, or cost. Using data from the 1987 Manufacturing Futures Project Survey, Miller and Roth (1994) identified three strategic groups of manufacturers with similar manufacturing tasks, which they labeled caretakers, marketers, and innovators. They also observed differences among groups with regard to the improvement programs emphasized (zero defects, new product introductions, etc.), and the importance placed on several performance measures (outgoing quality, headcount, number of grievances, etc.). Youndt et al. (1996) cluster-analyzed 97 manufacturers across four manufacturing strategies orientations (quality, delivery flexibility, scope flexibility, and cost), while examining the moderating effect of different manufacturing strategies on the human resource systems–performance relationship. Though their main objective was not to develop or test any taxonomy of manufacturing strategy, their findings have a bearing on this research stream. Their analysis yielded five groups of manufacturers, which they labeled by the emphasis on corresponding manufacturing strategies, as follows: (1) quality emphasis, (2) cost and quality emphasis, (3) cost, quality, delivery flexibility and scope flexibility emphasis, (4) quality and delivery flexibility emphasis, and (5) no strategic emphasis (p. 855). They, however, did not find these strategy clusters to have any direct impact on manufacturing performance as captured by self-reported measures of product quality, employee productivity, on-time delivery, equipment utilization, etc. The lack of performance differences among clusters in the Youndt et al. (1996) study could be explained using the equifinality argument that different organizations could pursue different strategies and be equally effective Van de Ven and Drazin, 1985 and Bozarth and McDermott, 1998. Further, the findings of Youndt et al. (1996) and Miller and Roth (1994) are not directly comparable since, among other things, the former examined the relationship between cluster membership and a unit's performance, whereas the latter examined the relationship between cluster membership and the perceived importance of various competitive dimensions. The findings of the two studies, however, are conflicting enough to warrant further investigation. This study is a step in that direction.

This study developed a taxonomy based on the content of manufacturing strategy, i.e., competitive priorities. Analysis reveals that different groups of manufacturers emphasize different sets of competitive priorities. Among relatively small manufacturers, the focus of this study, Speedy Conformers are the biggest group with 41% constituents, who emphasize delivery and quality. The Efficient Conformers, 11% of the sample, place a higher emphasis on cost and quality than the other two priorities. The “Do All” are not many, 15%, and they place a very high emphasis on all four competitive priorities — quality, delivery, flexibility, and cost. There are several Starters, 33%, who seem to be focusing on quality more than any other priority. The Starters' emphasis on quality is, however, the lowest among all four groups, which also raises the possibility that this group might focus on some other non-manufacturing priorities not included in the study. Further, they do not surpass any group in terms of emphasis on any competitive priority. It is also interesting to note that the four types of manufacturers exist in most all industries covered in the sample, which suggests that different manufacturers use different basis to compete within the same industry. More interesting is the fact that the Do All type, who emphasize all four competitive priorities, also satisfy their customers better than their counterparts in the Starters group. This finding is contrary to the belief of some researchers, including Skinner (1969), who would argue that the Do All companies could not perform well. The existence of the Do All types, on the other hand, is consistent with the observations of Nakane (1986) and Ferdows and De Meyer (1990), who believed that the four competitive capabilities could be simultaneously emphasized and enhanced. Further, based on within group performance analysis, different groups of manufacturers seem to perform better on certain performance measures that are consistent with their focus. For example, the Speedy Conformers are perceived better on timeliness in meeting customer delivery schedules, accuracy, and quality of work than on their efficiency and productivity. Efficient Conformers, on the other hand, are doing better on quantity of work than timeliness in meeting customer schedules. The Starters, with their focus on quality, are doing better on accuracy and quality than on efficiency. This finding is consistent with the literature that suggests a correspondence between performance measures and the manufacturing priorities emphasized Richardson et al., 1985, Roth, 1989 and Nemetz, 1990. It is also possible that the above within and between group differences could be related to both Nakane's (1986) notion of how manufacturing progresses through various competitive priorities and Ferdows and De Meyer's (1990) sandcone model. For example, the Starters seem to have a light emphasis on all priorities that might show how dividing attention between the priorities diminishes the impact on certain performance measures. This group is the lowest performer on customer satisfaction. The Do All cluster also emphasizes all priorities, but places a relatively high emphasis on all four. These manufacturing units may have progressed through the sandcone, and are able to simultaneously emphasize and enhance all four priorities. Speedy Conformers place a higher emphasis on quality and delivery as compared to cost. This group appears to be building up the sandcone. The Efficient Conformers, who place a higher emphasis on quality and cost, might be taking a low cost strategy after having progressed on quality and, perhaps, may follow a different sandcone model than that of Ferdows and De Meyer (1990) and Nakane (1986). The present study, in some respects, also builds on Miller and Roth (1994) and Noble (1995). Though Noble (1995) tested the cumulative model in a multiple country context using data collected between 1984 and 1987, the findings of the three studies bear some similarities. First, all three studies found multiple groups of manufacturers that have different competitive orientation, with Noble's North American sample being least supportive of all. Second, all three studies found a correspondence between performance measures and the manufacturing priorities emphasized. Despite the similarities noted above, this study is different from Miller and Roth (1994) and Noble (1995). First, it focuses on relatively smaller American manufacturers, which have been mostly neglected in manufacturing strategy research. The annual sales for 50% of Miller and Roth's sample was above US$200 million, whereas 64% of manufacturers in this study were below US$50 million. Noble's North American sample included Fortune 500 plants though average annual sales for the sample were not reported. Second, the present study uses only the manufacturing competitive priorities with multiple items used for operationalizing each. The other two studies used a combination of manufacturing and marketing capabilities, with Miller and Roth using single-item measures to operationalize them. Third, the variables used in this study are obtained from two levels of respondents in each participating unit — the emphasis on competitive priorities from manufacturing managers, and the managerial performance from their superiors, general managers. The other studies used one respondent for all of the data gathered from each firm or plant, and suggested that future research should attempt to use multiple sources. Finally, this study examined how different groups perform on various measures, as opposed to the importance attached to various measures in Miller and Roth's work. Noble (1995), who found clusters emphasizing multiple priorities, used fewer performance measures — labor productivity and relative productivity only. The present study used seven measures of managerial performance. Despite the strengths of this study, it is not free from limitations that should be addressed in future studies. First, the cross-sectional data used in the study precludes any causal links between competitive priorities emphasized and perceived performance. In future, a longitudinal study might help in investigating the causal relationship between the variables. Second, two of the four scales used in the study had low α's, which suggest the need for developing more reliable measures for the two scales — flexibility and delivery. Further research should examine if service organizations would endure a similar taxonomy, given the differences between manufacturing and services.