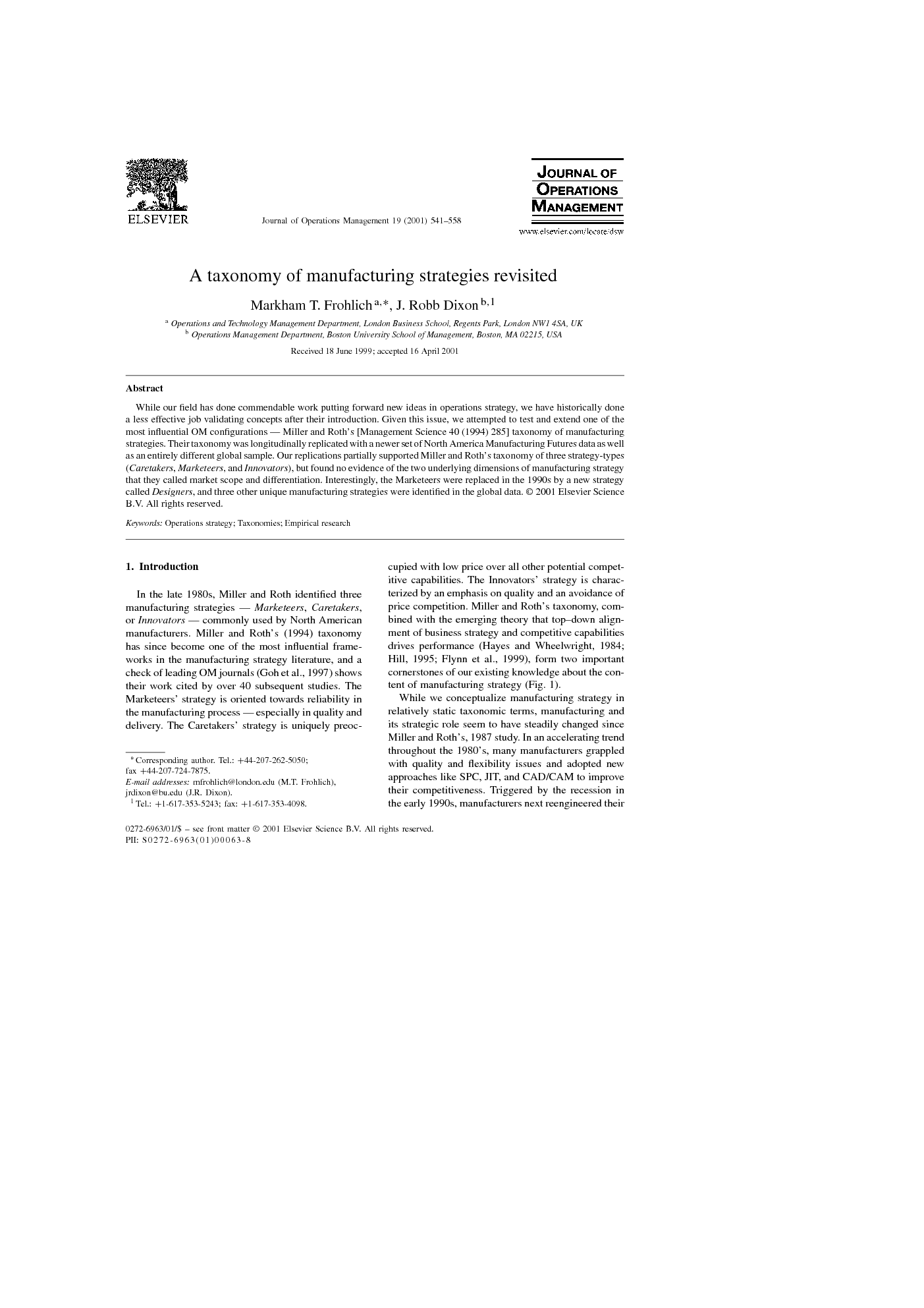 While our field has done commendable work putting forward new ideas in operations strategy, we have historically done a less effective job validating concepts after their introduction. Given this issue, we attempted to test and extend one of the most influential OM configurations — Miller and Roth’s [Management Science 40 (1994) 285] taxonomy of manufacturing strategies. Their taxonomy was longitudinally replicated with a newer set of North America Manufacturing Futures data as well as an entirely different global sample. Our replications partially supported Miller and Roth’s taxonomy of three strategy-types (Caretakers, Marketeers, and Innovators), but found no evidence of the two underlying dimensions of manufacturing strategy that they called market scope and differentiation. Interestingly, the Marketeers were replaced in the 1990s by a new strategy called Designers, and three other unique manufacturing strategies were identified in the global data.

In the late 1980s, Miller and Roth identified three manufacturing strategies — Marketeers, Caretakers, or Innovators — commonly used by North American manufacturers. Miller and Roth’s (1994) taxonomy has since become one of the most influential frameworks in the manufacturing strategy literature, and a check of leading OM journals (Goh et al., 1997) shows their work cited by over 40 subsequent studies. The Marketeers’ strategy is oriented towards reliability in the manufacturing process — especially in quality and delivery. The Caretakers’ strategy is uniquely preoccupied with low price over all other potential competitive capabilities. The Innovators’ strategy is characterized by an emphasis on quality and an avoidance of price competition. Miller and Roth’s taxonomy, combined with the emerging theory that top–down alignment of business strategy and competitive capabilities drives performance ( Hayes and Wheelwright, 1984, Hill, 1995 and Flynn et al., 1999), form two important cornerstones of our existing knowledge about the content of manufacturing strategy (Fig. 1).While we conceptualize manufacturing strategy in relatively static taxonomic terms, manufacturing and its strategic role seem to have steadily changed since Miller and Roth’s, 1987 study. In an accelerating trend throughout the 1980’s, many manufacturers grappled with quality and flexibility issues and adopted new approaches like SPC, JIT, and CAD/CAM to improve their competitiveness. Triggered by the recession in the early 1990s, manufacturers next reengineered their business processes and implemented ERP systems in an attempt to reduce costs and improve service. Beginning in the mid-1990s, growing global competition and a booming economy led many manufacturers to focus on improved delivery in their supply chains as well as price, new product development, and service. It has even led many formerly outstanding manufacturers to rely on outsourcing, thereby abandoning their own operations. There also seem to be some underlying differences, perhaps due to national culture, between manufacturers in various regions of the emerging global economy. These issues all raise important questions concerning our present knowledge about manufacturing strategy. Is Miller and Roth’s taxonomy still applicable in today’s dynamic global manufacturing environment? If not, is their taxonomy baseless, or can new findings update their model into a more robust framework?