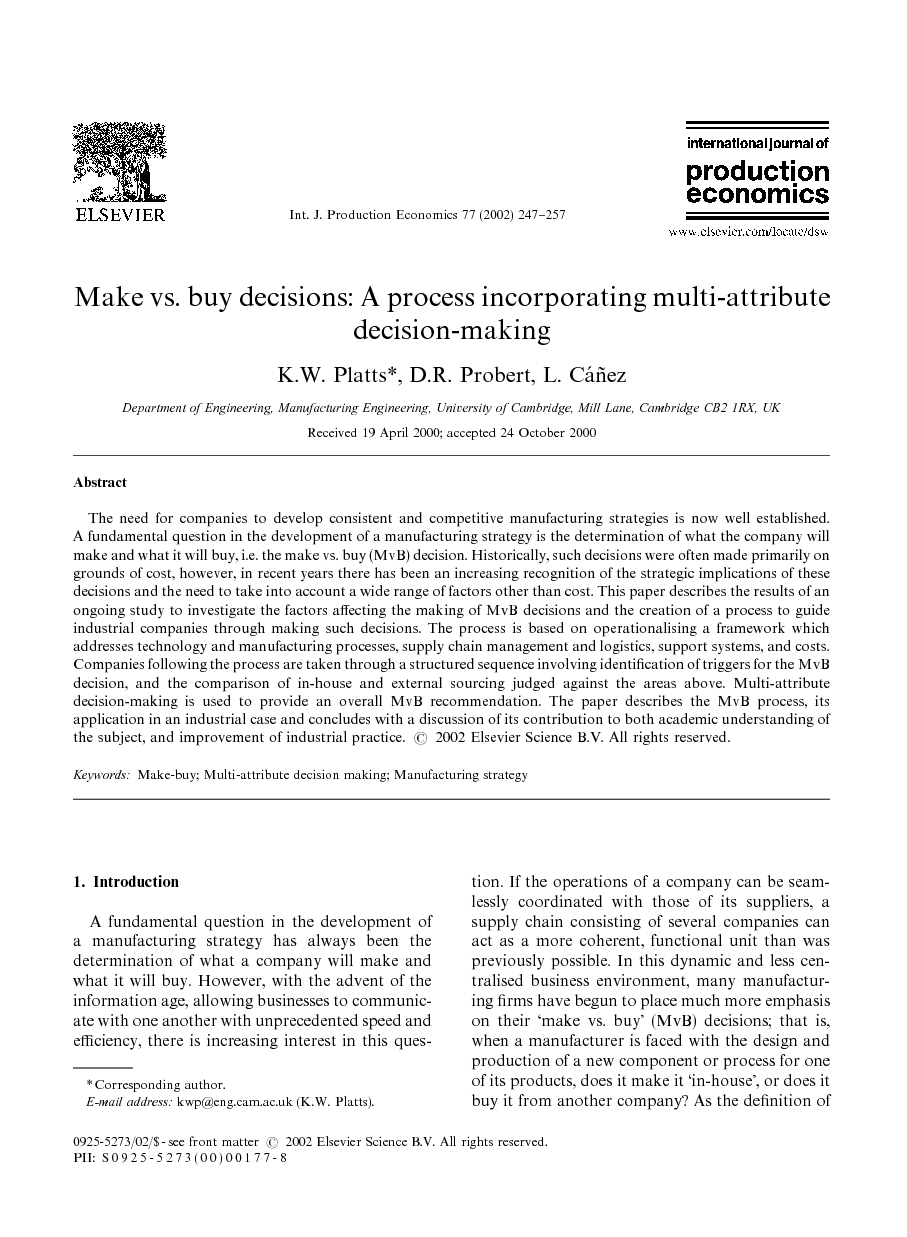 The need for companies to develop consistent and competitive manufacturing strategies is now well established. A fundamental question in the development of a manufacturing strategy is the determination of what the company will make and what it will buy, i.e. the make vs. buy (MvB) decision. Historically, such decisions were often made primarily on grounds of cost, however, in recent years there has been an increasing recognition of the strategic implications of these decisions and the need to take into account a wide range of factors other than cost. This paper describes the results of an ongoing study to investigate the factors affecting the making of MvB decisions and the creation of a process to guide industrial companies through making such decisions. The process is based on operationalising a framework which addresses technology and manufacturing processes, supply chain management and logistics, support systems, and costs. Companies following the process are taken through a structured sequence involving identification of triggers for the MvB decision, and the comparison of in-house and external sourcing judged against the areas above. Multi-attribute decision-making is used to provide an overall MvB recommendation. The paper describes the MvB process, its application in an industrial case and concludes with a discussion of its contribution to both academic understanding of the subject, and improvement of industrial practice.

A fundamental question in the development of a manufacturing strategy has always been the determination of what a company will make and what it will buy. However, with the advent of the information age, allowing businesses to communicate with one another with unprecedented speed and efficiency, there is increasing interest in this question. If the operations of a company can be seamlessly coordinated with those of its suppliers, a supply chain consisting of several companies can act as a more coherent, functional unit than was previously possible. In this dynamic and less centralised business environment, many manufacturing firms have begun to place much more emphasis on their ‘make vs. buy’ (MvB) decisions; that is, when a manufacturer is faced with the design and production of a new component or process for one of its products, does it make it ‘in-house’, or does it buy it from another company? As the definition of the firm expands to include other, strategically linked suppliers, the MvB process will become even more critical to the success of a company. A key research question is whether this decision process can be carried out systematically and analytically, or is it, as many claim, simply too case-specific to use a structured methodology? This paper reports on the development of a structured methodology for addressing the MvB questions and reports on its application within a manufacturing company. The traditional approaches to questions of MvB have been based on financial and economic criteria – can another company provide a component or process for less money than is possible in-house? Coarse [1] recognised that it is not simply the price being charged in the market that needs to be taken into account, but all the costs of acquiring the commodity or process. This became established as transaction cost economics and the concepts were developed further by Commons [2] who considered the transaction as the basic unit in organisational theory, and by Williamson [3] who explored the complexity of transaction costs. There is now a sizeable repertoire of additional analytical tools aiming to answer the MvB question on a purely economic level [4], [5], [6], [7] and [8]. However, to look exclusively at the cost aspects of the MvB decision is somewhat myopic; there are several other important issues that need to be addressed. This has been recognised for many years. Ford and Porter [9] stated that “…many other considerations other than price enter into the equation…”. An early study by Culliton [10] examined the industrial practice of that time, and found quality and quantity issues to be important. He also made the significant observation that the appropriate MvB decision depended on the current economic, social and political climate. There are also significant strategic issues behind most MvB decisions [11], [12] and [13]. For example, it is important to consider the present and potential technological capabilities of the firm. Is the company even capable, either now or in the future, of making the component in-house? One cannot gauge a firm's outsourcing possibilities without looking at how a particular decision will affect the strategies of its competitors. Much work has been done by workers in supply chain management in identifying issues around the MvB decision. Notable among these are Quinn and Hilmer [21], Buckowicz [22] and Ford and Farmer [14] who recognise that the MvB decision requires multiple inputs and call for a structured strategic approach. Previous work at Cambridge by the researchers has helped firms pull together the different aspects of MvB decisions, using a methodical approach which pivots on three separate decision tools: a technology matrix, a cost model, and a strategic framework [15]. This model greatly reduces the number of variables that one needs to juggle when deciding whether or not to outsource a product or process. However, the model is somewhat incomplete in that it does not directly answer the original question: ‘Should the firm make the part or buy it?’ A manager has to make a decision by considering the outcomes of three disjointed analytical tools. The aim of the current work was to bring all these aspects together in a single model that could be used in decision-making.

A process for making structured make vs. buy decisions has been developed. The testing case has shown this to be feasible, practicable, and useful. Further testing is currently in progress in order to: • Improve the clarity of how the process stages fit together. • Investigate the wider applicability of the process. • Explore further the weighting elicitation systems tested in this case. • Simplify the rating definitions to make them more clear. • Develop further the costing exercise. • Improve the spreadsheet macro to make it more user friendly. A longer-term activity will be to use different facilitators to guide the process, to ensure that there is no implicit knowledge held by the current facilitator, and to assess the wider applicability of the process.