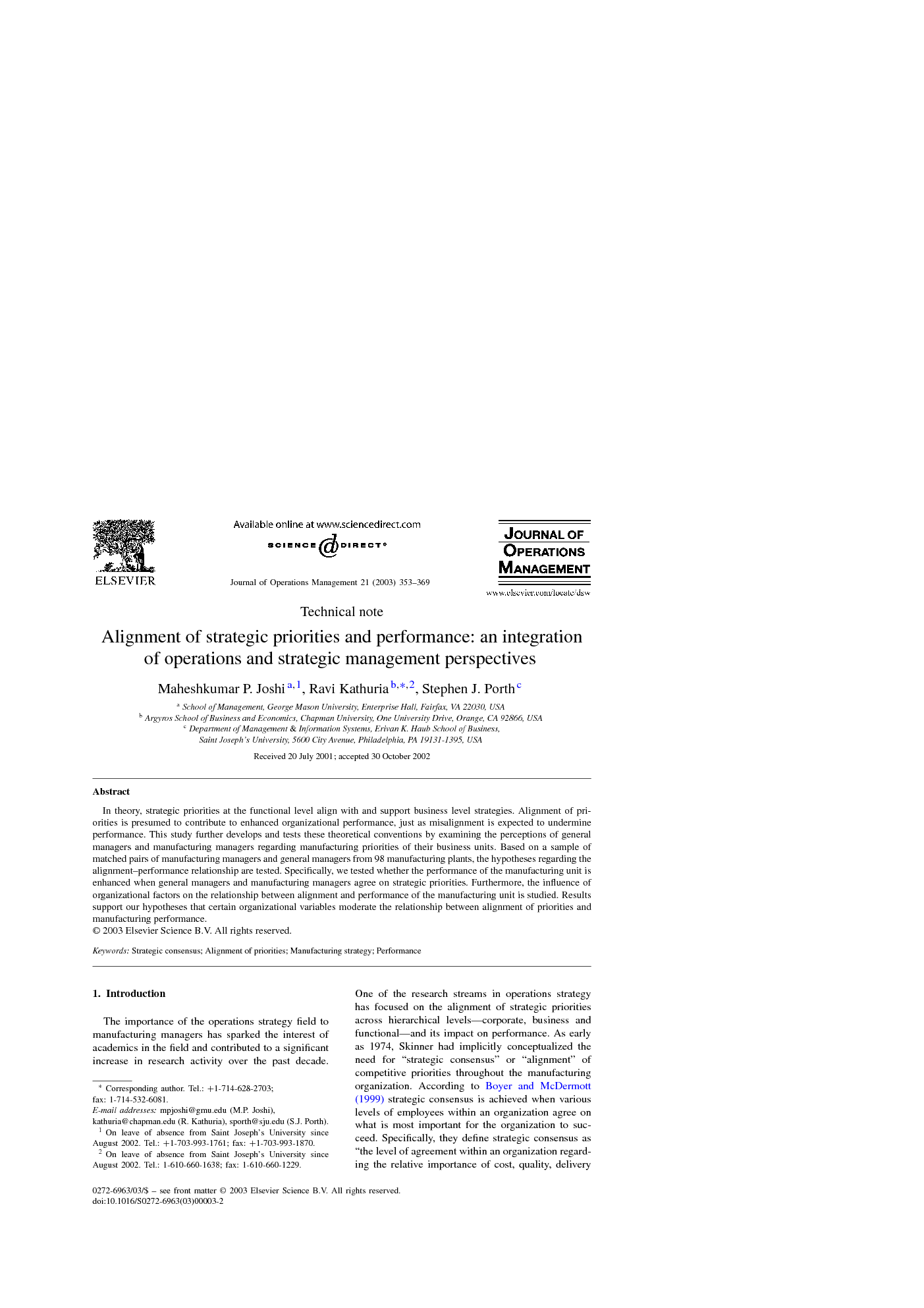 This study has attempted to address the relationship between alignment of MM and GM manufacturing priorities and performance of the manufacturing unit. Based on a sample of manufacturing firms from several industries, the study revealed no direct relationship between alignment of manufacturing priorities and performance of the unit. Considering the findings of West and Schwenk (1996), Homburg et al. (1999) and Lindman et al. (2001), our finding is not entirely surprising. For example, Lindman et al. (2001) did not find consensus among managers on the firm’s business-level strategy to influence manufacturing performance. Homburg et al. (1999) also did not find support for the alignment–performance relationship in the case of a cost leadership strategy for any of their three performance dimensions. Similarly, West and Schwenk (1996) found no significant relationship between consensus among top management teams and any of the three performance measures. All of the above studies including ours, however, found alignment or strategic consensus to influence performance indirectly, either through a mediating variable (Lindman et al., 2001) or in the presence of some moderating variables. We were able to isolate the moderating effects of some organizational variables on the alignment–performance relationship. First, when the GM and MM have little history of association, and when the organizational tenure of the MM is negligible, there is a significant positive relationship between performance and alignment. Furthermore, regarding the interaction effect of organizational tenure and alignment on performance, at all levels of Years of Association (Fig. 3, Table 4) we find that for low levels of Organizational Tenure (less than 10 years) alignment and performance are positively related. The above findings when viewed in light of the contingency theory make sense. When we first analyze the entire heterogeneous sample of manufacturing units and their managers, we find no significant relationship between the two variables—alignment and performance. Later, when we introduce contingency variables and split the sample into homogeneous groups based on Organizational Tenure and years of association, we uncover some significant relationships that would otherwise lay beneath the surface in a larger heterogeneous sample. The findings of this study have significant implications for both academics and practitioners. From a managerial perspective it is important to know that alignment pays off under certain conditions. As we observed in this study, alignment is especially critical when the employees are relatively new to the organization. Other contextual variables that have been found to affect the alignment–performance relationship include the type of business environment (Homburg et al., 1999), human capital in the form of prestige of partners and tacit knowledge gained through experience (Hitt et al., 2001), among others. From a research perspective, this study underscores the importance of contingency variables. Strategic management researchers (Powell, 1994) have already observed that neglecting contingency variables may increase the risk of both types I and II error. Operations management research, especially in the operations strategy area, needs to incorporate contingency variables to unravel true underlying relationships. For example, in this study, if we did not include contingency variables and simply reported no significant relationship between alignment and performance, when the relationship actually exists within certain homogeneous groups, we would have made a type II error by not detecting the ‘true’ underlying relationship. On the other hand, studies that neglect contingency variables and find significant direct relationships may, in fact, report a spurious relationship, having increased the risk of a type I error by rejecting a ‘true’ null hypothesis. Future research should be directed at examining the influence of other moderating variables, such as functional backgrounds of managers and organizational culture, on the alignment–performance relationship. Future studies may also want to examine the moderating effects of differences in the hierarchical levels of paired-respondents on the alignment–performance relationship. This study examined the influence of only organizational variables as moderating factors, while previous studies (Homburg et al., 1999) used environmental variables as moderators. Future studies should attempt to simultaneously capture both organizational and external variables in one model. While we found consistent results with composite, as well as segregated measures of alignment based on competitive priorities and performance, some constructs, such as Cost and Quality-of-Design, may need further refinement. For the Quality-of-Design scale especially, future research should refrain from the use of “double-barreled” questions such as “manufacturing durable and reliable products”, and “meeting and exceeding customer needs and preferences”. Future researchers should split each such question into two. Measures of manufacturing performance used in this study are based on the perception of the GM to whom the MM reports. While objective and financial measures of performance are preferred in the strategy literature, given our focus on functional (i.e. manufacturing) performance, we have argued for the appropriateness of perceptual measures. Future studies of the interface between business and manufacturing strategy might extend this study by incorporating more objective measures of manufacturing performance, such as efficiency metrics, on-time delivery results, and results of customer satisfaction surveys. Though the sample in the study represents several industries, it is dominated by smaller firms. We recommend that managers use caution in generalizing the findings of this study to larger firms, which could be included in future research endeavors.