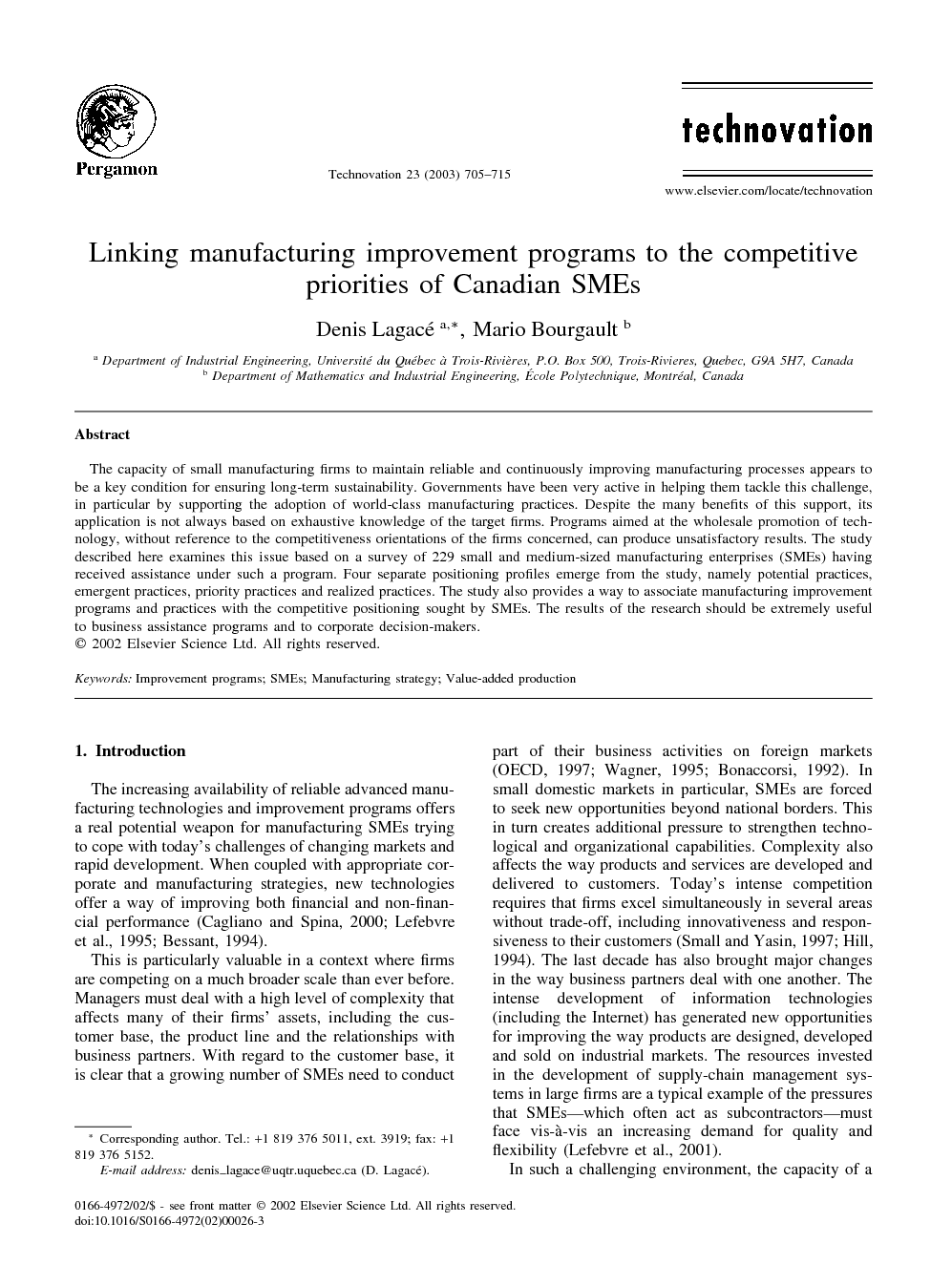 The capacity of small manufacturing firms to maintain reliable and continuously improving manufacturing processes appears to be a key condition for ensuring long-term sustainability. Governments have been very active in helping them tackle this challenge, in particular by supporting the adoption of world-class manufacturing practices. Despite the many benefits of this support, its application is not always based on exhaustive knowledge of the target firms. Programs aimed at the wholesale promotion of technology, without reference to the competitiveness orientations of the firms concerned, can produce unsatisfactory results. The study described here examines this issue based on a survey of 229 small and medium-sized manufacturing enterprises (SMEs) having received assistance under such a program. Four separate positioning profiles emerge from the study, namely potential practices, emergent practices, priority practices and realized practices. The study also provides a way to associate manufacturing improvement programs and practices with the competitive positioning sought by SMEs. The results of the research should be extremely useful to business assistance programs and to corporate decision-makers.

The increasing availability of reliable advanced manufacturing technologies and improvement programs offers a real potential weapon for manufacturing SMEs trying to cope with today’s challenges of changing markets and rapid development. When coupled with appropriate corporate and manufacturing strategies, new technologies offer a way of improving both financial and non-financial performance (Cagliano and Spina, 2000, Lefebvre et al., 1995 and Bessant, 1994). This is particularly valuable in a context where firms are competing on a much broader scale than ever before. Managers must deal with a high level of complexity that affects many of their firms’ assets, including the customer base, the product line and the relationships with business partners. With regard to the customer base, it is clear that a growing number of SMEs need to conduct part of their business activities on foreign markets (OECD, 1997, Wagner, 1995 and Bonaccorsi, 1992. In small domestic markets in particular, SMEs are forced to seek new opportunities beyond national borders. This in turn creates additional pressure to strengthen technological and organizational capabilities. Complexity also affects the way products and services are developed and delivered to customers. Today’s intense competition requires that firms excel simultaneously in several areas without trade-off, including innovativeness and responsiveness to their customers (Small and Yasin, 1997 and Hill, 1994). The last decade has also brought major changes in the way business partners deal with one another. The intense development of information technologies (including the Internet) has generated new opportunities for improving the way products are designed, developed and sold on industrial markets. The resources invested in the development of supply-chain management systems in large firms are a typical example of the pressures that SMEs—which often act as subcontractors—must face vis-à-vis an increasing demand for quality and flexibility (Lefebvre et al., 2001). In such a challenging environment, the capacity of a firm to maintain reliable and continuously improving business and manufacturing processes appears to be a key condition for ensuring its sustainability in the long run. Over the years, many SMEs have chosen to embark on a renewal of production technologies as well as improvement programs that have yielded positive results in larger firms (e.g. ISO standards). Although the adoption rate of such practices seems to be reasonably high among SMEs (Swamidass, 1995), empirical evidence has also shown that the mere fact of adopting technologies and improvement programs does not guarantee immediate benefits or immediate performance improvements. Several empirical studies indicate that while most firms do obtain some benefits (De Meyer and Ferdows, 1990, Bartezzaghi and Spina, 1998 and Boyer, 1998, some implementation projects do not lead to full exploitation of the system’s capabilities (Boyer et al., 1997 and Small and Yasin, 1997). In many cases, too much focus on a few specific and well-publicized improvement techniques such as JIT and TQM is both inadequate and ineffective. A ‘pick and choose’ strategy such as this may have a lesser impact than a more systematic approach combining technology and organizational characteristics. Research has shown that improvement programs will not generate tangible and positive results unless they are clearly in line with the firm’s strategic orientations (Gilgeous and Gilgeous, 1999 and Allen, 2000). The aim of the paper is to shed some light on these issues by proposing an original way of linking manufacturing improvement programs and practices to strategic orientations of small and medium-sized firms. This study has been conducted in the context of a Canadian province where lots of efforts have been invested, over the years, by the government agencies in the promotion of an integrated approach, aimed at improving the manufacturing competitiveness of these firms. More specifically, this government’s approach was designed to get manufacturing firms to increase the value of their production by specifically seeking three direct manufacturing improvement goals, namely improvement of response time, elimination of waste, and economies of scope. In more practical terms, it consisted in promoting the use of a series of world-class manufacturing improvement programs within the SME community and across a large range of industries.

Increasing the competitiveness of SMEs continues to be a significant challenge, and requires special attention in the current technological and economic context. Some governments have elected to support SMEs directly, through assistance programs. This paper considers one such program, concerned with the adoption of leading-edge production improvement practices. Based on a large-scale survey, the study extended the traditional use of data on production improvement practices dissemination by linking them to competitiveness. It led to the establishment of three competitive strategies, namely innovation, client orientation and productivity. Results provided by this study are extremely important for improving public promotion of manufacturing programs. For example, there is a need to present these practices not only in terms of their contribution to direct improvement goals (e.g. reduction of waste), as is often the case, but also to check how well they appear to suit the firm’s competitive context. At a practical level, the research may be able to help industry leaders and government stakeholders by proposing a better framework for analysis of a firm’s situation in terms of competitiveness. The results suggest that a more strategic interpretation of production improvement programs is required, and that this would lead to more appropriate, and hence more effective, government interventions. The results of the research also reflect the methodological choices made by the authors. It is possible that responses to the questionnaire depended to some extent on the number of value-added production practices used by the firms approached. Given that the questionnaire was composed mainly of questions relating to the firm’s use of a long list of practices, firms using fewer practices may have been less willing to spend time answering it due to lack of interest, meaning that the sample would contain a large number of firms making extensive use of the practices, and only a small number that do not. However, as levels of use are not known for the population as a whole, it is not possible to test for this possible bias. There are also some limitations to the comparison of practices between themselves, based on the same scale. The utility of the information presented here lies more in its identification of the most common methods for each practice, or conversely in the diversity of methods presented. Beyond these considerations, and despite the methodological limitations discussed earlier, the rigour of the approach does confer a certain level of validity on the findings. Despite its limitations, the study opens the door to many new paths for research. An in-depth study of how manufacturing SMEs use the best current and future (next two years) manufacturing and organizational practices would enable us to complete the transilience map. This new reference tool could then be used to position firms wishing to carry out benchmarking for the various practices.