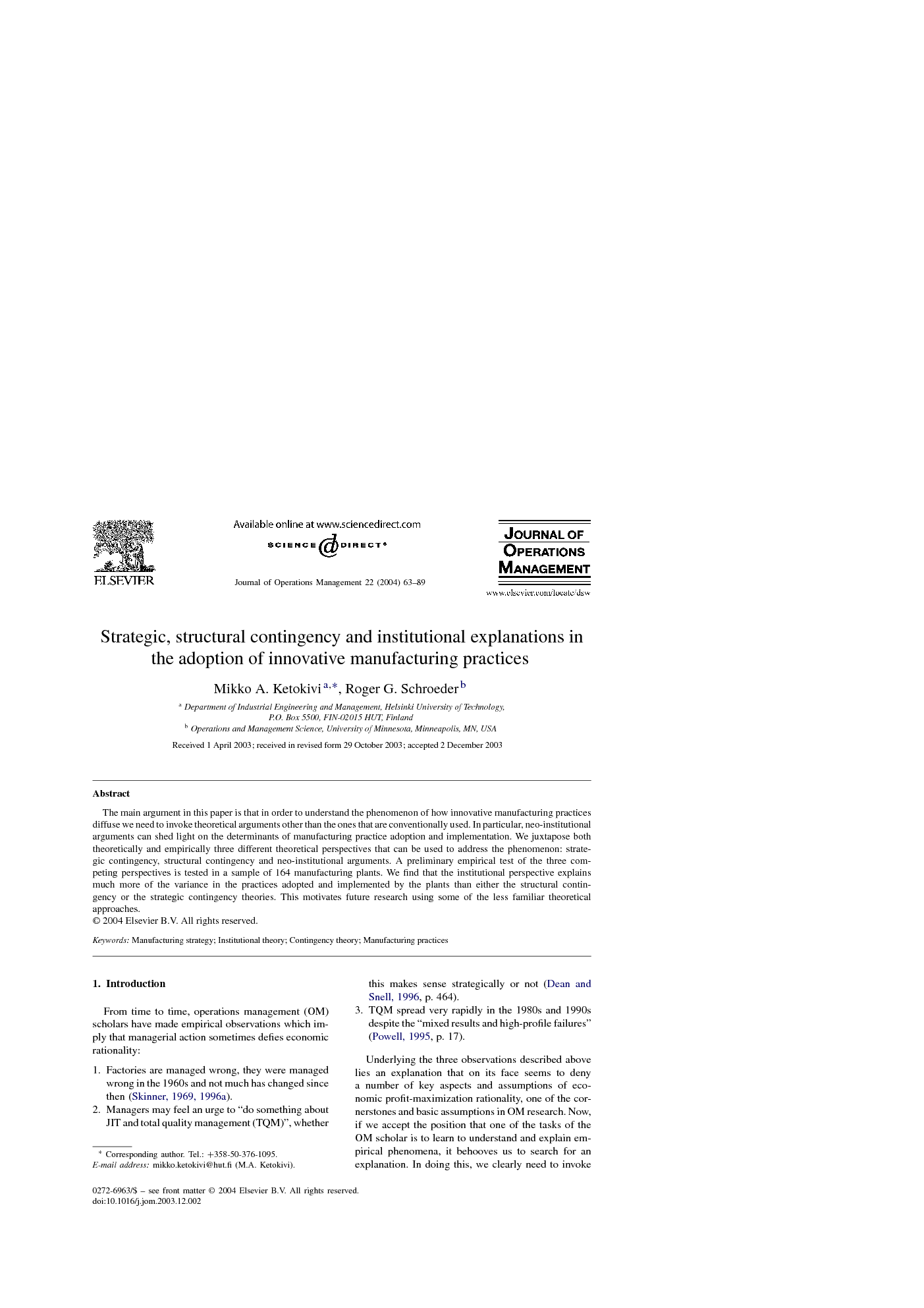 The main argument in this paper is that in order to understand the phenomenon of how innovative manufacturing practices diffuse we need to invoke theoretical arguments other than the ones that are conventionally used. In particular, neo-institutional arguments can shed light on the determinants of manufacturing practice adoption and implementation. We juxtapose both theoretically and empirically three different theoretical perspectives that can be used to address the phenomenon: strategic contingency, structural contingency and neo-institutional arguments. A preliminary empirical test of the three competing perspectives is tested in a sample of 164 manufacturing plants. We find that the institutional perspective explains much more of the variance in the practices adopted and implemented by the plants than either the structural contingency or the strategic contingency theories. This motivates future research using some of the less familiar theoretical approaches.

From time to time, operations management (OM) scholars have made empirical observations which imply that managerial action sometimes defies economic rationality: 1. Factories are managed wrong, they were managed wrong in the 1960s and not much has changed since then (Skinner, 1969 and Skinner, 1996a). 2. Managers may feel an urge to “do something about JIT and total quality management (TQM)”, whether this makes sense strategically or not (Dean and Snell, 1996, p. 464). 3. TQM spread very rapidly in the 1980s and 1990s despite the “mixed results and high-profile failures” (Powell, 1995, p. 17). Underlying the three observations described above lies an explanation that on its face seems to deny a number of key aspects and assumptions of economic profit-maximization rationality, one of the cornerstones and basic assumptions in OM research. Now, if we accept the position that one of the tasks of the OM scholar is to learn to understand and explain empirical phenomena, it behooves us to search for an explanation. In doing this, we clearly need to invoke theories somewhat different from the ones we have traditionally used. Theories used in OM research have traditionally—albeit often implicitly—been based on closed rational systems theory (Scott, 1998 [1981]) as well as applied microeconomics and organization economics (Banker and Khosla, 1995). More recently, open rational systems explanations, such as offshoots of the structural contingency theory, have been introduced (e.g., Kotha and Orne, 1989). In typical empirical studies, we often look at the different aspects of organizations such as manufacturing plants by breaking them down in a reductionist manner into their constituent parts, and then analyzing them—through methods akin to comparative structural analysis (Woodward, 1994 [1965])—to determine how variance in specific structural arrangements and organizational routines (e.g., manufacturing practices) correlates with operational and economic performance. This approach closely parallels input-heterogeneity arguments of applied organization-economic perspectives such as the resource-based view (Wernerfelt, 1984) and the related capability-based view (Teece et al., 1997). Not surprisingly, the resource-based view has gained much attention in OM theorizing as of late (e.g., Amundson, 1998, Schroeder et al., 2002 and Vastag, 2000). In order to address the phenomena described above, however, we must step outside the realm of strict profit-maximizing economic rationality. To this end, institutional theory has much to offer.

The central question in management research is “Why do some firms perform better than others?” In OM, we have often approached this question through large-sample comparative analyses of organizations (e.g., manufacturing plants). We have found that certain practices and structural arrangements are related to operational and financial performance, but little cumulative and systematic evidence exists. In this paper, we have approached manufacturing practices from what we consider a logically prior step to practice-performance studies. Specifically, we have examined what explains the adoption and implementation of manufacturing practices often associated with TQM and lean manufacturing. We posit a priori that we may need other than the conventional system-theoretic and organization-economic explanations to account for the phenomena our colleagues have observed and documented. We examine the implementation of specific manufacturing practices from three competing perspectives, two contingency perspectives and the institutional isomorphism perspective. Our first finding, that the contingency arguments do not adequately explain why certain plants adopt certain practices, echoes the results of extant research results in both the OM and organization theory literature. We further find that the institutional mimicry argument may have more merit in explaining the phenomenon. This implies that if we wish to explain the phenomenon, we must step outside our conventional ways of thinking. The economic variant of the institutional isomorphism argument is intuitive, close enough to conventional theories in OM and based on the evidence offered here a serious contender to conventional contingency explanations. However, we highlight the preliminary nature of these findings. Institutional arguments are ubiquitous in all management research, including OM. We have discussed the neo-institutional isomorphism argument to explain OM phenomena. Employing more realistic assumptions regarding managerial behavior, we conduct a preliminary test of the argument and find that this approach is likely much more fruitful in explaining observed phenomena than are our conventional contingency arguments. This warrants more empirical research into the determinants of organizational structure and adoption of practices. Because of the strong implications to practice-performance studies, examinations of these antecedents must not be sidestepped in OM research.