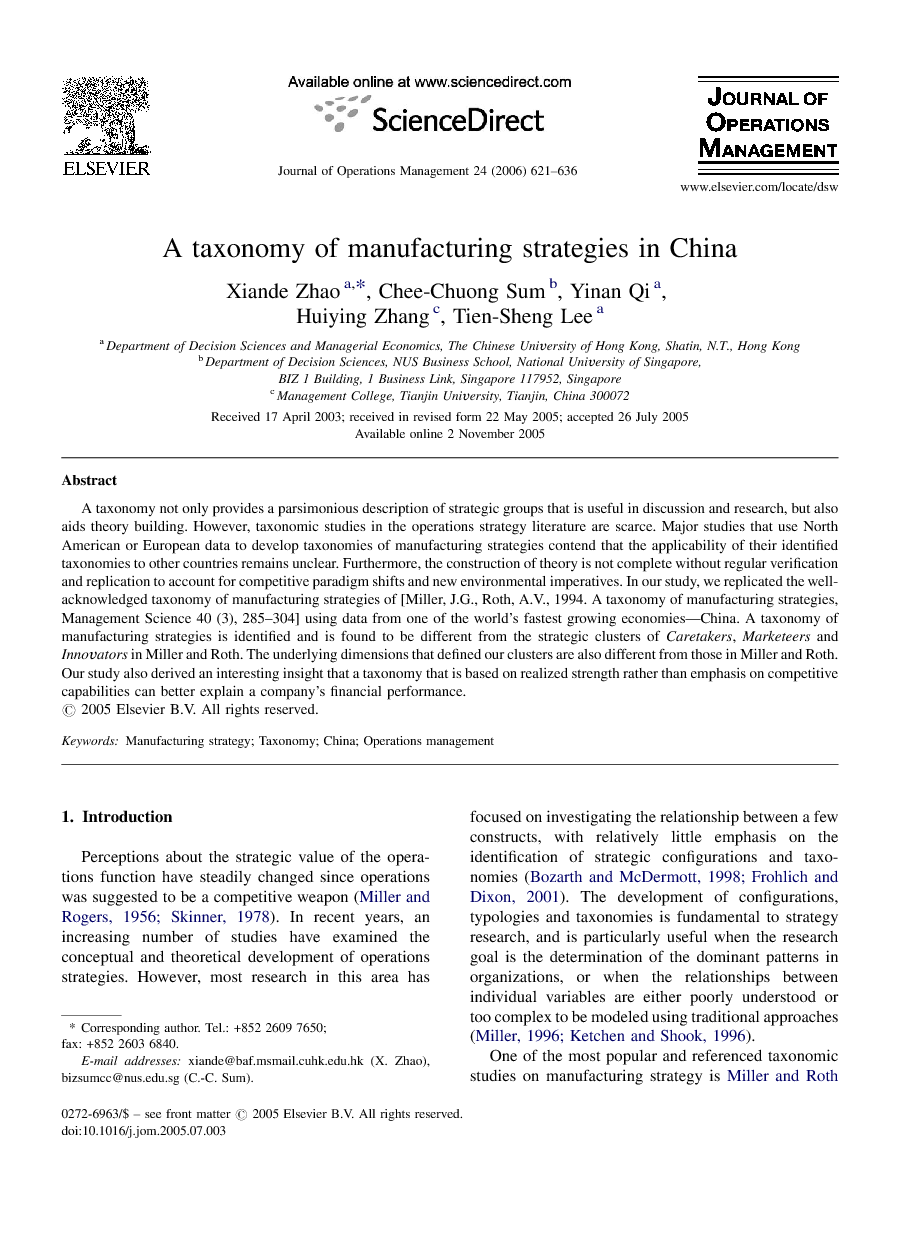 A taxonomy not only provides a parsimonious description of strategic groups that is useful in discussion and research, but also aids theory building. However, taxonomic studies in the operations strategy literature are scarce. Major studies that use North American or European data to develop taxonomies of manufacturing strategies contend that the applicability of their identified taxonomies to other countries remains unclear. Furthermore, the construction of theory is not complete without regular verification and replication to account for competitive paradigm shifts and new environmental imperatives. In our study, we replicated the well-acknowledged taxonomy of manufacturing strategies of [Miller, J.G., Roth, A.V., 1994. A taxonomy of manufacturing strategies, Management Science 40 (3), 285–304] using data from one of the world's fastest growing economies—China. A taxonomy of manufacturing strategies is identified and is found to be different from the strategic clusters of Caretakers, Marketeers and Innovators in Miller and Roth. The underlying dimensions that defined our clusters are also different from those in Miller and Roth. Our study also derived an interesting insight that a taxonomy that is based on realized strength rather than emphasis on competitive capabilities can better explain a company's financial performance.

Perceptions about the strategic value of the operations function have steadily changed since operations was suggested to be a competitive weapon (Miller and Rogers, 1956 and Skinner, 1978). In recent years, an increasing number of studies have examined the conceptual and theoretical development of operations strategies. However, most research in this area has focused on investigating the relationship between a few constructs, with relatively little emphasis on the identification of strategic configurations and taxonomies (Bozarth and McDermott, 1998 and Frohlich and Dixon, 2001). The development of configurations, typologies and taxonomies is fundamental to strategy research, and is particularly useful when the research goal is the determination of the dominant patterns in organizations, or when the relationships between individual variables are either poorly understood or too complex to be modeled using traditional approaches (Miller, 1996 and Ketchen and Shook, 1996). One of the most popular and referenced taxonomic studies on manufacturing strategy is Miller and Roth (1994). Using data collected in 1987 from US manufacturing companies, they identified three strategic types of manufacturers: Caretakers, Innovators and Marketeers. Miller and Roth (1994, p. 301) stated that “an important line of future research is to test the stability of this taxonomy globally, and over time.” The taxonomy of Miller and Roth (1994) was longitudinally replicated using a new set of US and global data in Frohlich and Dixon (2001). Although the taxonomy of Miller and Roth was partially supported, Frohlich and Dixon found that the Marketeers had been replaced by a new strategic type they called Designers. More importantly, they identified new strategic types (Idlers, Servers and Mass Customizers) from the global data that led them to caution researchers that the “North American model of manufacturing strategy should not be haphazardly applied to global data. It also raises the question of whether the new strategy types uncovered in this study are endogenous to each region, or if they will eventually diffuse to other parts of the world.” Frohlich and Dixon stated that their global findings required validation and replication. The need to periodically re-examine the clustering of manufacturing companies and to factor in context was further highlighted in Kathuria (2000). Frohlich and Dixon (2001) provided an in-depth review of the role and importance of replication in the construction of theory. Our study updates the literature on taxonomy using more recent data, and tests whether the taxonomy of Miller and Roth (1994) is applicable to one of the fastest growing economies in the world—China. From 1978 to 2002, China's real domestic product registered an average growth of 9.6% per year (China National Statistical Bureau, 2003). China is also exerting a growing influence on the world economy. Although China contributed only about 4% to the US$ 32 trillion world economy in 2002, it accounted for 17.5% of the growth in world GDP, second only to the US. Similarly, in the same year China accounted for about 5% of the total world manufacturing exports, but this represented 29% of the total growth in manufacturing output. China is thus making a highly disproportionate contribution to the growth dynamics of a sluggish world economy (Roach, 2003). In the 1980s and 1990s, many developed and emerging economies, such as the US, Taiwan, South Korea, Japan and Singapore, shifted their production bases to China where manufacturing costs were relatively lower. Although foreign investment remains an important trend, many Chinese manufacturing companies are currently competing both in the domestic and global markets where cost is not necessarily the key competitive requirement. There is no conclusive evidence to suggest that Chinese manufacturing companies are still competing primarily on cost-based paradigms. Indeed, Zhao et al. (2002) found that Chinese companies used different combinations of manufacturing capabilities to compete. Although China is becoming one of the world's largest manufacturing centers, relatively little is known about the manufacturing strategies adopted by Chinese manufacturers. To date, we have been unable to identify any study in the literature that has rigorously examined the manufacturing strategies of Chinese manufacturers. A taxonomy of manufacturing strategies will serve as a useful mechanism to better understand China's manufacturing role and position in the global marketplace. Furthermore, China's transformation from a centrally planned economy to a market economy presents unique problems and opportunities in the management of manufacturing activities, and makes China an interesting research setting for academics, practitioners and investors. A taxonomy of Chinese manufacturing strategies will enrich the operations strategy literature that has been built primarily from North American and European experiences. The objectives of our study are: 1. to identify a taxonomy of manufacturing strategies for Chinese companies; 2. to compare our taxonomy with the taxonomy of Miller and Roth (1994); 3. to examine the relationship between manufacturing strategy and financial performance.