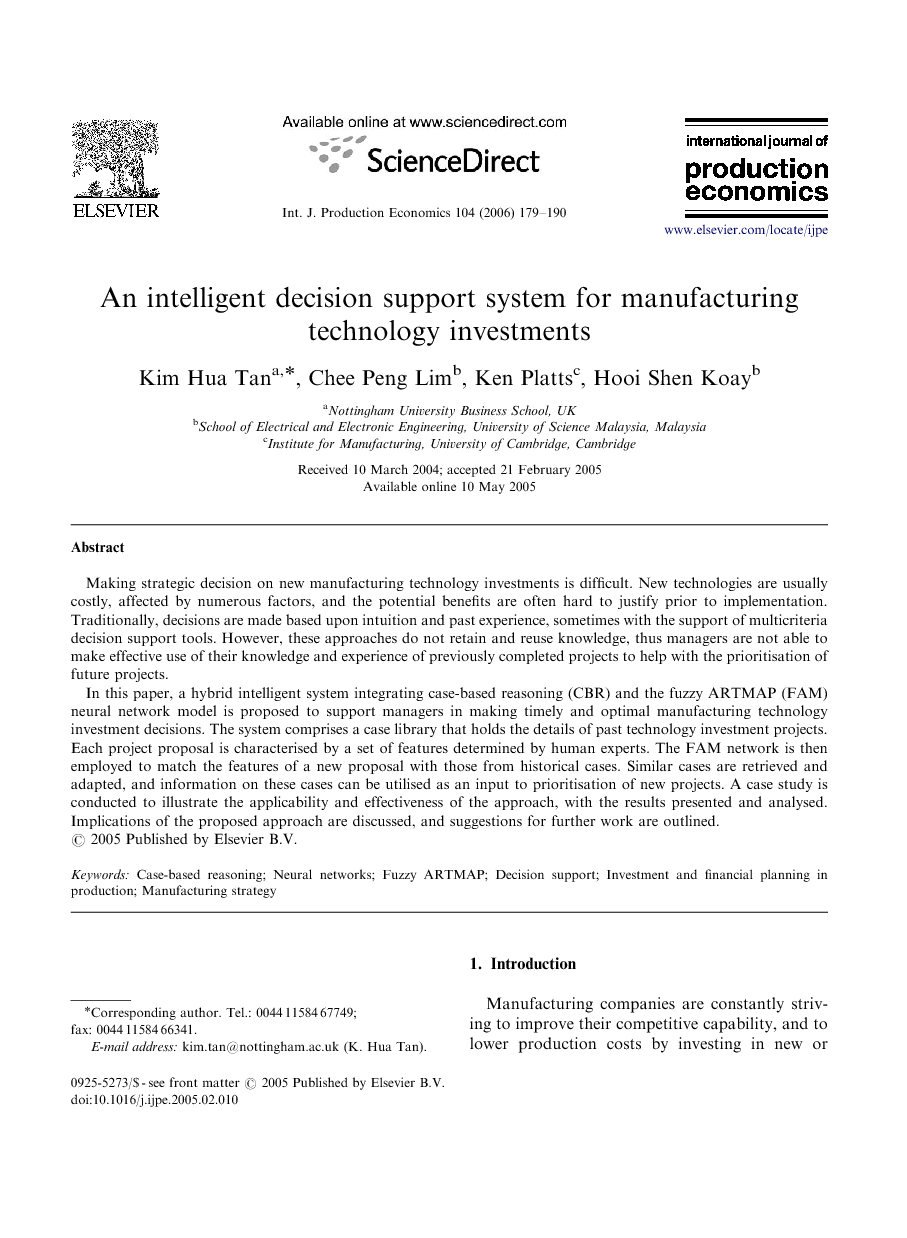 Making strategic decision on new manufacturing technology investments is difficult. New technologies are usually costly, affected by numerous factors, and the potential benefits are often hard to justify prior to implementation. Traditionally, decisions are made based upon intuition and past experience, sometimes with the support of multicriteria decision support tools. However, these approaches do not retain and reuse knowledge, thus managers are not able to make effective use of their knowledge and experience of previously completed projects to help with the prioritisation of future projects. In this paper, a hybrid intelligent system integrating case-based reasoning (CBR) and the fuzzy ARTMAP (FAM) neural network model is proposed to support managers in making timely and optimal manufacturing technology investment decisions. The system comprises a case library that holds the details of past technology investment projects. Each project proposal is characterised by a set of features determined by human experts. The FAM network is then employed to match the features of a new proposal with those from historical cases. Similar cases are retrieved and adapted, and information on these cases can be utilised as an input to prioritisation of new projects. A case study is conducted to illustrate the applicability and effectiveness of the approach, with the results presented and analysed. Implications of the proposed approach are discussed, and suggestions for further work are outlined.

In this paper, the development of an intelligent decision support system combining CBR and FAM for evaluation of MT projects is described. In the proposed system, CBR is utilised to support managers in retaining and reusing their previous knowledge on both successfully and unsuccessfully delivered projects to evaluate future projects. To address the stability–plasticity dilemma, FAM is incorporated into the developed system to support incremental learning in dynamic environment. Given a new project proposal, one (or more) similar case(s) will be retrieved from the case library. Information of the retrieved project(s) will be reused as a reference in evaluating the new project. Through the system, similar cases can be retrieved to enable managers to make effective use of their knowledge and experience. A series of experiments were conducted to assess the performance of proposed system. Two operating strategies of FAM, namely averaging and voting, were examined. The vigilance parameter was altered systematically to optimise the network performance. Good accuracy rates were achieved, with most of the results ranging from 80% to 90%. The best accuracy rate was 92.00% from voting FAM with View the MathML source. In addition, bootstrapping was employed to estimate the 95% confidence intervals of the average results. The small confidence bound associated with the best accuracy rate implied that the network performance was stable statistically. Evaluation by the domain experts on the usefulness of the proposed system was also conducted. Positive comments were obtained, and commitments to implement the proposed system in the real environment were given. Although encouraging results have been achieved, there are a number of aspects that need further investigations. First, more data samples have to be collected to further ascertain the effectiveness of the proposed system in MT project evaluation. It would be interesting if statistical estimates including risk factors could be incorporated into the network predictions. On the other hand, the outputs from FAM could be augmented with rules to explain the rationale used to reach a prediction. In this aspect, the FAM rule extraction technique exemplified in Carpenter and Tan (1995) can be examined. Further work will also focus on testing of the developed system in the real environment in collaboration with Company X. All these undertakings will lay a more comprehensive platform for managers to use the hybrid CBR—FAM-based system as a useful decision support tool in MT investment analysis.