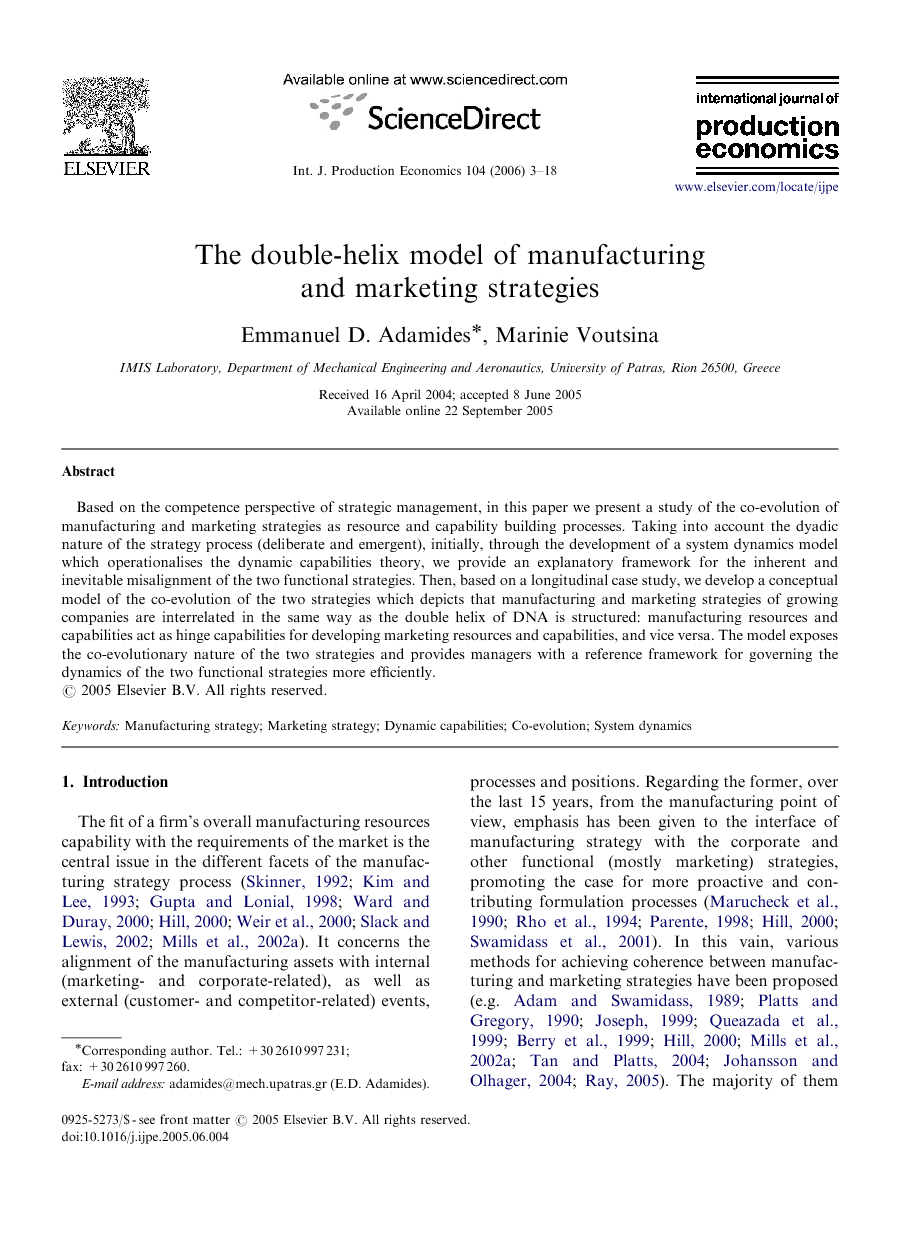 Based on the competence perspective of strategic management, in this paper we present a study of the co-evolution of manufacturing and marketing strategies as resource and capability building processes. Taking into account the dyadic nature of the strategy process (deliberate and emergent), initially, through the development of a system dynamics model which operationalises the dynamic capabilities theory, we provide an explanatory framework for the inherent and inevitable misalignment of the two functional strategies. Then, based on a longitudinal case study, we develop a conceptual model of the co-evolution of the two strategies which depicts that manufacturing and marketing strategies of growing companies are interrelated in the same way as the double helix of DNA is structured: manufacturing resources and capabilities act as hinge capabilities for developing marketing resources and capabilities, and vice versa. The model exposes the co-evolutionary nature of the two strategies and provides managers with a reference framework for governing the dynamics of the two functional strategies more efficiently.

The fit of a firm's overall manufacturing resources capability with the requirements of the market is the central issue in the different facets of the manufacturing strategy process (Skinner, 1992; Kim and Lee, 1993; Gupta and Lonial, 1998; Ward and Duray, 2000; Hill, 2000; Weir et al., 2000; Slack and Lewis, 2002; Mills et al., 2002a). It concerns the alignment of the manufacturing assets with internal (marketing- and corporate-related), as well as external (customer- and competitor-related) events, processes and positions. Regarding the former, over the last 15 years, from the manufacturing point of view, emphasis has been given to the interface of manufacturing strategy with the corporate and other functional (mostly marketing) strategies, promoting the case for more proactive and contributing formulation processes (Marucheck et al., 1990; Rho et al., 1994; Parente, 1998; Hill, 2000; Swamidass et al., 2001). In this vain, various methods for achieving coherence between manufacturing and marketing strategies have been proposed (e.g. Adam and Swamidass, 1989; Platts and Gregory, 1990; Joseph, 1999; Queazada et al., 1999; Berry et al., 1999; Hill, 2000; Mills et al., 2002a; Tan and Platts, 2004; Johansson and Olhager, 2004; Ray, 2005). The majority of them have been based on the assumption that equilibrium conditions exist, that all designed strategies are fully implemented, and that the strategic portfolio of the manufacturing function is basically restricted to them. The fact that marketing is an active entity which has its own strategies and builds capabilities that are influenced by, as much as they influence, manufacturing is not taken explicitly into account. In parallel, building on the resource-based view (RBV) of the firm, some authors have attempted to operationalise this view in the manufacturing strategy context (Stobaugh and Telesio, 1983; Swink and Hegarty, 1998; Slack and Lewis, 2002; Mills et al., 2002b). The importance of the sustainability of fit emerged in this direction of research, but the questions of how it evolves in dynamically changing conditions as a result of designed and emergent (Mintzberg and Waters, 1985) manufacturing and marketing strategies, and how it is influenced by the previous history of the firm (path dependence) has not been treated, so far, in an explicit way. Meanwhile, in the related domain of strategic management, new research streams have introduced more dynamic and eclectic (evolutionary and organic) views of strategic processes that divert from rational unitary actor models (Nelson and Winter, 1982; Barnett and Burgelman, 1996;Farjoun, 2002). Manufacturing and operations strategy research has not followed this path so far, and studies from the evolutionary perspective, using longitudinal data, is an almost completely neglected area (Parente, 1998; Pandža et al., 2003). Undoubtedly, however, such research procedures could provide useful insights on how strategy and performance at the functional level are determined in practice as a result of cognitive and organisational processes, and how they interact over time rather than what determines them in rather static and controlled situations. More specifically, this direction of research could contribute to the understanding of how scope (activities) and resources of the manufacturing and marketing functions interact over time as a result of these processes for achieving sustainable fit. Towards this aim, in this paper we seek to develop a model of the co-evolution of manufacturing and marketing strategies which can offer an explanatory framework for the achievement and sustainability of competitive advantage in environments of significant change. Such a model adheres to the current shift in strategic thinking from strategic choice to strategic change (Farjoun, 2002) and contributes to the achievement of the long-term objective of manufacturing strategic flexibility (Hayes et al., 1996). Our intention was to study the evolving strategies of the two functions from a systems point of view, rather than to elicit individual capability development mechanisms as those presented in Coates and McDermott (2002) and Pandža et al. (2003). As a result, the (systemic) competence theory of strategic management (Sanchez and Heene, 2004) was selected as a framework for analysing the relevant strategic processes. The research methodology used was empirical in nature consisting of a longitudinal analysis of a pharmaceuticals manufacturer's operation with a grounded type approach (Glaser and Strauss, 1967), and further assisted by system dynamics modelling. The model acted as an intermediary for theory development and was constructed in parallel with the analysis of the case. Modelling supported the inquiry, while findings of the analysis of the case were used for enriching and refining the model. Consequently, the example system dynamics model presented in the paper can rather be considered as a research instrument than, in a teleological manner, as a tool for assisting decision-making. The results of this research are summarised in the double-helix model that represents the co-evolution of manufacturing and marketing strategies of companies responding to change successfully. It is a three-dimensional visualisation construct that describes the way the two functions’ capabilities and activities co-evolve as the firm moves along different performance objectives in its search for dynamic fit in a changing environment. The contribution of this research is threefold: first, to reveal, through a longitudinal analysis, functional processes that have been missed in previous single event studies; secondly, to provide insights on the process, content and outcomes of the co-ordinated development and implementation of manufacturing and marketing strategies, so that managers have a reference framework for governing the dynamics of the two functional strategies more efficiently, and thirdly, to act a set of hypotheses for further empirical investigation. The rest of the paper is organised as follows: Section 2 puts manufacturing and marketing under the competence framework, while Section 3 develops an evolutionary perspective to it by means of a system dynamics model that includes the strategic logic necessary for achieving a sustainable fit. Section 4 presents a longitudinal case study of the interaction of manufacturing and marketing strategies of pharmaceuticals manufacturer as it was searching for competitive advantage in an environment of significant changes. Section 5 builds on the analysis of the case to introduce more qualitative constructs in the strategic processes discussed in Section 3, which, eventually, lead to the double-helix model. Finally, Section 6 concludes by listing management implications and some thoughts for further research.

Manufacturing and marketing are two functions with contradicting logics and objectives. Marketing has an explorative nature, continuously asking the other functions for product and service variety. Manufacturing rests on the opposite side demanding stability and the most efficient exploitation of its resources. In achieving their objectives, both functions develop assets which have different departure points and different time frames of accumulation, as a result of their individual architectures. In addition, they are subject to different uncertainties that frequently result in different strategies from those planned. In this paper, we have argued that in order to turn this inherent functional misalignment into a coherent long-term strategy, analytical single-event strategy formulation processes should be complemented with an evolutionary perspective. In such a perspective, the former are just episodes in the long-term evolution of the two functions. By following a grounded-type empirical research methodology supported by systems modelling, we have provided evidence that in growing companies that respond to the environmental change successfully, the evolution of the two strategies is, inevitably, in a continuous creative misalignment. What differentiates these companies from other less successful ones is that they use this inherent misalignment to power their growth. In addition to the theoretical contribution of the paper, the research methodology followed and the assumptions underlying the double-helix model suggest that in order to turn the co-evolution of both strategies into a structure with an ever-growing direction manufacturing firms should: • Map and understand their individual functional asset systems and their mechanisms of operation (reinforcing and constraining feedback loops) and cooperation which are jointly responsible for the performance of the firm. • Map and understand the interrelated past evolution of both functions’ assets whenever they plan for the future (not only a single function in a limited time frame as suggested by Mills et al. (2002a). Seeing the whole picture in both time and place makes managers put change into real (long-term) perspective and reduces strategic inertia. • Encourage functional visibility and collaboration between the manufacturing and marketing functions while maintaining, at the same time, internal markets. • As Itami (1987) has suggested, search for dynamic “fit” by both creating and destroying capabilities. Persistence in maintaining obsolete capabilities results not only in the waste of functional resources but most importantly in the disorientation of other functions, slowing down the overall growth of the firm. These constitute suggestions distilled from a study of explorative nature. The double-helix model has been founded theoretically and explored practically within the limitations of the case study method. Clearly, further empirical investigations are required to establish the model more concretely. The ideas presented in this paper and summarised in the model can act as the departure point.