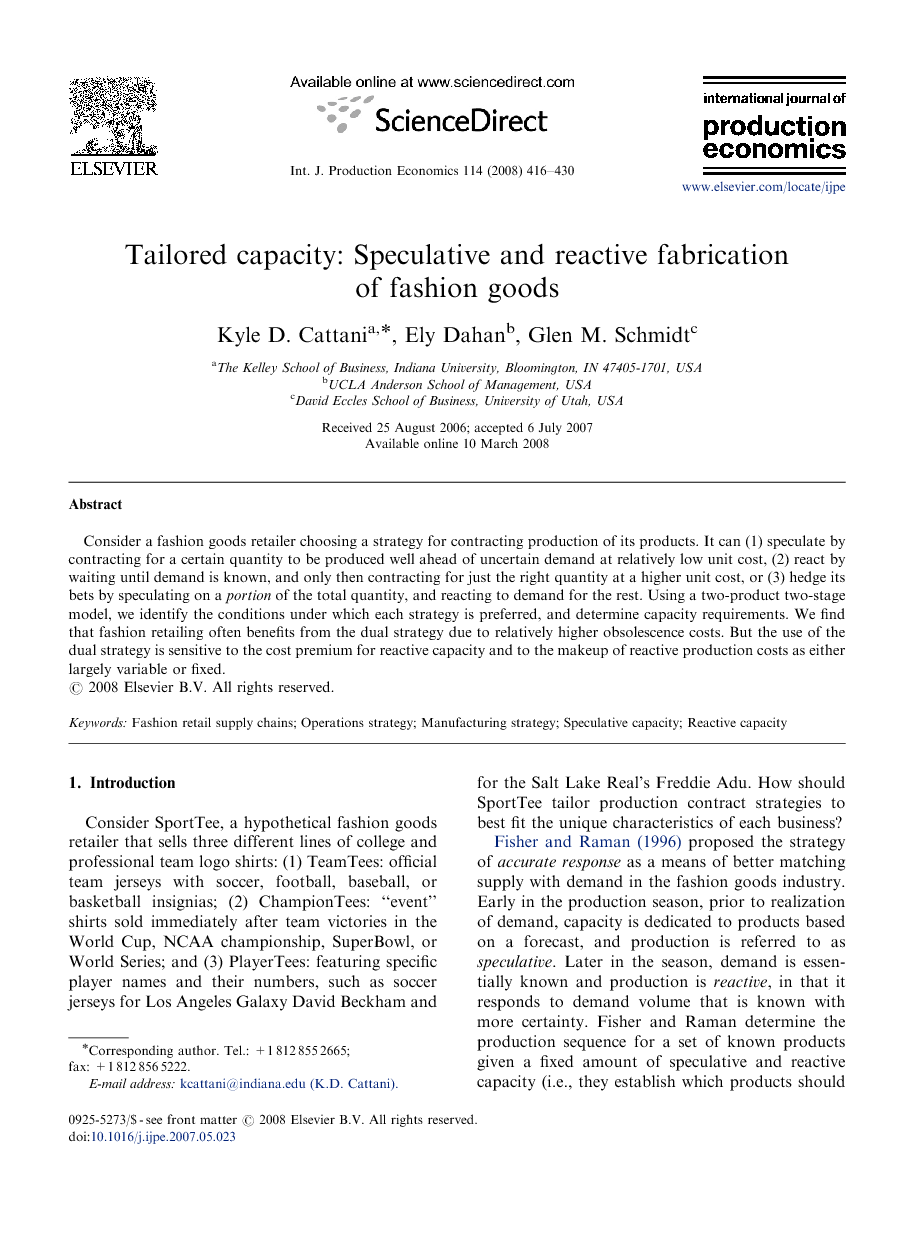 Consider a fashion goods retailer choosing a strategy for contracting production of its products. It can (1) speculate by contracting for a certain quantity to be produced well ahead of uncertain demand at relatively low unit cost, (2) react by waiting until demand is known, and only then contracting for just the right quantity at a higher unit cost, or (3) hedge its bets by speculating on a portion of the total quantity, and reacting to demand for the rest. Using a two-product two-stage model, we identify the conditions under which each strategy is preferred, and determine capacity requirements. We find that fashion retailing often benefits from the dual strategy due to relatively higher obsolescence costs. But the use of the dual strategy is sensitive to the cost premium for reactive capacity and to the makeup of reactive production costs as either largely variable or fixed.

We have examined how a firm might approach its capacity acquisition decisions in a setting similar to the ‘‘accurate response’’ situation analyzed by Fisher and Raman. While they assume the firm has an infinite level of speculative capacity and a pre-determined (or set) capacity level for reactive production, we analyze the case where the two capacity levels are endogenous with some simplifying assumptions. Our results suggest the firm may want to acquire capacity of only one type, or of both types, depending on the cost premium for reactive capacity. If the reactive capacity costs no more than the speculative type, then the firm uses only reactive capacity; it uses some of each type unless the cost premium for the reactive type is ‘‘too high,’’ in which case only the speculative type is used. While we make no formal assumption with regard to the relative costs of speculative and reactive capacities, it seems likely that reactive production capacity will be more expensive. In Fisher and Raman, the only explicit difference between the two types of capacity is in the timing of production—the firm operates a plant of a given fixed size nearly year-round, using that capacity in speculative fashion until a strong demand signal is received at its spring trade show, after which time the capacity represents the reactive type in that it can be used to respond to the better demand information. Thus, the cost difference between the two capacity types might appear to be zero, even though the value of reactive capacity to the firm clearly exceeds that of speculative capacity. When capacity is considered endogenously, it is likely that production capacity purchased in an open market would be priced differently depending on its ability to be flexible and reactive and depending on the time of the year. One can imagine other settings where speculative and reactive capacities are physically different, instead of differing in timing of production. For example, by pre-building items in speculative fashion, a firm can benefit from steady material flows that facilitate fewer setups and less complexity. On the other hand, reactive production possibly requires more sophisticated resources and plant flexibility, particularly as related to our two-product case. Given that the cost difference between the two capacity types determines the optimal level of each,initiatives such as flexible manufacturing, more efficient shop floor control resulting from more intense information processing, information sharing up and down the supply chain, and other supply chain improvements that reduce the cost of reactive capacity will give firms currently using a strict speculative approach an incentive to switch to a dual speculative/reactive strategy or even a strict reactive strategy.In addition to using the case of Sport Obermeyer to illustrate application to the fashion clothing retail industry, we discussed in the Introduction a hypothetical company, SportTee. In real life, Reebok faces related issues, as discussed in a case study by Parsons and Graves (2005). They use a combination of speculative and reactive capacity to produce team and player jerseys for the National Football League. The firm uses purely speculative capacity to make nameless team jerseys. For players of lesser popularity, the firm uses purely reactive capacity to sew the names on the jerseys in the USA. For the most popular players, speculative capacity is used to sew the player’s name on a fraction of jerseys in the Far East, followed by the use of reactive capacity to fill any remaining demand.Future work could address implications of a dual strategy approach not considered in our simplified setting. For example, we do not consider the marketing implications of reactive capacity. Customers may be willing to pay more for products customized to their specifications, made possible with the use of reactive capacity, as opposed to buying an off—theshelf product that may contain unwanted features or lack other desired features. The National Bicycle Industrial Company, as described by Fisher (1994), effectively uses reactive production for lower-volume, up-scale bikes, while sticking with speculative production for the more basic models. Thus the dual strategy expands its product line toward the upper end, and has significant implications on both overall product variety and product demand. At the same time there are potential negative market aspects of reactive production, such as customer impatience with possible delays in receiving goods produced reactively.The idea of postponement, as discussed by Lee and Tang (1997), is related to our notion of dual speculative/reactive capacities: postponement effectively involves initiating production of a given item using speculative production, and then completing it using reactive capacity after demand is realized. An extension of our model might examine whether postponement is preferred to the dual strategy that we analyze, or whether some combination of postponement and our dual strategy performs better than either methodology used individually.Extensions of our model to the case of correlated demand, and to more complicated cost structures,such as economies or diseconomies of scale, are other possible future research directions.We suspect that the results in Bengtsson and Olhager (2002),developed from option-pricing theory, would hold directionally in our setting, in that the value of flexibility increases with the number of products and decreases with more positively correlated demand. In summary, our model lends some understanding of the factors pushing the firm toward strictly speculative capacity, strictly reactive capacity, or a dual strategy approach that uses both. We have provided insights into the impact of product obsolescence costs, capacity costs, and the cost premium of flexible reactive production on the capacity choice. Our results suggest that by considering these factors in setting speculative capacity and reactive capacity levels, the firm can cope more profitably with uncertain demand.