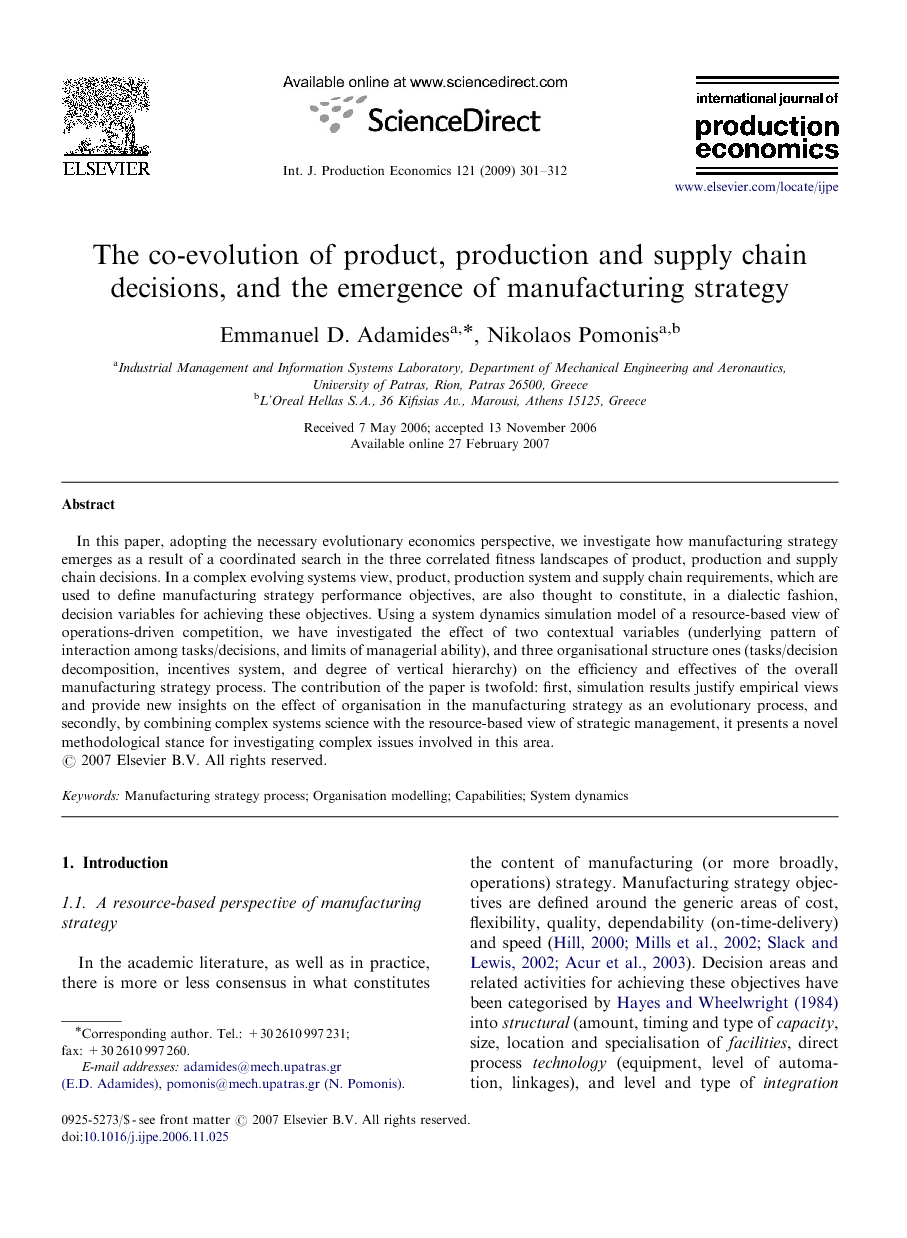 In this paper, adopting the necessary evolutionary economics perspective, we investigate how manufacturing strategy emerges as a result of a coordinated search in the three correlated fitness landscapes of product, production and supply chain decisions. In a complex evolving systems view, product, production system and supply chain requirements, which are used to define manufacturing strategy performance objectives, are also thought to constitute, in a dialectic fashion, decision variables for achieving these objectives. Using a system dynamics simulation model of a resource-based view of operations-driven competition, we have investigated the effect of two contextual variables (underlying pattern of interaction among tasks/decisions, and limits of managerial ability), and three organisational structure ones (tasks/decision decomposition, incentives system, and degree of vertical hierarchy) on the efficiency and effectives of the overall manufacturing strategy process. The contribution of the paper is twofold: first, simulation results justify empirical views and provide new insights on the effect of organisation in the manufacturing strategy as an evolutionary process, and secondly, by combining complex systems science with the resource-based view of strategic management, it presents a novel methodological stance for investigating complex issues involved in this area.

The rise of resource-based competition, the globalisation of sourcing and supply, and the move towards innovation-based economies impose the necessity for a new, complementary stance on the manufacturing/operations strategy process. Production, new product development and supply chain organisational units contribute equally to this functional strategy that has to be updated continuously as internal and external organisational conditions change very fast. Clearly, manufacturing/operations strategy is a dynamic process that has to be considered wide enough in both time and scope, not just a patchwork of independent static decisions. In addition to the ways each units develops its capabilities, the interaction of the three organisational units, and consequently the co-evolution of their strategic capabilities is a challenging task that requires a thorough investigation too. Towards this end, the contribution of the research presented in this paper lies along two dimensions. In the first, the simulation results justify empirical views and provide new insights on the effect of organisation in the manufacturing strategy process which may complement available knowledge on the content of operations strategy, as well as micro-level analyses of the process. In the second, the combination of complex systems science with the resource-based view of strategic management in a system dynamics model provides a novel methodological stance for investigating more complex issues involved in manufacturing and operations strategy. We believe that the interplay of this approach with methodologies of more empirical flavour which take into account specific contextual issues (i.e. how the three units interact in specific situations) can supply operations management with a methodological basis for researching its organisational and behavioural aspects at a more detained level. Our current work is in this direction.