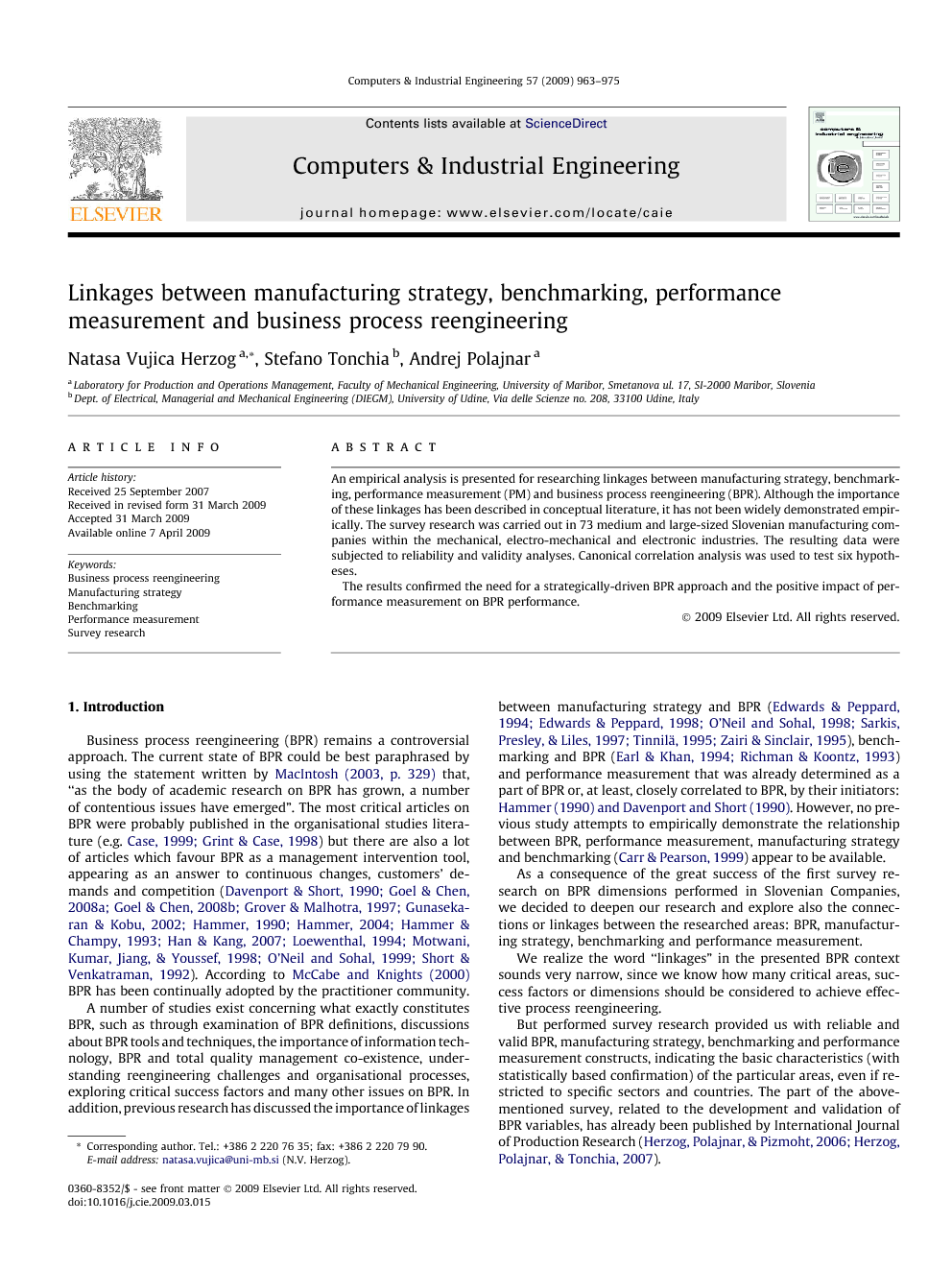 An empirical analysis is presented for researching linkages between manufacturing strategy, benchmarking, performance measurement (PM) and business process reengineering (BPR). Although the importance of these linkages has been described in conceptual literature, it has not been widely demonstrated empirically. The survey research was carried out in 73 medium and large-sized Slovenian manufacturing companies within the mechanical, electro-mechanical and electronic industries. The resulting data were subjected to reliability and validity analyses. Canonical correlation analysis was used to test six hypotheses. The results confirmed the need for a strategically-driven BPR approach and the positive impact of performance measurement on BPR performance.

Business process reengineering (BPR) remains a controversial approach. The current state of BPR could be best paraphrased by using the statement written by MacIntosh (2003, p. 329) that, “as the body of academic research on BPR has grown, a number of contentious issues have emerged”. The most critical articles on BPR were probably published in the organisational studies literature (e.g. Case, 1999 and Grint and Case, 1998) but there are also a lot of articles which favour BPR as a management intervention tool, appearing as an answer to continuous changes, customers’ demands and competition (Davenport and Short, 1990, Goel and Chen, 2008a, Goel and Chen, 2008b, Grover and Malhotra, 1997, Gunasekaran and Kobu, 2002, Hammer, 1990, Hammer, 2004, Hammer and Champy, 1993, Han and Kang, 2007, Loewenthal, 1994, Motwani et al., 1998, O’Neil and Sohal, 1999 and Short and Venkatraman, 1992). According to McCabe and Knights (2000) BPR has been continually adopted by the practitioner community. A number of studies exist concerning what exactly constitutes BPR, such as through examination of BPR definitions, discussions about BPR tools and techniques, the importance of information technology, BPR and total quality management co-existence, understanding reengineering challenges and organisational processes, exploring critical success factors and many other issues on BPR. In addition, previous research has discussed the importance of linkages between manufacturing strategy and BPR (Edwards and Peppard, 1994, Edwards and Peppard, 1998, O’Neil and Sohal, 1998, Sarkis et al., 1997, Tinnilä, 1995 and Zairi and Sinclair, 1995), benchmarking and BPR (Earl and Khan, 1994 and Richman and Koontz, 1993) and performance measurement that was already determined as a part of BPR or, at least, closely correlated to BPR, by their initiators: Hammer, 1990 and Davenport and Short, 1990. However, no previous study attempts to empirically demonstrate the relationship between BPR, performance measurement, manufacturing strategy and benchmarking (Carr & Pearson, 1999) appear to be available. As a consequence of the great success of the first survey research on BPR dimensions performed in Slovenian Companies, we decided to deepen our research and explore also the connections or linkages between the researched areas: BPR, manufacturing strategy, benchmarking and performance measurement. We realize the word “linkages” in the presented BPR context sounds very narrow, since we know how many critical areas, success factors or dimensions should be considered to achieve effective process reengineering. But performed survey research provided us with reliable and valid BPR, manufacturing strategy, benchmarking and performance measurement constructs, indicating the basic characteristics (with statistically based confirmation) of the particular areas, even if restricted to specific sectors and countries. The part of the above-mentioned survey, related to the development and validation of BPR variables, has already been published by International Journal of Production Research (Herzog et al., 2006 and Herzog et al., 2007). The deficiency of empirical research about BPR was also ascertained by the literature reviews for the period from 1999 to 2005, thus confirming the suitability and adequacy of the presented research. This article has been developed over the following sections. Section 2 presents a developed research framework and the main issues of BPR, based on literature review. Hypotheses have been generated in advance of the study, to be tested against the data collected. Section 3 describes the methodology, including variable measurement and the sampling and data collection procedures. Section 4 presents variable construction using PCA for validity, and Cronbach’s alpha for reliability. Newly developed variables are shown to be reliable and valid and, thus, adequate for canonical correlation analysis performance. Section 5 presents and discusses the results of descriptive statistics canonical correlation analysis. Finally, Section 6 the conclusions of this study are presented, along with suggestions for future research (Section 7).