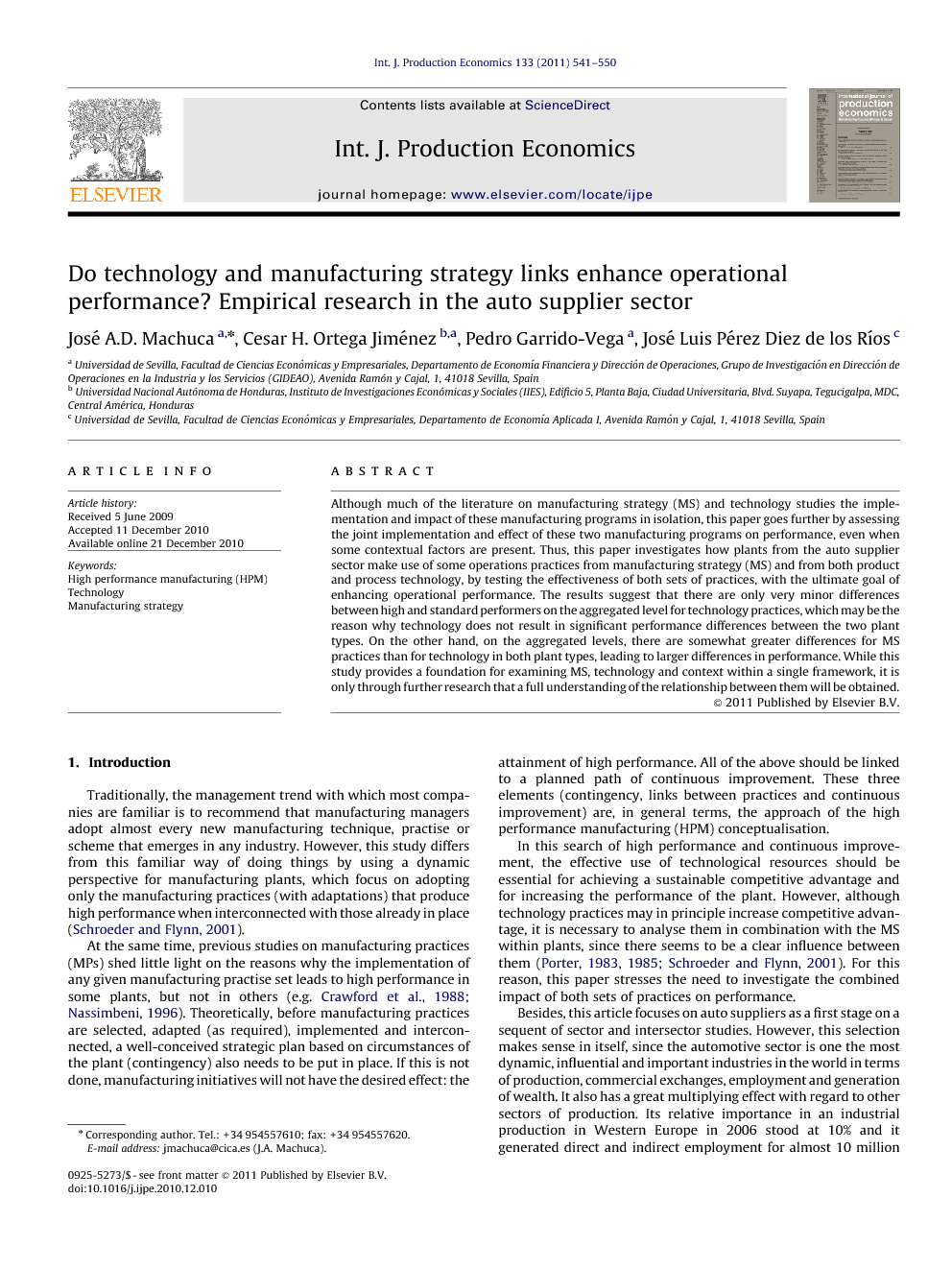 Although much of the literature on manufacturing strategy (MS) and technology studies the implementation and impact of these manufacturing programs in isolation, this paper goes further by assessing the joint implementation and effect of these two manufacturing programs on performance, even when some contextual factors are present. Thus, this paper investigates how plants from the auto supplier sector make use of some operations practices from manufacturing strategy (MS) and from both product and process technology, by testing the effectiveness of both sets of practices, with the ultimate goal of enhancing operational performance. The results suggest that there are only very minor differences between high and standard performers on the aggregated level for technology practices, which may be the reason why technology does not result in significant performance differences between the two plant types. On the other hand, on the aggregated levels, there are somewhat greater differences for MS practices than for technology in both plant types, leading to larger differences in performance. While this study provides a foundation for examining MS, technology and context within a single framework, it is only through further research that a full understanding of the relationship between them will be obtained.

Traditionally, the management trend with which most companies are familiar is to recommend that manufacturing managers adopt almost every new manufacturing technique, practise or scheme that emerges in any industry. However, this study differs from this familiar way of doing things by using a dynamic perspective for manufacturing plants, which focus on adopting only the manufacturing practices (with adaptations) that produce high performance when interconnected with those already in place (Schroeder and Flynn, 2001). At the same time, previous studies on manufacturing practices (MPs) shed little light on the reasons why the implementation of any given manufacturing practise set leads to high performance in some plants, but not in others (e.g. Crawford et al., 1988 and Nassimbeni, 1996). Theoretically, before manufacturing practices are selected, adapted (as required), implemented and interconnected, a well-conceived strategic plan based on circumstances of the plant (contingency) also needs to be put in place. If this is not done, manufacturing initiatives will not have the desired effect: the attainment of high performance. All of the above should be linked to a planned path of continuous improvement. These three elements (contingency, links between practices and continuous improvement) are, in general terms, the approach of the high performance manufacturing (HPM) conceptualisation. In this search of high performance and continuous improvement, the effective use of technological resources should be essential for achieving a sustainable competitive advantage and for increasing the performance of the plant. However, although technology practices may in principle increase competitive advantage, it is necessary to analyse them in combination with the MS within plants, since there seems to be a clear influence between them (Porter, 1983, Porter, 1985 and Schroeder and Flynn, 2001). For this reason, this paper stresses the need to investigate the combined impact of both sets of practices on performance. Besides, this article focuses on auto suppliers as a first stage on a sequent of sector and intersector studies. However, this selection makes sense in itself, since the automotive sector is one the most dynamic, influential and important industries in the world in terms of production, commercial exchanges, employment and generation of wealth. It also has a great multiplying effect with regard to other sectors of production. Its relative importance in an industrial production in Western Europe in 2006 stood at 10% and it generated direct and indirect employment for almost 10 million workers (BEFC, 2006). Of the 100 major transnational companies other than in the financial sector by volume of foreign assets, thirteen are in this sector (UNCTAD, 2009). Thus, it uses data on manufacturing strategy practices, technology practices and operational performance dimensions collected from 90 auto supplier plants which responded to a survey from research teams located in ten countries selected as a major part of the industrialised world in North America, Europe and Asia Drawing upon the previously mentioned approach, this article takes a set of manufacturing strategy practices and a set of technology practices as a starting point to investigate how auto supplier plants make use of MPs, by testing the impact of both of these sets on an operational performance. Thus, next (Section 2), this paper discusses the concepts and constructs used in this study. A brief review is made of bibliography related to possible impacts on performance, and some possible relationships from the framework of this study are presented, the models are proposed and the respective hypotheses described. Subsequently (Section 3), the research methodology used in this article is described and the analytical methodology discussed. The results are given in Section 4. Finally, in Section 5, the conclusions and final considerations are set out, highlighting the implications and limitations of the research.

Using the universal perspective of fit, this paper examined whether manufacturing strategy and/or technology were per se effective in improving an operational performance in a two stage approach: (1) in the presence of each other and (2) when contextual factors are present. The results show that manufacturing strategy has a positive relationship with performance, and continues to do so even when contextual factors are present. However, technology does not have a positive relationship with performance in either case. Despite the above, it is necessary to continue testing the hypothesis in the future with different data and a different level of dimensions in order to preclude any doubt about whether the results reflect the true state of the technology–performance relationship or not. With regard to the sector under study, it can be stated that it is fairly homogeneous as far as the type of plant, and the degree to which manufacturing strategy and technology are concerned. This may in part be due to the dynamic and drastic changes that the sector is currently experiencing. This is leading plants to continuous improvement on the road to high performance, as reflected in the results of our analysis and in the few differences that can be appreciated in the sector (Ortega, 2007; Ortega et al., 2008). In other regards, it is important to evaluate the entire study critically, since, as with all research work, this paper has limitations. However, some of these limitations may be seen as fertile fields for future research on the same topics. As is the case with any empirical research, the results and conclusions of studies like this should be welcomed with caution, due to the restraints imposed by the techniques and constructs on which they are proposed, as explained in more detail on the next paragraph. Similarly – and being mindful that this is a sector study (the sample consists of auto supplier plants) – the results may provide some inferential benefits for the population analysed, but their extrapolation to any other group may well be futile. Therefore, this leaves room for research to test for industry differences as a contingency. Thus, in a work in progress, the models are being tested with the samples from the other two industrial sectors (electronics and machinery) in order to analyse and compare the interrelationship by sectors before doing an intersectoral study. Likewise, it is necessary to remember that the size of the plants analysed (more than 100 workers) may make the results of the study invalid for smaller companies. As far as the limitations of the obtained results are concerned, while they suggest that the implementation of manufacturing practices from only MS and not from technology can mask the possible effect of contextual factors on performance, future studies should investigate the possible interaction effects of other contextual factors and manufacturing practices on performance. For instance, a future research study could be a more detailed examination of the relationships between the two programs and other contextual factors, which may identify the exact nature of the interaction between practices and context. Furthermore, the international HPM Project is a cross-sectional research project (with very little longitudinal data): a snapshot tailored to the sample. This limits the possibilities of analysing dynamic changes in the sample plants. Also, it is important to remember that the correlation between two variables does not necessarily mean that there is causality between them. Two variables may be highly correlated without there being any logical explanation for this (Richardson and Pugh, 1981; Norusis, 1997). Therefore, although the perspectives, discussed here, have been based on static cross-section approaches, specifying and testing fit and interrelationship between practices is a never-ending dynamic job, where the plant is continuously aiming at a moving target. Hence, no plant enjoys a perfect state of dynamic fit, but may be moving towards such a state. Although a small number of conceptual papers on the dynamic perspective of fit exist, no empirical studies can be found, either with the perspectives of this study or of others which would prove such theories. Regardless of the fact that this paper does not attempt to study dynamism, we acknowledge that this is a promising area for research and for the development of appropriate mechanisms in order to test fit within a longitudinal perspective. Finally, the universal model used here imposes a linear correspondence between manufacturing strategy or technology and the respective direct result of their links with performance. This fit form – primarily of linear correspondence – does not take more complex relationships into account, such as manufacturing practise links: i.e. it includes no explicit recognition that the effect of one variable depends on the presence or magnitude of other variables. Additive models can limit understanding of management by representing its causes and effects (e.g. MS and/or technology causes and performance effects) as universal rather than conditional on a context of other variables, such as other manufacturing practices. Moreover universalistic theories of organisation claim that there is only “one best way” to organise, meaning that maximum organisational performance comes from the maximum level of one or both variables with no conditions between them. However, this limitation may be overcome by the future research using the contingency theory, which asserts that maximum performance results from adopting the appropriate level of one of the variables that fits the other. This could extend this study from another perspective, such as selection or interaction, in order to outline hypotheses regarding the dependencies between the fit of both manufacturing practices and the link between fit and performance. This would allow us to answer the question whether an improved operational performance might result from the interaction between manufacturing strategy and technology to be explored.