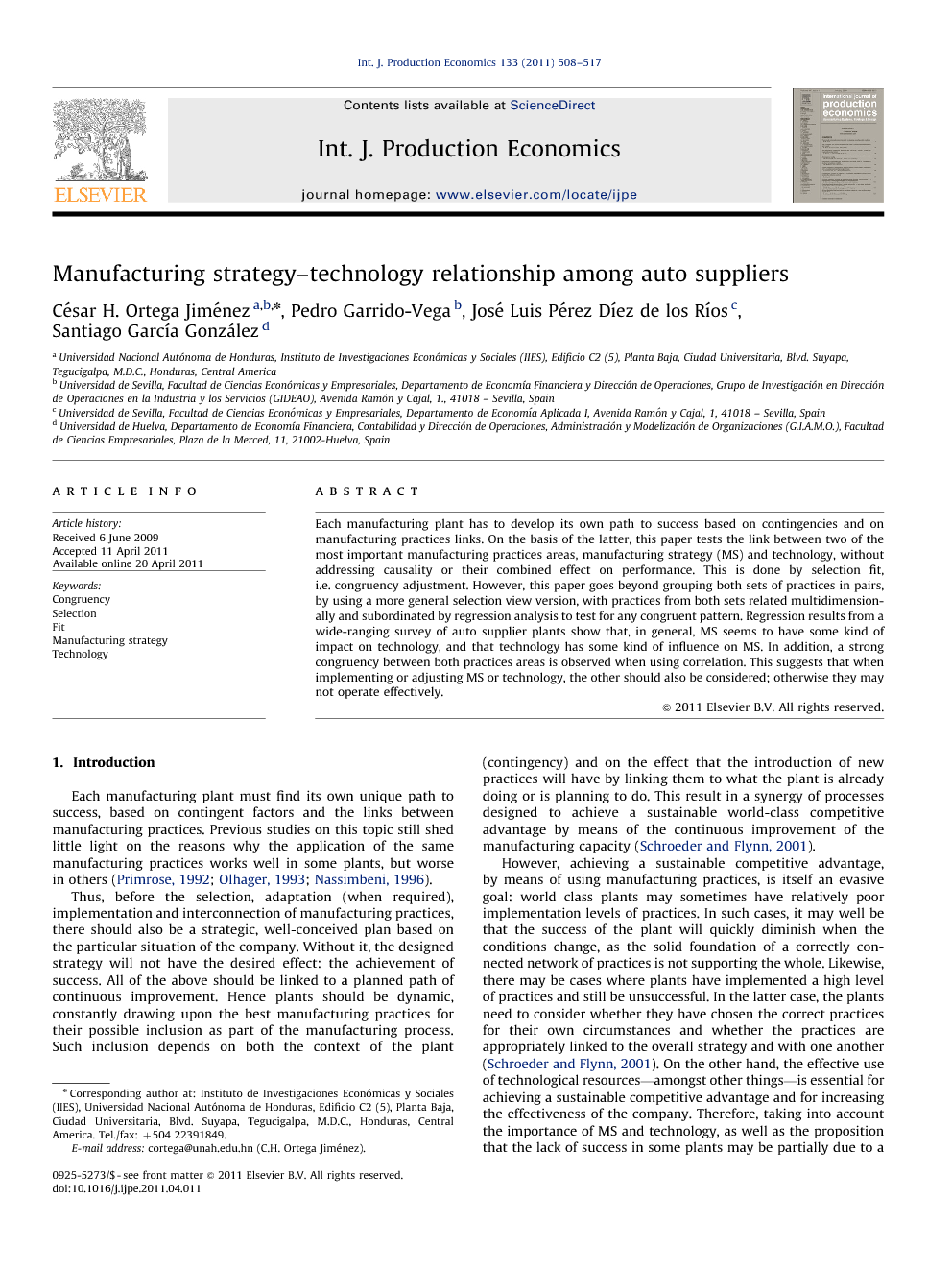 Each manufacturing plant has to develop its own path to success based on contingencies and on manufacturing practices links. On the basis of the latter, this paper tests the link between two of the most important manufacturing practices areas, manufacturing strategy (MS) and technology, without addressing causality or their combined effect on performance. This is done by selection fit, i.e. congruency adjustment. However, this paper goes beyond grouping both sets of practices in pairs, by using a more general selection view version, with practices from both sets related multidimensionally and subordinated by regression analysis to test for any congruent pattern. Regression results from a wide-ranging survey of auto supplier plants show that, in general, MS seems to have some kind of impact on technology, and that technology has some kind of influence on MS. In addition, a strong congruency between both practices areas is observed when using correlation. This suggests that when implementing or adjusting MS or technology, the other should also be considered; otherwise they may not operate effectively.

Each manufacturing plant must find its own unique path to success, based on contingent factors and the links between manufacturing practices. Previous studies on this topic still shed little light on the reasons why the application of the same manufacturing practices works well in some plants, but worse in others (Primrose, 1992, Olhager, 1993 and Nassimbeni, 1996). Thus, before the selection, adaptation (when required), implementation and interconnection of manufacturing practices, there should also be a strategic, well-conceived plan based on the particular situation of the company. Without it, the designed strategy will not have the desired effect: the achievement of success. All of the above should be linked to a planned path of continuous improvement. Hence plants should be dynamic, constantly drawing upon the best manufacturing practices for their possible inclusion as part of the manufacturing process. Such inclusion depends on both the context of the plant (contingency) and on the effect that the introduction of new practices will have by linking them to what the plant is already doing or is planning to do. This result in a synergy of processes designed to achieve a sustainable world-class competitive advantage by means of the continuous improvement of the manufacturing capacity (Schroeder and Flynn, 2001). However, achieving a sustainable competitive advantage, by means of using manufacturing practices, is itself an evasive goal: world class plants may sometimes have relatively poor implementation levels of practices. In such cases, it may well be that the success of the plant will quickly diminish when the conditions change, as the solid foundation of a correctly connected network of practices is not supporting the whole. Likewise, there may be cases where plants have implemented a high level of practices and still be unsuccessful. In the latter case, the plants need to consider whether they have chosen the correct practices for their own circumstances and whether the practices are appropriately linked to the overall strategy and with one another (Schroeder and Flynn, 2001). On the other hand, the effective use of technological resources—amongst other things—is essential for achieving a sustainable competitive advantage and for increasing the effectiveness of the company. Therefore, taking into account the importance of MS and technology, as well as the proposition that the lack of success in some plants may be partially due to a faulty link between practices (Schroeder and Flynn, 2001), the present study examines the link between practices from manufacturing strategy (MS) and from technology from an international auto supplier sector survey. The need to investigate the interconnection between strategy and technology has also been stressed by Porter, 1983 and Porter, 1985. Accordingly, the present paper is primarily centered on the following research question: are there any links between practices from manufacturing strategy and practices from technology? This is answered by way of exploratory and confirmatory research. A review of the literature is made in Section 2. Research propositions are described in Section 3 along with their respective hypotheses. The research methodology of this work is explained in Section 4, describing the constructs and concepts used. Subsequently (Section 5), the results are discussed. Finally, in Section 6, some conclusions and final considerations are outlined, highlighting the implications and limitations of this study.