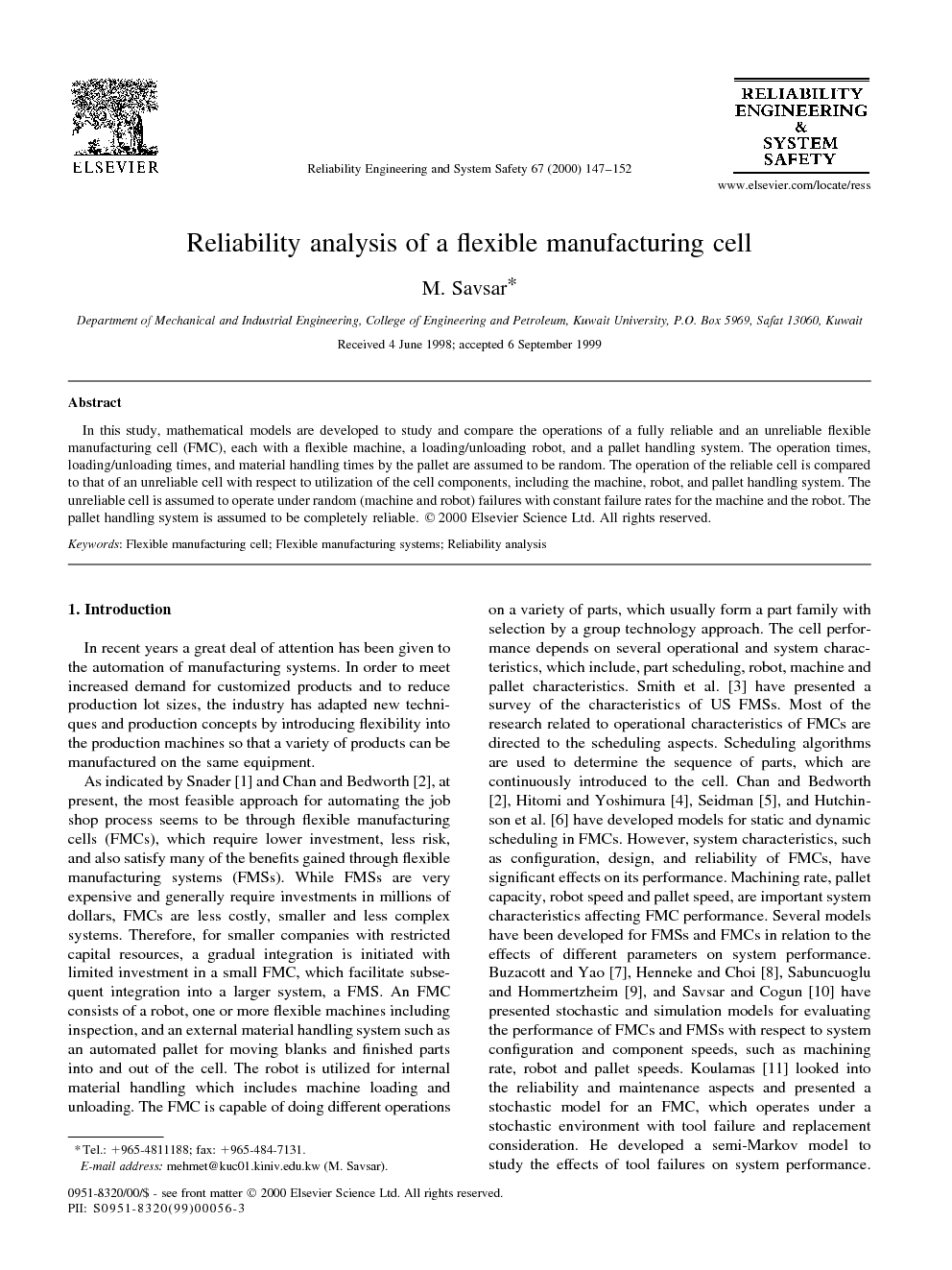 In recent years a great deal of attention has been given to the automation of manufacturing systems. In order to meet increased demand for customized products and to reduce production lot sizes, the industry has adapted new techniques and production concepts by introducing flexibility into the production machines so that a variety of products can be manufactured on the same equipment. As indicated by Snader [1] and Chan and Bedworth [2], at present, the most feasible approach for automating the job shop process seems to be through flexible manufacturing cells (FMCs), which require lower investment, less risk, and also satisfy many of the benefits gained through flexible manufacturing systems (FMSs). While FMSs are very expensive and generally require investments in millions of dollars, FMCs are less costly, smaller and less complex systems. Therefore, for smaller companies with restricted capital resources, a gradual integration is initiated with limited investment in a small FMC, which facilitate subsequent integration into a larger system, a FMS. An FMC consists of a robot, one or more flexible machines including inspection, and an external material handling system such as an automated pallet for moving blanks and finished parts into and out of the cell. The robot is utilized for internal material handling which includes machine loading and unloading. The FMC is capable of doing different operations on a variety of parts, which usually form a part family with selection by a group technology approach. The cell performance depends on several operational and system characteristics, which include, part scheduling, robot, machine and pallet characteristics. Smith et al. [3] have presented a survey of the characteristics of US FMSs. Most of the research related to operational characteristics of FMCs are directed to the scheduling aspects. Scheduling algorithms are used to determine the sequence of parts, which are continuously introduced to the cell. Chan and Bedworth [2], Hitomi and Yoshimura [4], Seidman [5], and Hutchinson et al. [6] have developed models for static and dynamic scheduling in FMCs. However, system characteristics, such as configuration, design, and reliability of FMCs, have significant effects on its performance. Machining rate, pallet capacity, robot speed and pallet speed, are important system characteristics affecting FMC performance. Several models have been developed for FMSs and FMCs in relation to the effects of different parameters on system performance. Buzacott and Yao [7], Henneke and Choi [8], Sabuncuoglu and Hommertzheim [9], and Savsar and Cogun [10] have presented stochastic and simulation models for evaluating the performance of FMCs and FMSs with respect to system configuration and component speeds, such as machining rate, robot and pallet speeds. Koulamas [11] looked into the reliability and maintenance aspects and presented a stochastic model for an FMC, which operates under a stochastic environment with tool failure and replacement consideration. He developed a semi-Markov model to study the effects of tool failures on system performance. Thus, with the exception of the study by Koulamas [11], previous researches have been mostly directed to the scheduling aspects of reliable FMC systems. Not much research has been done on the reliability aspects of such systems. Vineyard and Meredith [12] have looked into the effects of maintenance policies on FMS failures by studying some real systems using simulation. Their conclusion suggests that the FMSs experience four times more wear and tear during their useful life than the traditional machine tools. This is mainly because of the accelerated usage of the FMSs during their useful life. Past studies, such as Smith [3], indicate that while the FMS and FMC systems typically operate 70–80% of the time during their useful life, the traditional machine tools are only utilized 20% of the time during their useful life. Therefore, reliability analysis of flexible systems is extremely important in understanding and increasing the utilization and productivity of such systems.

FMCs are gaining wide acceptance in today's dynamic manufacturing environment. Thus, reliability analysis of FMC systems is also important. While reliability modeling of traditional machines and production systems has been subject of extensive research over the past several years, only few researches could be found on reliability studies of FMC systems. The stochastic models and the closed form solution formulas obtained in this paper could be used to analyze the productivity of a FMC under different failure, repair, and other operational characteristics. The formulas are relatively simple and can be used with simple calculations to obtain exact solutions. The models presented here could be extended to the case where two machine tools are served by a single robot and a pallet handling system. Production machines could work in series or in parallel. Reliability analysis of such systems is useful in determining the exact production output rates of the FMC or utilization of system components.