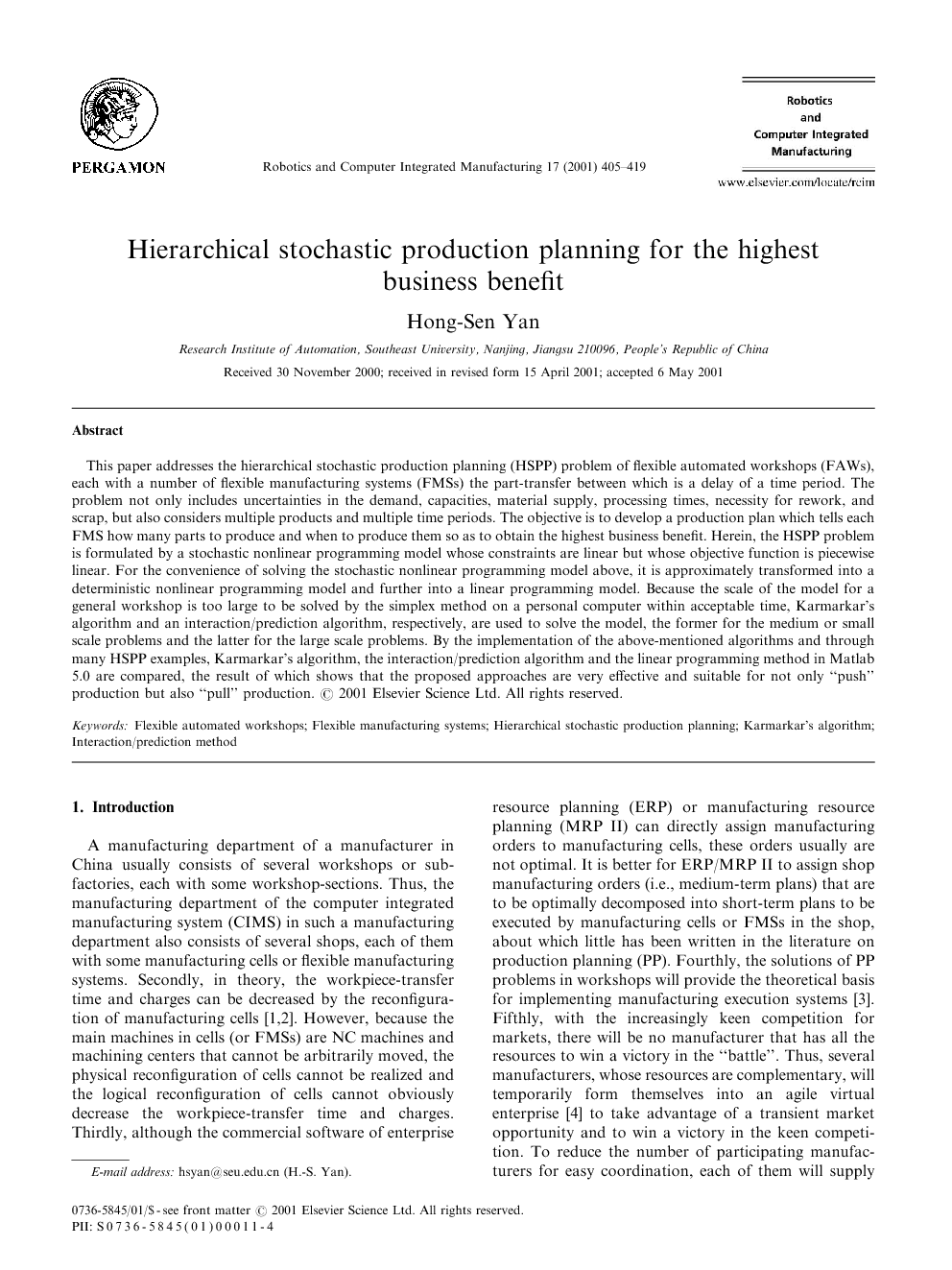 This paper addresses the hierarchical stochastic production planning (HSPP) problem of flexible automated workshops (FAWs), each with a number of flexible manufacturing systems (FMSs) the part-transfer between which is a delay of a time period. The problem not only includes uncertainties in the demand, capacities, material supply, processing times, necessity for rework, and scrap, but also considers multiple products and multiple time periods. The objective is to develop a production plan which tells each FMS how many parts to produce and when to produce them so as to obtain the highest business benefit. Herein, the HSPP problem is formulated by a stochastic nonlinear programming model whose constraints are linear but whose objective function is piecewise linear. For the convenience of solving the stochastic nonlinear programming model above, it is approximately transformed into a deterministic nonlinear programming model and further into a linear programming model. Because the scale of the model for a general workshop is too large to be solved by the simplex method on a personal computer within acceptable time, Karmarkar's algorithm and an interaction/prediction algorithm, respectively, are used to solve the model, the former for the medium or small scale problems and the latter for the large scale problems. By the implementation of the above-mentioned algorithms and through many HSPP examples, Karmarkar's algorithm, the interaction/prediction algorithm and the linear programming method in Matlab 5.0 are compared, the result of which shows that the proposed approaches are very effective and suitable for not only “push” production but also “pull” production.

A manufacturing department of a manufacturer in China usually consists of several workshops or sub-factories, each with some workshop-sections. Thus, the manufacturing department of the computer integrated manufacturing system (CIMS) in such a manufacturing department also consists of several shops, each of them with some manufacturing cells or flexible manufacturing systems. Secondly, in theory, the workpiece-transfer time and charges can be decreased by the reconfiguration of manufacturing cells [1] and [2]. However, because the main machines in cells (or FMSs) are NC machines and machining centers that cannot be arbitrarily moved, the physical reconfiguration of cells cannot be realized and the logical reconfiguration of cells cannot obviously decrease the workpiece-transfer time and charges. Thirdly, although the commercial software of enterprise resource planning (ERP) or manufacturing resource planning (MRP II) can directly assign manufacturing orders to manufacturing cells, these orders usually are not optimal. It is better for ERP/MRP II to assign shop manufacturing orders (i.e., medium-term plans) that are to be optimally decomposed into short-term plans to be executed by manufacturing cells or FMSs in the shop, about which little has been written in the literature on production planning (PP). Fourthly, the solutions of PP problems in workshops will provide the theoretical basis for implementing manufacturing execution systems [3]. Fifthly, with the increasingly keen competition for markets, there will be no manufacturer that has all the resources to win a victory in the “battle”. Thus, several manufacturers, whose resources are complementary, will temporarily form themselves into an agile virtual enterprise [4] to take advantage of a transient market opportunity and to win a victory in the keen competition. To reduce the number of participating manufacturers for easy coordination, each of them will supply the agile virtual enterprise with as many required resources as possible. Hence, a participating manufacturer will probably supply the agile virtual enterprise with shops which are taken as manufacturing resources. In such a manufacturing environment, a shop is empowered to organize production autonomously, according to manufacturing orders (product demand plans) not only from the manufacturer (which it belongs to) but also from the agile virtual enterprise (which it belongs to), which generates more uncertainty in the product demand than the traditional production. Besides, the equipment capacity in the shop is uncertain because of unplanned maintenance and the material supply for the shop is also uncertain because of the supplier's capacity and the material quality. Thus, the shop can be taken, to some extent, as a stochastic manufacturing system. On the other hand, the production planning in a manufacturing setting is essential to efficient resource allocation over time while satisfying demands for finished products [5]. Therefore, the problem of stochastic production planning (SPP) for a flexible automated workshop (FAW) consisting of FMSs (or cells) is important and worth studying.

This paper explores the hierarchical stochastic production planning problem of flexible automated workshops with delay interaction. First of all, the HSPP problem is formulated by a stochastic nonlinear programming model whose constraints are linear but whose objective function is piecewise linear. The objective is to decompose medium-term random product demand plans into short-term stochastic production plans for the highest business benefit. For the convenience of solving the stochastic nonlinear programming model, it is transformed into a deterministic nonlinear programming model and further into a linear programming one. Because the scale of the model for a general workshop is too large to be solved by the simplex method on a personal computer within acceptable time, Karmarkar's algorithm and Algorithm 1, respectively are adopted in solving the model. By implementing the above-mentioned algorithms, many examples of HSPP have been studied, with the result showing that